"That feeling when I could just say 'I have won the National Lottery' is a moment I will never forget."

by SWNS
in Lotto 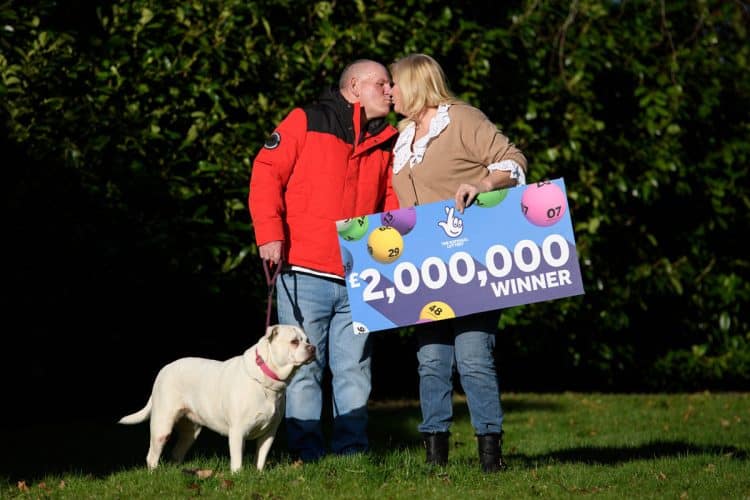 A factory worker who was able to quit work after he scooped £2million prize on a scratch card says he almost didn’t buy one – because of road works outside the shop.

Ian Black, 61, was able to quit work at the Pirelli factory in Carlisle, Cumbria, after 40 years when he scooped the jackpot at the shop on his way home from work.

He picked up the National Lottery scratch card as he stopped to buy a newspaper on the way home from a night shift as he always did.

He almost didn’t bother to stop at the his regular shop as roadworks outside have been known to put an extra half an hour on commuter’s journeys.

But he went in for his paper and tried his luck on a Monopoly Deluxe scratch card when it caught his eye.

And when an excited Ian rushed home to tell his wife Sandra, 55, to ‘come downstairs and check something’, she feared something had happened to one of their three dogs.

Ian said: “I don’t think I have even seen that many zeros. I kept questioning, is this really £2m?

“I immediately phoned work and said to them I wouldn’t be in that day, adding, actually I don’t think I will be in this week, or actually ever again.

“My boss, understandably, sounded really shocked and just said why, what an earth has happened?

“That feeling when I could just say ‘I have won the National Lottery’ is a moment I will never forget.

“Never did I believe I would ever get to say this. You always dream about it – but it just doesn’t happen to people like Sandra and I – well now we are proof it does.”

A the top of the couple’s shopping list is an operation for labrador/Staffordshire bull terrier cross Meg to have the bones of her leg fused together.

They also hope to buy a plot of land in the countryside to building their dream home on, a new Volvo for Sandra and a 75-inch tv.

The couple, who have five children and 10 grandchildren, also plan to help them get on to the property ladder as they are all currently renting.

“They’ll all get a treat and I’m going to get advice on how I can use it to make money.

“Something was just telling me to buy it.

“I went out of the shop and sat and scratched it – I just could not believe what I was seeing. I let out a scream and immediately drove home.

“As I went into the house I was shouting to my wife, Sandra, to come down the stairs. She immediately thought something had happened to the dog.

“She just thought it was all a joke – but then she looked at the card and almost fainted. Sandra just went white.

“To think I almost didn’t go into the shop on that morning because of the roadworks.

“I really was so close to just driving past.”

The scratch card Ian bought was The Monopoly Deluxe, which operators say has a 1 in 3.38 overall chance of winning a prize. Prizes range from £5 up to the top prize of £2m.

Ian added: “It is all just so overwhelming and I actually think the news is still sinking in.

“Sandra and I now cannot wait to really live the dream and make the absolute most of our retirement! What a magical moment this is in our lives!”

The source of the itch sensation has been discovered by scientists