It’s official, Brighton is the happiness capital of the UK. The popular coastal city beat competition from Leicester and Portsmouth to take the top spot. Oxford, Norwich and Bristol also appeared in the top ten happiest cities to live in, while Manchester, Belfast and Cardiff all took high positions. More than a third of Brighton’s […]

It’s official, Brighton is the happiness capital of the UK.

The popular coastal city beat competition from Leicester and Portsmouth to take the top spot.

Oxford, Norwich and Bristol also appeared in the top ten happiest cities to live in, while Manchester, Belfast and Cardiff all took high positions.

More than a third of Brighton’s population chose the word ‘happy’ to describe their lives.

But at the other end of the scale, just 16 per cent of Edinburgh residents described their lives as ‘happy’, instead favouring the word ‘anxious’.

“Maybe it’s the sea air and sunny weather that keeps them smiling.”

The study asked 3,000 Brits to consider their general life satisfaction and rate how they feel on a scale of one to ten.

When asked to rate their life satisfaction on a scale from one to ten the average Brit gave themselves a middling 6.37 out of ten. 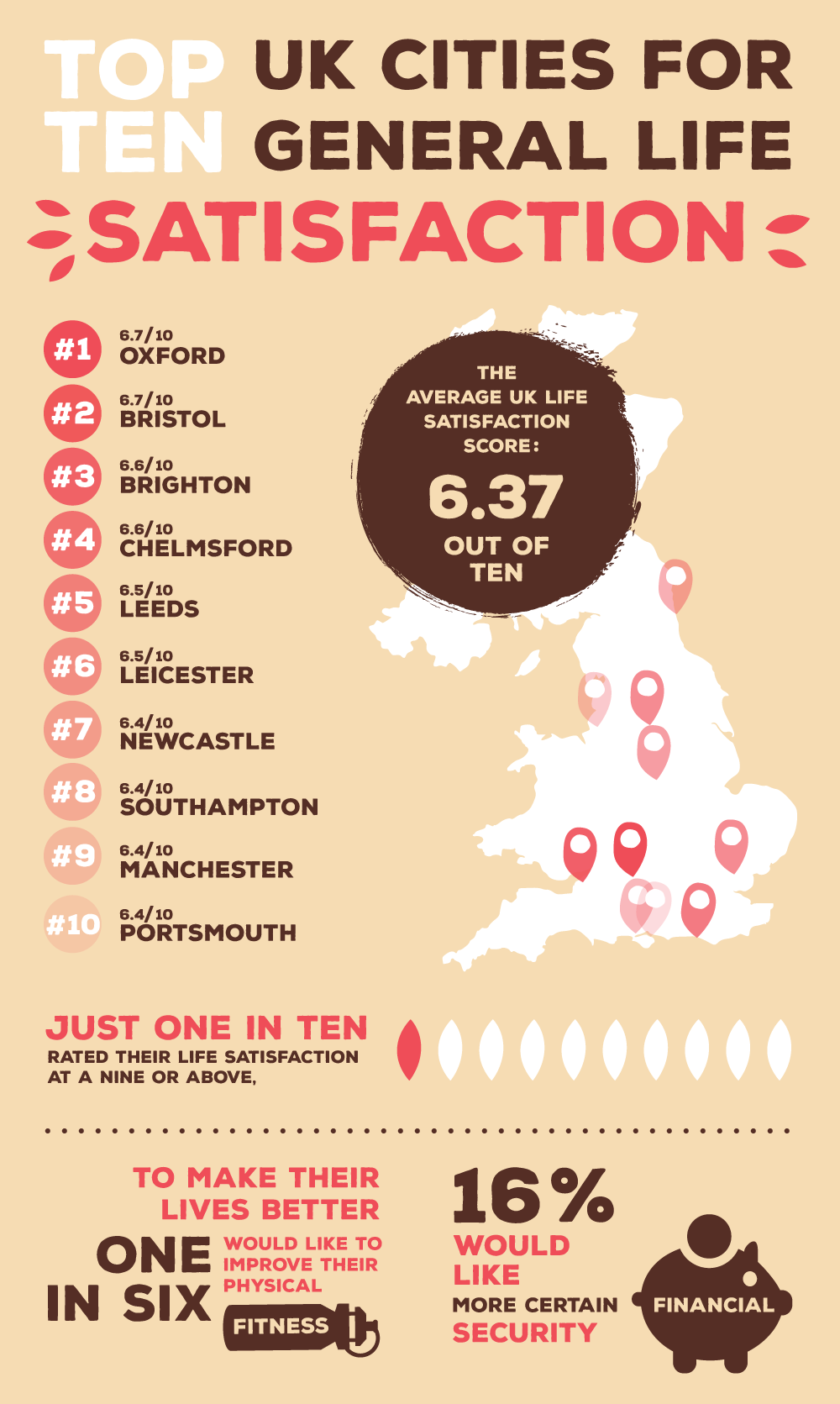 Researchers also looked into the ways we boost our mood and found three in five look to bed for comfort in hard times, and over half lean on family for support.

Forty three per cent play their favourite music when they need to raise their spirits with reading a book proving more popular for boosting our serotonin levels than sex.

Nearly half of the women polled in the study thought time to relax was important for their well-being, while 35 per cent of men preferred sex as a way to unwind.

But it’s the typical British weather which is most likely to get us feeling down in the dumps first place, with 40 per cent claiming inclement weather has a negative effect on their emotions.

Women are twice as likely as men to be brought down by living in a messy home, with 37 per cent claiming that untidiness has a negative effect on their mood compared to 18 per cent of men.

It also emerged the average Brit believes they will be at their happiest at the age of 33, with just over a third think their best years are now behind them.

But an optimistic fifth think they are currently having the time of their lives. 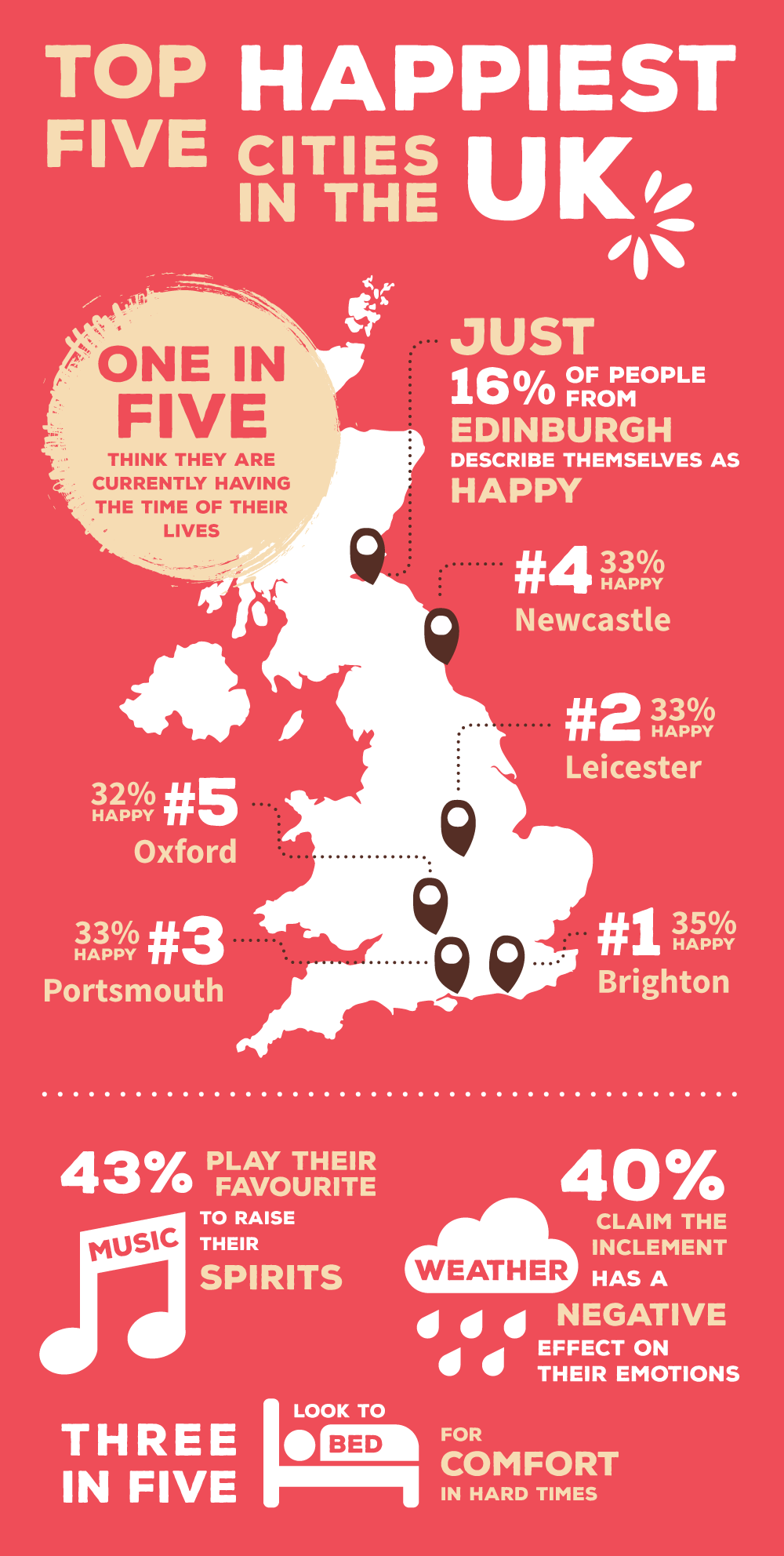 Fifty-eight per cent reckon they are usually happy people, and only six per cent said they rarely or never feel happiness.

A quarter of Brits describe themselves as anxious, and only one in seven consider themselves a generally confident person.

Worryingly, 44 per cent of those polled believe they have experienced a panic attack at one time or another in their lives, and three in five have suffered from anxiety.

In order to make their lives better, one in six would like to improve their physical fitness and 16 per cent would like to have more certain financial security.

Marketing Director, Kerry Collinge from 9NINE, added: “Happiness is at the heart of our brand. Our study has helped to show that when it comes to the secret of happiness the simple things in life are usually best.

“Forty winks, close friends and enough time with our favourite food and entertainment seem to keep a smile on the faces of most.”

THE HAPPIEST CITIES IN THE UK: