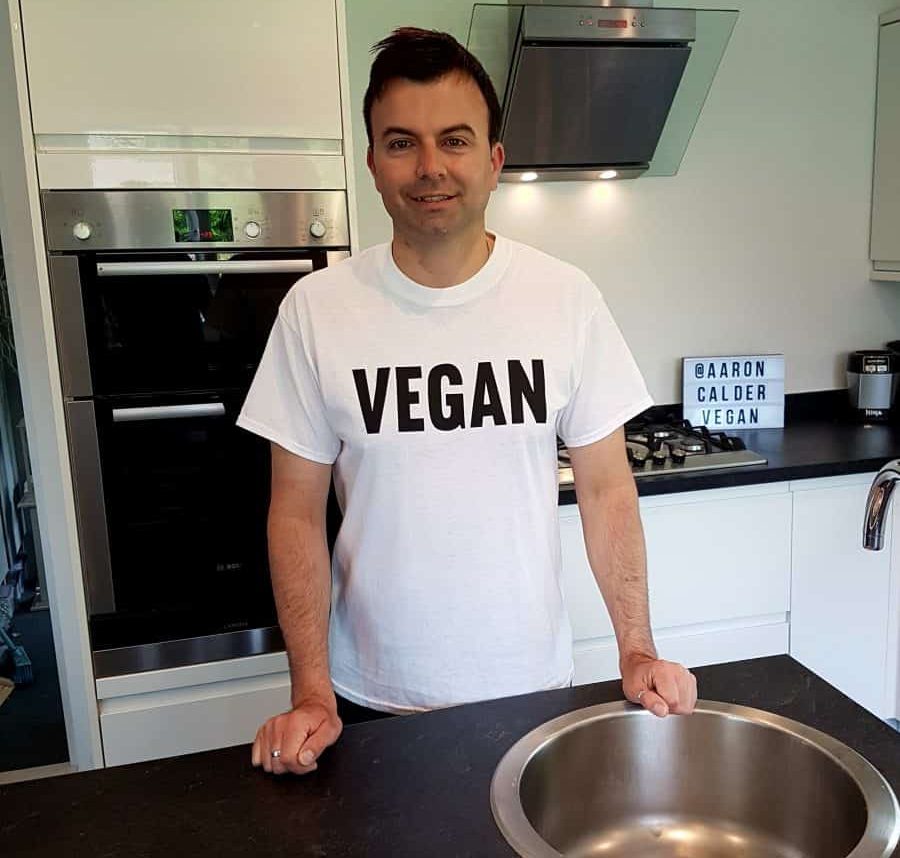 A former alcoholic who almost died from liver damage has turned his life around by going vegan.

His drinking had damaged his liver so badly that his veins became clogged up and burst in his mouth while he was sleeping.

Aaron survived the ordeal and quit drinking immediately after doctors told hims another drop would kill him.

But two years after going sober tests showed Aaron’s liver was still in a terrible condition.

Aaron watched a Netflix diet documentary called ‘Fat, Sick and Nearly Dead’, and then switched to a vegan diet which led to miraculous improvements in his health.

Aaron, 40, said: “A fibroscan measuring the inflammation of my liver came in at 75 – the worst possible result.

“But just months after adopting the vegan diet, my score had dropped by almost a half to 39 and my liver appeared to be functioning normally. I couldn’t believe it, and neither could my doctor.”

Aaron started binge drinking as a teenager and became dependent on alcohol to help him unwind from work and to boost his confidence socially.

But seven years ago, aged 33, he was put in intensive care and kept in hospital for two weeks.

He had two blood transfusions and was treated for a kidney infection, malnutrition, gout and liver cirrhosis.

Aaron said: “My liver was so badly damaged that it couldn’t cope with the blood flow. The blood was blocking up which caused seven veins in my throat to burst.”

He added: “The doctors told me I was very lucky to be alive and said if I drank again I would die. But I have not touched it since my hospital admission – not a drop.”

Two years after Aaron gave up alcohol in 2013 his liver inflammation score was still the worst possible result.

The former supermarket worker began watching a Netflix documentary called ‘Fat, Sick and Nearly Dead’ chronicling the experiences of an overweight man who adopts a fruit and vegetable diet for 60 days to fix his health.

Aaron said: “I was sceptical at first. As a vegetarian, I was sure that I needed eggs for protein and milk for calcium.

“But I decided to give the vegan diet a go and started to see massive improvements in my health.”

Just months after adopting the plant-based diet and switching to wholemeal ingredients Aaron returned to hospital for another liver scan.

He said: “The results alone showed that my liver was functioning normally. My cholesterol and blood pressure were perfect too.”

But Aaron was surprised by how averse the doctor was to veganism, even after seeing its benefits first-hand.

Aaron added: “My doctor immediately saw how well I looked when I walked in. But he didn’t recommend a vegan diet because he thought it lacked vital nutrients. I couldn’t believe it, given my improvements since switching.”

He said: “People think a vegan diet is strict, but I actually eat a lot of food and still enjoy vegan burgers, chips and chocolate cakes. But I swap the butter, white flour and sugar for avocado oil, wholemeal flour and maple syrup.”

Aaron returned for further tests in March last year, and for the first time, the fat deposits in his liver had completely cleared.

He said: “The vegan diet has played a massive role in my recovery. It has given the body the chance to heal. When I stopped drinking, my liver didn’t improve much. It wasn’t until I adopted the vegan diet that my results started to improve.

“I am now enjoying my work as a food blogger. I have swapped my alcohol addiction with a focus on making really good food.”