An ‘exercise pill’ that boosts blood flow by mimicking the effects of going to the gym could revolutionise the lives of heart failure patients. The experimental drug strengthened the hearts of mice and rats with the condition – and scientists are hopeful the same will happen for humans. It’s based on a protein called CT1( […] 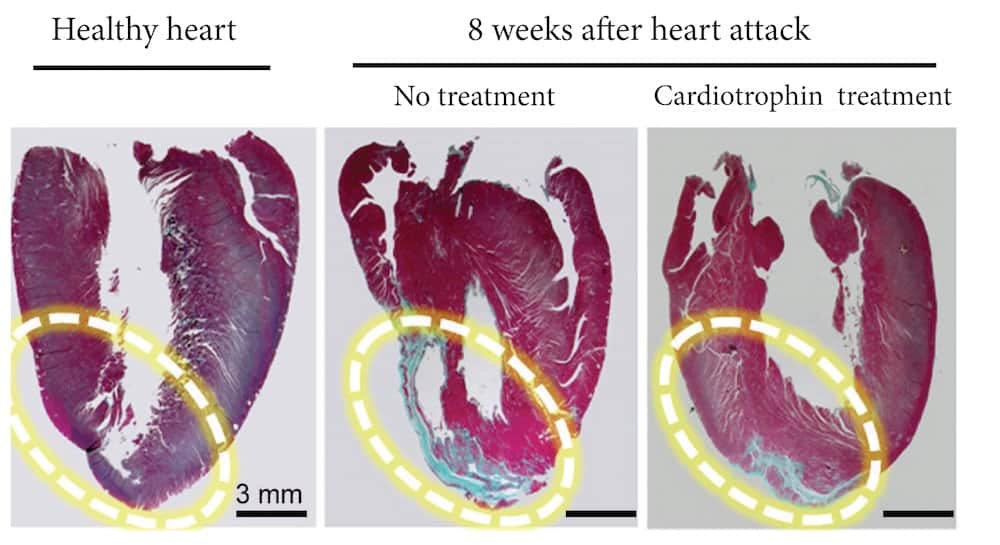 An ‘exercise pill’ that boosts blood flow by mimicking the effects of going to the gym could revolutionise the lives of heart failure patients.

The experimental drug strengthened the hearts of mice and rats with the condition – and scientists are hopeful the same will happen for humans.

It’s based on a protein called CT1( cardiotrophin 1) that tricks the heart into thinking it’s being exercised by growing healthily and pumping more blood.

This is just what happens during a work-out, jog or cycle ride.

And it’s very different from the harmful enlargement of the heart that occurs during heart failure.

Senior author Professor Lynn Megeney, of Ottawa University, said: “When part of the heart dies the remaining muscles try to adapt by getting bigger.

“But this happens in a dysfunctional way and it doesn’t actually help the heart pump more blood.

“We found CT1 causes heart muscles to grow in a more healthy way and it also stimulates blood vessel growth in the heart.

“This actually increases the heart’s ability to pump blood – just like what you would see with exercise and pregnancy.”

Heart failure is believed to affect around 900,000 Britons – almost half of them undiagnosed – for whom any physical activity is exhausting.

It’s caused by the organ being unable to pump blood properly around the body – often after a heart attack.

A drug that can reduce the death rate from the condition – for which there is no cure – will have a significant impact on the life expectancy of millions round the world.

It would also reduce the need for heart transplants for which there are long waiting lists because of a lack of donors.

Nearly 40 per cent of patients die within a year of developing heart failure – a survival rate worse than many cancers.

Dr Megeney’s team compared the effects with a decongestant called phenylephrine (PE) – prescribed for blocked noses which can cause the bad kind of heart growth.

This just caused the heart muscle cells to grow wider – and there were no positive effects.

When CT-1 treatment stopped the heart went back to its original condition – just like it does when exercise or pregnancy end. But the dysfunctional heart growth caused by PE is irreversible.

Prof Megeney said CT-1 dramatically improved heart function in mice and rats with different types of heart failure – one caused by a heart attack affecting the left side of the organ and the other by high blood pressure in the lungs which harms the right.

The research published in Nature said both CT-1 and PE stimulate heart muscle growth through a molecular pathway that has traditionally been associated with promoting cell suicide. But CT-1 has a better ability to control this process.

Co-senior author Prof Duncan Stewart, a cardiologist at The Ottawa Hospital, said: “This experimental therapy is very exciting – particularly because it shows promise in treating both left and right heart failure.

Dr Patrick Burgon, of the University of Ottawa Heart Institute, said: “An intriguing aspect of this research was how human CT1 was able to promote a healthy growth response in multiple animal models.

“This suggests the action of CT1 is universally conserved and puts us much closer to therapy.”

The researchers also note exercise could theoretically have the same benefits as CT-1 – amnd people with heart failure are usually limited in their ability to exercise.

Prof Megeney and Prof Stewart have patents pending for the use of CT-1 to treat heart conditions and they hope to develop partnerships to test this protein in patients.

It could help millions around the world living with a condition whereby their heart has been severely weakened, for which there is currently no cure.

If the testing is successful it will take a number of years for the treatment to become widely available.

Professor Metin Avkiran, associate medical director at the British Heart Foundation, said: “Over half a million people in the UK are living with heart failure.

“There is no cure for this debilitating condition, and for patients with severe heart failure the chances of surviving for more than five years are worse than most forms of cancer, so the need to find new treatments is urgent.

“That’s why the BHF is funding millions of pounds of research into its causes, prevention, diagnosis and treatment.

“This is an encouraging discovery, suggesting that the CT1 protein could help improve the function of a failing heart.

“However much more research is needed to find out if CT1 is safe and effective in humans with or at risk of developing heart failure.”