by Jasmine Stephens
in Lifestyle, Parenting

New research has found dads stop hugging their children by the time they turn 10 years-old.

Believing their child was ‘too old’ for cuddles is the most common reason for no longer showing them affection, followed by it making their children feel uncomfortable and that they had drifted apart. Others who took part in the poll, by Fairy Non-bio, admitted their children even asked for the cuddles to stop.

Dr Simon Thompson, Psychologist and Neuroscientist, said: “We are familiar and aware of the change that puberty and teenage years can have on our children, and these can frequently impact on our relationship with them.

“In particular, it is a part of growing up that makes us all more independent, that often means a clear demonstration of us standing on our own feet, and thus showing less tactile affection. However, the closeness and softness of the hug maintains a strong connection and bond between parents and children. It is perceived as safety and protection by the givers and the receivers.”

Telling them you love them, listening to them when they talk to you, giving them advice and guidance and doing things together completed the top five. Other ways to show affection include kissing them, being present for important events and simply sitting down to read a book together.

It also revealed dads are most like to hug their children when they are upset, while 48 per cent said they give them a cuddle every time they see them. When they return from a long trip, if they haven’t seen each other for a long time and before they go away are also occasions likely to warrant a father-child hug.

But despite one in 10 dads admitting they no long cuddle their children, two thirds still claim to give their son or daughter more hugs than their own father did with them.

Dr Simon Thompson added: “Hugs impact on us in a variety of ways. At the physical level, they provide us with tactile comfort, softness, and closeness.

“For example, serotonin is released to control our mood (something that is irregular in those suffering from depression); cortisol is released to combat the effects of stress; and adrenaline is released to help us move from danger or to increase our feelings of excitement and happy anticipation. The hug is likely to cause us to elicit these chemicals so that we feel emotionally and physically protected and reassured by the protector (hugger).”

Fairy Non Bio want to encourage soft and close relationships, so they created a video of real life father Stephen and his grown up son Ben to remind parents everywhere to #Neverstophugging video. The story reveals what fathers and their children go through, how their relationship shifts and how the affects their relationship.

Scott Popham, spokesperson from Fairy Non Bio commented on the campaign: “Rooted in our passion for huggably soft clothes, Fairy Non Bio believe in the Power of Soft, and champion the idea that we should never stop hugging our babies – no matter how old they are.

“Nothing beats the power of a hug, so perhaps we should stop the handshakes and occasional chats and go back to embrace the tactile moments that bring us together.” 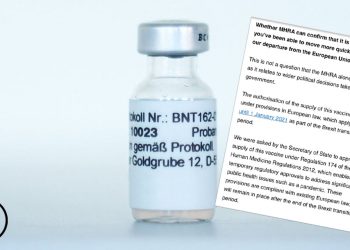