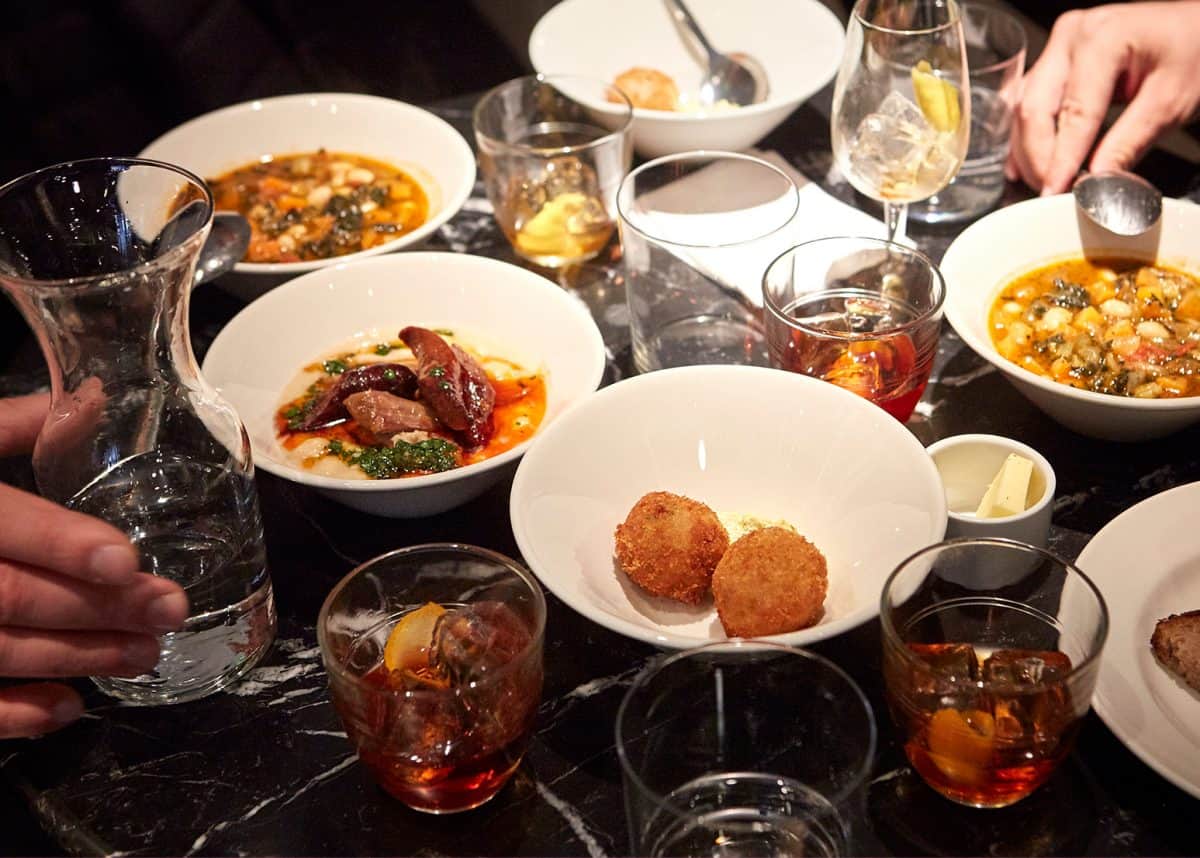 A new Heatherwick Studio-designed shopping and restaurant district near King’s Cross station, Coal Drops Yard opened towards the end of 2018 with its first wave of restaurants and trendy retail stores. Originally established in 1850, to handle to eight million tonnes of coal delivered to the capital each year, Coal Drops Yard’s most recent redevelopment sees a parade of Victorian buildings and arches reimagined to home various enterprises. Located in canal-side arches fronting on to cobbled courtyards within the original ‘coal drops’ themselves, restaurants and bars include the likes of London’s fourth Barrafina, Parrillan, Coal Office, hicce, Casa Pastor, Plaza Pastor, and The Drop.

One of the development’s first restaurants to open, Vermuteria is an all-day café and bar from Anthony Demetre, the chef behind Wild Honey, and designer Michael Sodeau. Inspired by the bodegas and cafes along the cycling Grand Tour routes of Italy, France and Spain, Vermuteria combines the pair’s love of food, drink and cycling. Cycling posters and bicycles adorn the walls, alongside countless vintage bottles. While the food menu focuses on what’s described as British dishes with European twists, over 70 vermouths are served, including a selection available on tap.

Best enjoyed on their own, with a simple garnish and single ice cube, or in classic cocktails, the vermouth list features 50ml serves priced from £4, championing producers based in Italy, France and Spain, plus Greece and Britain. Vermuteria’s on-tap vermouths produced in collaboration with Asterley Bros. The rosso is sweet and refreshing with notes of citrus zest, rhubarb and rosemary, while the dry variant is complex with marjoram, jasmine, chamomile, lemon peel and prominent wormwood.

Since re-opening, following almost four months of closure due to the effects of the coronavirus outbreak, Vermuteria is taking reservations, with all seats on its courtyard terrace, some of which are strategically covered. Heaters have also been implemented where necessary, many staff members wear face coverings, tables are well-spaced, and orders are taken at a makeshift outdoor bar with the food menu written on a large chalkboard. Throughout August, the restaurant is also taking part in the government’s Eat Out To Help Out scheme.

On a recent visit to Vermuteria, dinner began with a round of sourdough and butter, plus a simple plate of high quality Bay of Biscay anchovies bathing in a pool of golden olive oil. A dish of Heritage tomatoes plays it safe, showcasing the key ingredient, ubiquitous on summer menus in British restaurants, simply joined by some slivers of red onion, basil fronds and a drizzle of olive oil. On the other hand, a black pudding dish features relatively soft black pudding that’s well cooked and served on a slice of toasted sourdough, crowned with a fried egg and a suggestion of salsa verde. Best of all, a whole poussin is marinated with lemon, thyme and honey, halved and finished on the barbecue, served over a melange of slow-cooked celery, carrot and beans. A masterclass in both French technique and Italian minimalism, letting the core ingredients sparkle.

The food served at Vermuteria isn’t necessarily revolutionary but is more than competent, while the vermouth list demands to be sampled and the terrace completes the experience evocative of summer holidays. Something we could all do with at the moment.

RELATED:These are the best restaurants for al fresco dining in London