The venison puffs at Hakkasan are a thing of beauty: mouthfuls of unequivocal brilliance. Insalubriously buttery, the pastry parcels (made with lard) are brushed with honey, smattered with a torrent of sesame seeds. Inside, hunks of venison have inherently rich flavour naturally remarkable with the honey and sesame, rampant with Chinese five spice. The filling […]

The venison puffs at Hakkasan are a thing of beauty: mouthfuls of unequivocal brilliance. Insalubriously buttery, the pastry parcels (made with lard) are brushed with honey, smattered with a torrent of sesame seeds. Inside, hunks of venison have inherently rich flavour naturally remarkable with the honey and sesame, rampant with Chinese five spice. The filling is coated with a thick sauce that’s sweet, savoury, umami, delicious. Each bite is transcendent: an explosion of expertly amalgamated flavours.

“The venison puff is very popular,” our waitress explains. “People come in the evening and find themselves disappointed it’s only available at lunch. Most of the specialist dim sum chefs have gone home by dinner time.”

With midweek lunches occasionally proving difficult, it’s a relief that Hakkasan Hanway Place has introduced a ‘Dim Sum Sundays’ menu, available each week until six o’clock. Upscale Chinese restaurants have become commonplace in London, but when Alan Yau launched the original Hakkasan in 2001, the concept was revolutionary – awarded a Michelin star in 2003. Since then, the restaurant has become widely renowned; occasionally dubbed “the Nobu of Chinese food”. The restaurant group now operates 11 restaurants worldwide, with outposts including San Francisco, Mumbai, New York, Miami, Abu Dhabi, Shanghai, Dubai and Doha. A natural progression, Hakkasan opened a nightclub in Las Vegas during 2013, followed by plans to open a chain of clubs in Mexico, in the near future. 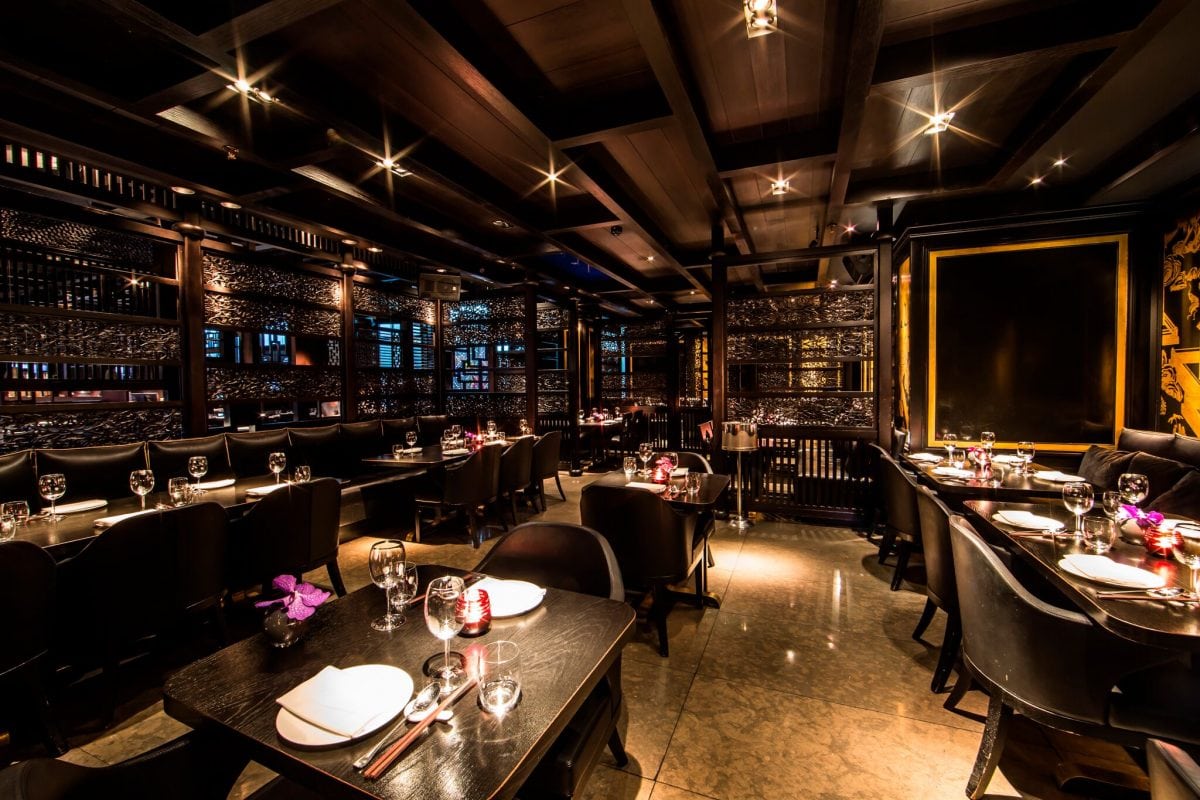 Tucked back from Oxford Street, Hakkasan Hanway Place is unassuming from street level, positioned in a constricted alleyway. Entering the basement space, we’re greeted by blue mood lighting, a powerful aroma of jasmine and waitresses clad in lurid body-con dresses. An expensive exercise in Orientalism, the multimillion-pound interiors were designed by French designer Christian Liaigre, festooning the low-lit space with various intricately carved dark wood screens, partitioning the room capacious enough to accommodate more than 200 covers. According to the Michelin Guide, the room has “sensual looks, air of exclusivity and glamorous atmosphere – characteristics now synonymous with the brand”: but – in reality – it’s not so pretentious. Although the restaurant has a famous clubby ambience during weekend evenings, Sundays are comfortable. A resident DJ is, of course, on hand, but the music played during lunch is serviceable, instrumental and unobtrusive.

Designed by Chef Goh Wee Boon, the Dim Sum Sundays menu is also sensibly priced at £62 per person, including two cocktails and a bottle of Louis Roederer Brut Premier NV Champagne for two to share. A steal considering the a la carte menu features Peking duck with Beluga caviar for an eye-watering £320. Prawn toast is stuffed with foie gras and costs £22, while steamed har gau (£25) is served with edible – tasteless – gold leaf. The Dim Sum Sundays menu, however, is not a prime example of style over substance. Lunch begins with a salad of crispy duck, dressed at the table. With a slightly sweet glaze, the duck’s portion size is generous, accompanied by segments of sharp pomelo, pine nuts and shallots. 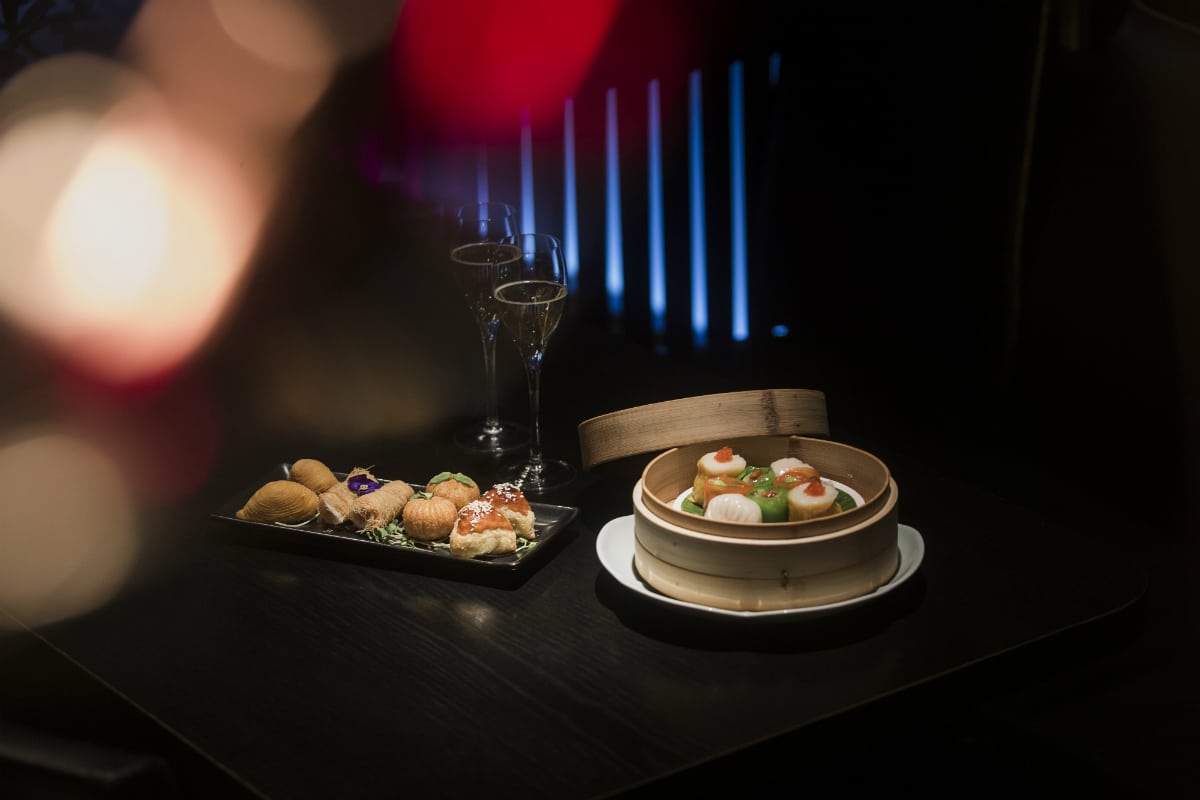 To follow, dim sum is clearly the main draw on Sunday. A platter of steamed dumplings features prettily presented parcels. Scallop siu mai is crowned with flying fish roe but lacks the unctuousness of pork; prawn har gau are fine, as are the Chinese chive and prawn dumplings – although capped with so much slimy, flavourless matter. The selection of fried and baked dumplings is far superior, featuring those venison puffs; sweet-savoury pumpkin-shaped pumpkin and duck puffs garnished with borage cress; and a small pasty of spicy mooli and fragrant crab meat, soled with sesame seeds: delicious. The only miss is the shellfish and cheese combination that’s wrapped in thin rice noodles and deep-fried. Here, the flavour of cheese and oil completely overpower the seafood.

A selection of main courses follows, including a stir fry of tender rib eye steak ribbons lashed with sauce that’s rife with garlic, black pepper and merlot which soaks into the convoying egg fried rice. Another stir fried dish harbours clean-tasting sugar snap peas, water chestnut and earthy cloud ear fungus. To finish, Hakkasan’s Jivara bomb is a decadent symphony of ice cream cloaked with Rice Krispies, hazelnut praline and a cascade of melted milk chocolate. A trio of macarons is a lighter alternative. Although soft, the macarons have pleasant flavour – most impressive of which is the pistachio.