A quintessentially British restaurant with a prominent focus on refined pies.

Though British food is experiencing a renaissance of sorts, across some of London’s best restaurants – our quad-national cuisine is still so often tarnished (unfairly) with an agonisingly dire global reputation.

On the ground floor of the Rosewood Hotel, Holborn Dining Room is a somewhat hidden gem. The post code is resolutely central, though it’s off the beaten track in comparison to other Covent Garden restaurants, many of which are immoral tourist traps. For as long as I shall live, I refuse to call the area surrounding Holborn and its scabby thoroughfare by its preferred ‘Mid-town’. At Holborn Dining Room, Chef Calum Franklin’s menu is faithfully British with plenty of polished classics, plus a prominent focus on ‘craft’ pies. Yes, the supplementary ‘C’ word makes me feel physically sick – but the opulent pies served are actually quite outstanding.

According to the restaurant’s website, the space is a ‘vibrantly bustling dining salon’, less ceremonially stiff than typical hotel restaurant settings. Here, the high-ceilinged room is bedecked with blood red blanquettes, copper toned bars and friendly waiters that wear the most laughably absurd trousers on this side of Hackney. Alongside the food menu, the bar is renowned for housing London’s biggest gin collection, with 500 options joined by 30 differing tonics. The bar also serves seven different takes on a classic Negroni. The drinks list reads like an absolute dream. It’s so exciting, in fact, it almost makes me wish I’d brought a spare pair of clean trousers. 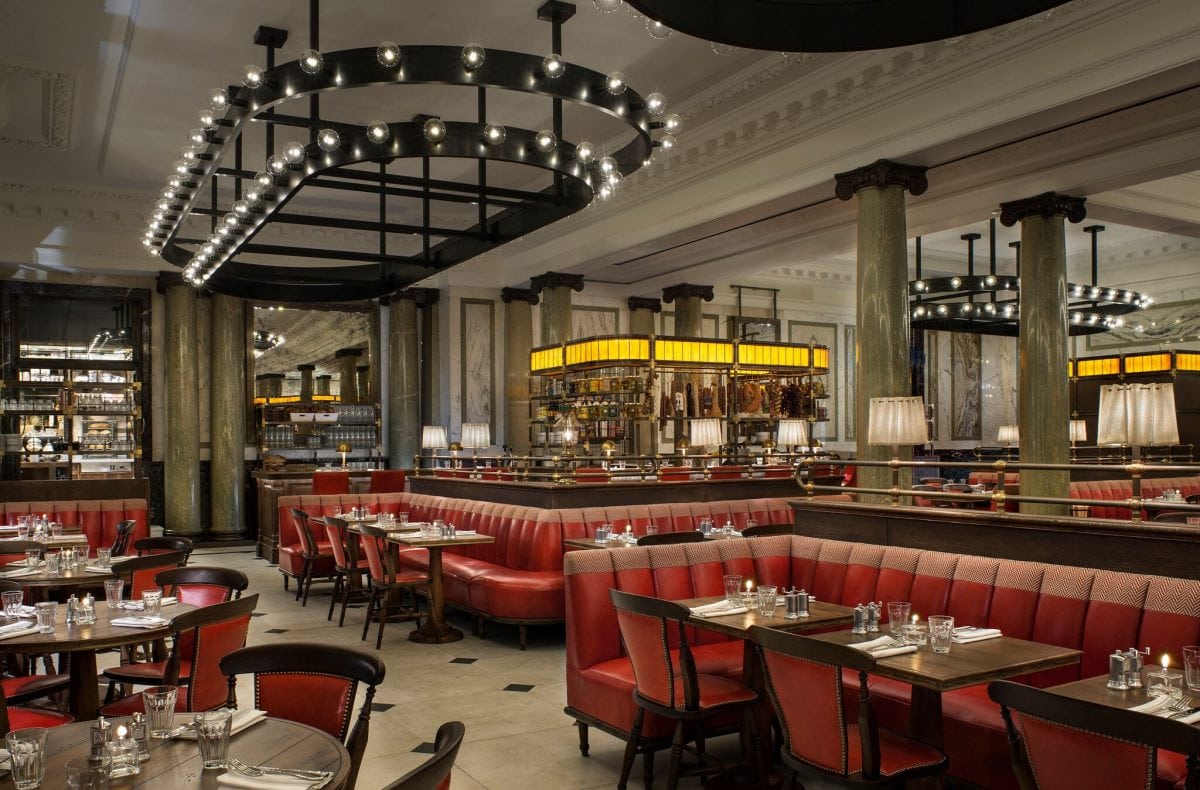 To commence, a dozen Jersey oysters are served nobly over ice on a raised platter as sizeable as the entire table top. Regrettably, they’re shucked with abandon and demand to be eaten in a less slushily romantic fashion than the occasion suggests. Clinging to the shell like limpets, these plump yonic molluscs demand to be torn with our teeth, like Neanderthals chomping through new-borns’ umbilical chords. Far better is the restaurant’s famous Scotch egg. A tennis ball-sized sphere ensnares a perfect ratio of well-seasoned sausage meat, plus a rich, runny yolk that acts as a delectable sauce.

Against all odds, the initial cooking of the octopus served with chorizo is fine. It’s neither onerously springy, nor sappy and appropriate for the most edentulous. Alas, the excessive heat of the searing pan lends a charred crust with acrid bitterness that’s only heightened by the escorting trickle of aioli. Next, rolled roast Suffolk pork belly is cooked slowly and harbours some delicious flesh, though the crackling is miserably durable and near impossible to chew. With so many forks lining the table, the required hammer and chisel are forlornly absent. The sage jus to accompany the pork, on the other hand, is richer than Dan Bilzerian and equally unpleasant.

A celebration of seasonality and refined British comfort food, the grouse pithivier is fittingly glorious. In England, we take pies very seriously – some more ridiculously so than others. This is not one of the traditional frugal staples of iconic pie and mash shops such as Manze and Arments; or the pies so fêted north of Watford Gap, thus mustn’t be likened to such. It is, however, a combination of impressive pastry skills, baking expertise and understanding of flavours. Stunningly presented, the pithivier vaunts intricately decorated golden pastry, while the grouse’s breasts, cooked perfectly pink, are cushioned by heaps of mousse made with the bird’s heart, liver, kidneys and confit leg meat, flecked with complementarily earthy girolle mushrooms. This is all wrapped in spinach that works as a bolster to absorb cooking juices, preventing the crisp puff pastry from becoming unpleasantly soggy. Simply – Holborn Dining Room’s grouse pithivier is sensational.

Desserts are typically British and comforting, though not particularly memorable. While the food served during this visit isn’t necessarily an endless hit parade, the pie is remarkable. Elsewhere, the menu also boasts a curried mutton pie with mango chutney (far superior to the curry pies served at lower league football matches, I’m sure), plus a seldom seen Beef Wellington available as a regular Wednesday special. Moreover, the service is helpful and refreshingly charming, while dinner on a Friday night provides an immeasurable sense of occasion, unlike so many of the city’s hotel restaurants.