By Carly Bryant We had already left it too late to eat, blood sugar levels were low and tensions were running high. Ill-advisedly we took the decision to walk the twenty minutes down the famous ‘Rye’ pub a site which just a few years ago would have been sneered at by London’s well-heeled, which is […] 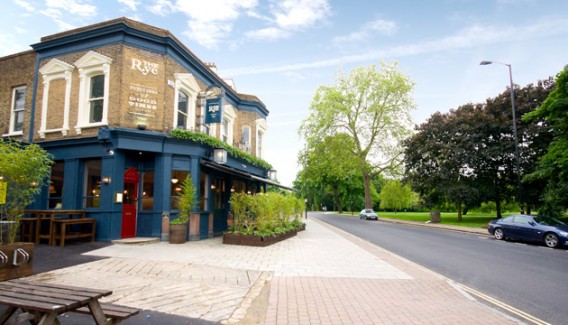 We had already left it too late to eat, blood sugar levels were low and tensions were running high. Ill-advisedly we took the decision to walk the twenty minutes down the famous ‘Rye’ pub a site which just a few years ago would have been sneered at by London’s well-heeled, which is now one-in one-out on a Sunday lunch among the East Dulwich/Nunhead/Peckham set.

With its large garden – complete with miniature (that’s the operative word) boule’s pitch, table tennis and copious amounts of outdoor seating, as well as a luxuriously decked out inside bar, the Rye appears to have it all.

All it would seem, except for any food. Admittedly we were warned when ordering (at the bar – do ensure you know your table number or you will be sent back to retrieve it) that there would be a wait of up to 40 minutes.

Consoled with a bottle of Prosecco a wait didn’t seem like too bad an option, so we settled in at our garden table (number 261 – a good spot) and tucked into the Prosecco (£28 Per bottle, standard), as the hour passed and we saw table after table served food and continued to be ignored by the waiting staff our resolve was beginning to drain, a bubbles buzz on an empty stomach turned quickly into gnawing hunger, sniping at each other and increasingly…silence.

After nearly an hour when our food eventually did arrive, we had a rather unfortunate incident with the salt (which was it is only fair to say no fault of the Rye and every fault of ours) and suffice it to say half of one of our roasts proved inedible.

The roast we did eat was mediocre, not awful, but not entirely worth the wait and with fewer vegetables than desired, it did come with a delicious rich gravy though the whole thing was rather salty and that was before SALT-GATE.

All in all, it was a mediocre Sunday lunch, I would put the blame about 50 % in our camp and 50% at the feet of the Rye.

Another point I feel I should mention, we have visited the pub on a number of occasions and the bar staff are, well, to put it mildly rude. Maybe over worked or perhaps simply stroppy, we can’t decide, but either way don’t expect to be made to feel at home. Retreat from the bar to your seat as quickly as possible.

Having said of all that, I will cock a ‘rye’ Grin and happily return to this popular gastro pub for many more occasions, with its strong Cornish Lager, two speciality Ciders on tap, the football on TV and a family friendly crowd you could do a lot worse.