Since launching in 2002, Zuma has become renowned as one of London’s (if not the world’s) best loved contemporary Japanese restaurants. Introducing the Japanese robata grill to Europe, Zuma’s original site occupies an isolated Knightsbridge side street, launched by chef/restaurateur Rainer Becker and business partner Arjun Waney. Born in in the Mosel Valley, Becker began […]

Since launching in 2002, Zuma has become renowned as one of London’s (if not the world’s) best loved contemporary Japanese restaurants.

Introducing the Japanese robata grill to Europe, Zuma’s original site occupies an isolated Knightsbridge side street, launched by chef/restaurateur Rainer Becker and business partner Arjun Waney. Born in in the Mosel Valley, Becker began his chef career working in some of Germany’s top restaurants, including Michelin-starred Koenigshof in Munich and Goethehaus in Bensburg, before embarking on a 14-year stint with the Hyatt Hotel Group. After becoming chef de cuisine at the Hyatt Regency in Cologne, the chef eventually took the position of executive chef at Park Hyatt Sydney before moving to Tokyo to carry out the same role. Here, Becker’s palpable love of Japanese cuisine was ascertained. Although he’d already visited the city for a German food promotion in 1989, Becker completely immersed himself in Japanese culture and cuisine upon moving to Tokyo five years later.

Back in London, the chef worked on the launch of the Rib Room at the Hyatt Carlton Tower, as well as undertaking a consultancy role on the launch of Alan Yau’s now world-famous Hakkasan. While Hakkasan remains a distinctly Chinese restaurant, the venue’s model would heavily influence Zuma – Becker’s first restaurant. Like Hakkasan, Zuma quickly became a proverbial magnet for celebrities, serving modern food in a high-octane, clubby atmosphere. Following the success of the Knightsbridge restaurant, Zuma has become a successful international brand with 13 restaurants (at the time of writing) in cities as far flung as New York, Rome, Hong Kong, Miami and Bangkok. Rainer Becker’s second restaurant opening soon followed in 2004, with the launch of Roka in Charlotte Street: another contemporary Japanese restaurant with high roll-out potential. Oblix – an American-inspired fine dining restaurant – then noisily opened in 2013, occupying the 32nd floor of The Shard. 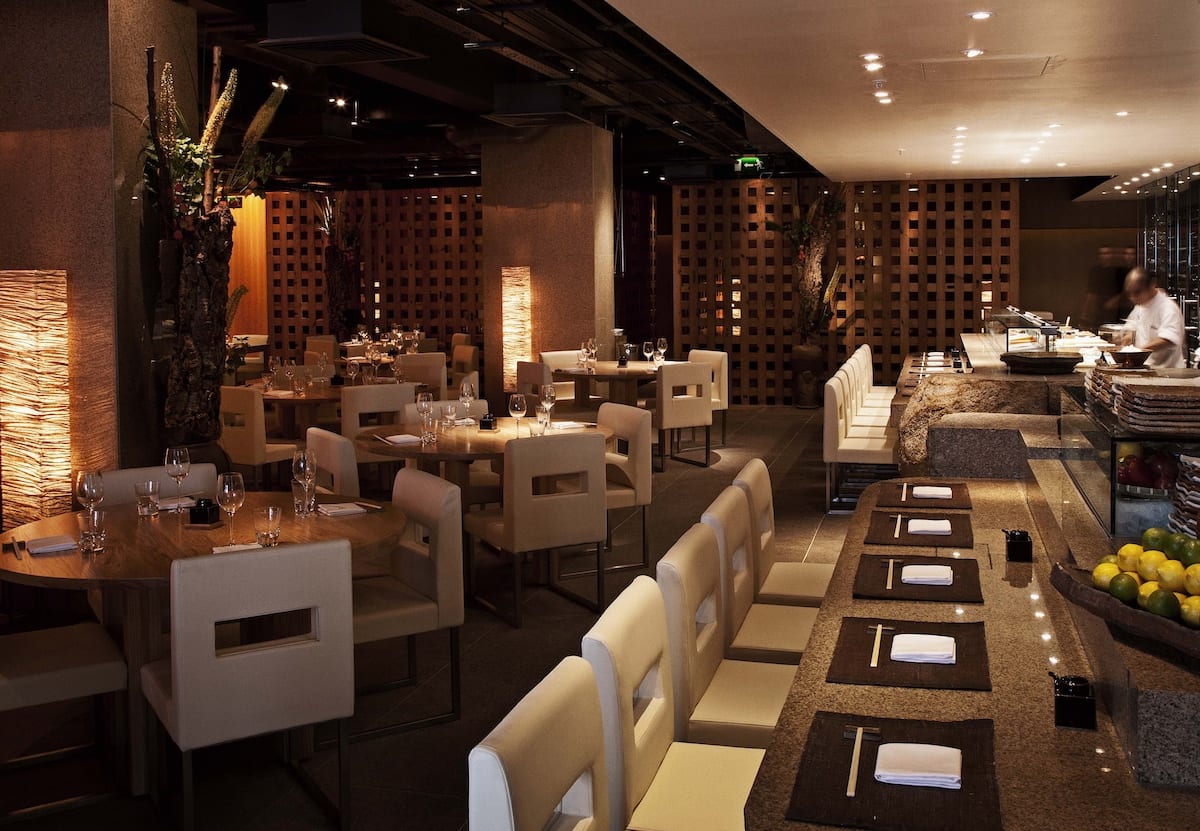 Designed with the four elements in mind (Earth, Fire, Water and Air), the dining room at the original Zuma – still London’s only outpost, somewhat surprisingly – was overseen by Japanese design company Super Potato. Though unremarkable from outside, the space is vast, with the interior comparatively minimalist when set aside Central London’s other it restaurants. Festooned with unclothed tables, calming water features and antique pine re-cycled from Japanese houses, the room is attractive – dimly lit and modern, even 16 years after opening. Alongside the melange of tables, Zuma has an impressive sushi bar and robata grill as an aesthetic feature, plus a glass-walled kitchen, cocktail bar and numerous private dining rooms. Lunch at Zuma is unusually free from pulsating, intrusive dance music and absolutely heaving with customers, regardless of Knightsbridge having lost much of its charm in recent years.

Lunch began with tempura shrimp (£16.20), a recent addition to the menu. Cloaked with delicate batter and deftly fried, the prawns were accompanied by a tub of mayonnaise embellished with a whack of citrus to slice through the residual oiliness of the fryer. With generally formal service, various dishes began to quickly arrive at the table as a parade of attractively presented, simple creations using premium ingredients. A pyramid of assorted tempura vegetables (£8.80) was fine, albeit perfunctory, while more inventive plates such as lightly-spiced soft shell crab (£12.90) – dredged in craggy batter and fried, convoyed by wasabi mayonnaise; or paper thin slivers of sea bass (£13.50) fanned across the plate and dressed with yuzu segments, truffle oil (surprisingly edible) and salmon roe were far more palatably rousing.

Numerous sushi and sashimi offerings are available, generally restrained in contrast to the contemporary dishes, respectful of tradition. Maki rolls are well prepared and feature ingredient combinations from classic tuna and spring onion through to unorthodox avocado alongside fresh water eel. Highlights from a platter of sashimi included thick dominoes of fatty otoro tuna (£15.20), oily mackerel (£5.40) and sea urchin (£18) served in sake glasses, capped with caviar and thin slices of spring onion. The sashimi at Zuma is generally of an exceptional standard, though supplementary substantial dishes from the robata are also necessary to avoid the need for a defibrillator to follow the bill in place of a credit card machine.

Tiger prawn meat (£23) was quickly cooked on the robata, cut into hunks then presented in a jumbo prawn shell, enlivened with fierce yuzu pepper. Zuma’s black cod (£39), on the other hand, was one of the better examples of the dish currently available in London: flaky and crusted with sweetness and profound umami savors, wrapped in hoba leaf. Lunch’s only meat dish, two lamb chops were cooked superlatively (£14.80), heavily spiced and showered with toasted sesame seeds. While various Japanese standard desserts are available, the meal concluded with the intention of prolonging the taste of those lamb chops for as long as possible. Although a lavish, often eye-wateringly expensive affair – Zuma impresses as a rare establishment which holds the key to sating both Knightsbridge fashionistas and devout gourmands.