Generally speaking, I’ve never been a great fan of tasting menus. It’s less of a problem with the sheer quantity of courses served, than it is with the chef’s decision to commonly present an array of gratuitously pretentious dishes. All too often this leads to spending three hours (or more) sycophantically congratulating the kitchen staff […] 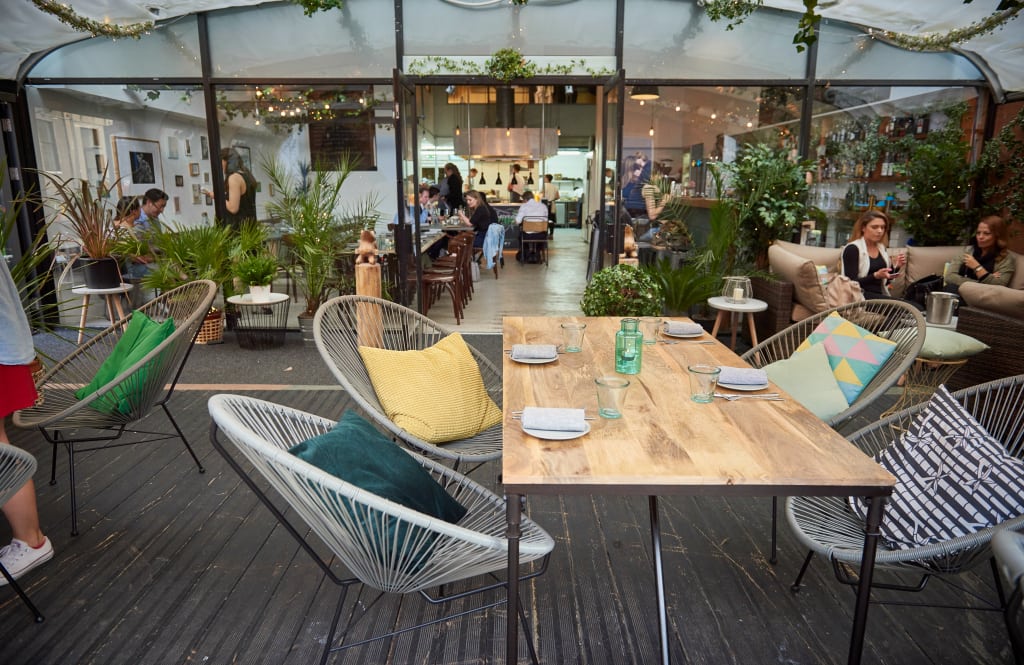 Generally speaking, I’ve never been a great fan of tasting menus. It’s less of a problem with the sheer quantity of courses served, than it is with the chef’s decision to commonly present an array of gratuitously pretentious dishes. All too often this leads to spending three hours (or more) sycophantically congratulating the kitchen staff and pretending to enjoy outrageous flavour combinations like white chocolate and raw sturgeon or foie gras and marshmallow. Combinations that have never worked, and surely never will, no matter how much science is forced into the cooking process. Nonetheless, if a restaurant’s tasting menu is priced similarly to that of eating a la carte, as is the case at The Frog in Shoreditch (£45 per head), a choice between the two seems wildly unnecessary, especially when the likes of cheese doughnuts are available as a supplementary cheese course.

After securing a place as a finalist in the 2013 series of MasterChef: The Professionals, Adam Handling soon opened “Restaurant Adam Handling at Caxton” within St Ermin’s Hotel, before being named Scottish Chef of the Year in 2015. Earlier this year, however, the chef leapt into opening his first solo venture proper – The Frog – situated within a space just off of Brick Lane that looks distinctly pop-up from outside. Set into two parts, the inside space has a muted and unpretentious décor, with an industrial style that allows the cooking to take the restaurant’s main focus. There is also a complete lack of white tablecloths, which is no bad omen. At the front of the building, a semi al fresco area is also on hand, furnished with various foliage, a graffiti-style mural that adorns the restaurant logo, and some chairs that look extremely comfortable. Alas, during our visit, on the hottest day of the year, all of the outside space had been reserved and we had no choice but to sit inside.

Unsurprisingly, we opted for the tasting menu, choosing the beer pairings (£25 per person), most of which were from BrewDog, instead the selections from the concise wine list. To begin, a selection of snacks included some deliciously moreish nuggets of heavily smoked chorizo, and ‘beer, beef, egg’ which comprised a mound of chilli beef tartare served on a cracker that fell somewhere between a poppadum and a Japanese rice cracker. Bread with chicken butter also contributed to the menu’s ‘snacks’ section, but having heard such wonderful tales about the whipped chicken butter, I couldn’t help but feel disappointed upon tasting. Though the spongy sourdough was practically perfect, the butter offered notes of chicken so small they they would have gone unnoticed, had they not been promised by the menu and a legion of overzealous Instagram accounts.

Next, perhaps the most popular dish on the menu: ‘Beetroot, beetroot, and more beetroot’ offered two tubes of sugar that were piped with beetroot and yuzu gel, and beetroot panna cotta. These were then sprinkled with a lurid pink beetroot powder that looked as though it had been stolen from a travelling circus’ makeup department. Although an undeniably vast amount of care and skill had gone into crafting the dish, the final product was a little on the sweet side, especially given its placing as a starter. Also, it was gone within a matter of seconds, alas making all of the culinary effort seem sadly superfluous. A light, pretty dish of flaked white crab meat, followed, accompanied by earthy avocado and paper-thin slices of frozen green apple that coaxed the crab’s natural sweetness onto the palate. Although simple, the dish was brilliantly executed, offering an intricate balance that demonstrates the chef’s refined palate.

For the fish part of the main course, a small tranche of hake was cooked just on the right side of being overdone, accompanied by limestone potatoes – famed for their Plasticine-like texture –moulded to accommodate a puddle of green tarragon oil. This was joined by radishes and beurre blanc that delivered an aggressive punch of citrus. More potatoes came with the meat main, comprising slivers of perfectly rare bavette (flank) steak. The beef was teamed with roasted and crushed new potatoes that verged on being burnt, onions that were intentionally burnt, some more avocado, and a cep powder. Curiously, the powder was not dissimilar to the seasoning used within a bag of McCoy’s ‘Flame Grilled Steak’ crisps, within this I found deep comfort, which is perchance cause for concern.

A dessert of burnt honey (honeycomb by any other name) with malted ice cream was fine, albeit slightly unremarkable. It was the cheese doughnuts, however, that provided the irrefutable highlight of dinner at The Frog. Instead of using a stodgy batter to encase the savoury filling, like so many other London restaurants, the casing here is far closer to a heavy choux pastry. These were piped with ludicrous amounts of molten hot parmesan and topped with an equally outrageous smattering of grated truffle, plus even more cheese. Not only are they the best thing we ate here, the cheese doughnuts are a strong contender for the finest thing I’ve eaten in 2016, thus far. They were so good, in fact, that I could have eaten a whole Croquembouche of the savoury parcels while awaiting the arrival of a defibrillator-equipped paramedic.

Though some of the dishes fail to amaze, it’s undeniable that Adam Handling is a remarkably talented young chef. And while some offerings from the tasting menu do seem so experimental that they’re in need of refinement, those that do work provide a truly brilliant example of the Chef’s culinary expertise. They are also some of the finest that the city has to offer at this particular price point.