By Jonathan Hatchman, Food Editor, @TLE_Food Just around the corner from Whitechapel Road, the East Dispensary Hospital was erected in 1782, founded by a selection of doctors with help from the Duke of Wellington. Originally set up as an attempt to provide medical treatment to the poor citizens of the area back in the late […] 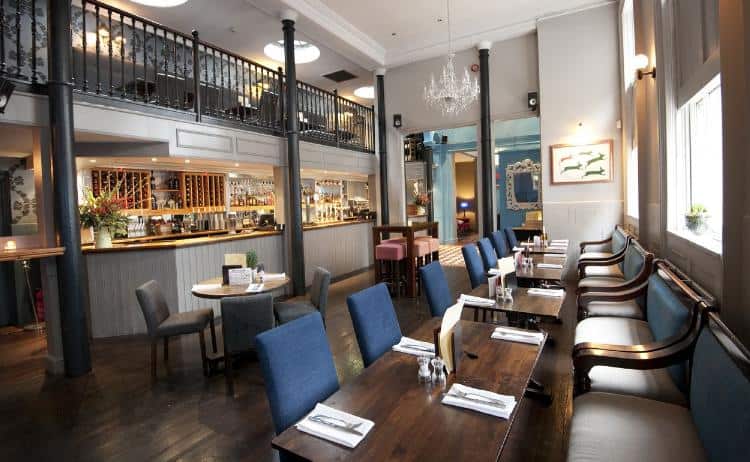 Just around the corner from Whitechapel Road, the East Dispensary Hospital was erected in 1782, founded by a selection of doctors with help from the Duke of Wellington. Originally set up as an attempt to provide medical treatment to the poor citizens of the area back in the late 18th century, the venue now acts as a pub/dining room that boasts an interesting mix of hearty pub food and elegant A La Carte treats.

So with historical connections that include the Duke of Wellington, as well as Queen Victoria’s surgeon Sir John William who used to operate within the building – becoming one of the prime Jack The Ripper suspects, there are many reasons to visit this East End institution which was taken over, in 2006, by Chef David Cambridge and his partner Annie Smith who acts as Front of House Manager.

From outside, the grade-two listed building resembles a grand dining space that reminds us of some of the City’s gourmet restaurants at the other end of the Monopoly board. However, the un-pretentious interiors are misleading when it comes to the accomplished menu. But at the end of the day, The Dispensary is essentially still a “gastro pub”, having won two ‘Pub of the Year – East London and City’ awards by Campaign for Real Ale (CAMRA).

With the Lunch menu on offer during our recent visit to The Dispensary, its clear that Head Chef David Cambridge aims highly. All of the produce comes from the local Smithfield and Billingsgate Markets and there’s a choice that includes a selection of classic dishes that Cambridge has placed his own stamp upon. For starters there’s a gastro pub classic – Smoked Meat Board, Bufala di Mozzarella and Confit Tomato, Asparagus with a Fried Duck Egg (ours was accompanied by a Hen’s egg, having run out of Duck’s): satisfactory but a little pricey, and a Potted Duck Confit. Served on a chopping board, the Duck is delicious, albeit a little oilier than ideal, served with strips of Artisan toast and a sweet Prune and Fig Chutney that compliments the Duck.

On to the main courses, although there’s some more adventurous fare, being a big fan of well-executed Beef Burgers, I couldn’t resist The Dispensary Steak Burger served with triple-cooked chips. The Burger in itself is good, thick, tender and slightly pink, but towered between two slices of thick Ciabatta bread and filled with salad and lashings of house Relish, it does become extremely difficult to remain dignified while eating. Faced with a number of choices: cutting into bite-size chunks, which is almost impossible given the size proportions between the huge sandwich and tiny chopping board in place of a plate, or to dive in and deal with the mess afterwards. On the other hand, my companion opted for the daily special – a thick fillet of Roasted Cod served prettily atop a bed of Sautéed New Potatoes and Black Pudding while topped with an unctuous Pesto. Cooked well, the Cod dish from the DC’s Kitchen part of the menu was also enjoyable, but given the slight greasiness of the sauce, a replenishing dessert was, most definitely, necessary. Thankfully, aside from the rest of the dessert menu, a sharp Blood Orange Sorbet was on offer to restore harmony.

The ambition that’s presented through Head Chef David Cambridge’s menu is admirable, yet with a few small imperfections, a menu of simpler dishes may have pushed our enjoyable meal into the realms of exceptionality.

The Dispensary Pub & Dining Room can be found at 19a Leman Street, London, E1 8EN.