By Jonathan Hatchman, Food Editor @TLE_Food One of the cultural pinnacles of Central London – The National Portrait Gallery -situated on the edge of Trafalgar Square re-opened the doors to its Portrait Restaurant last month. The current contract is owned by Company of Cooks, who took it over in 2013 from another company, the restaurant closed for […] 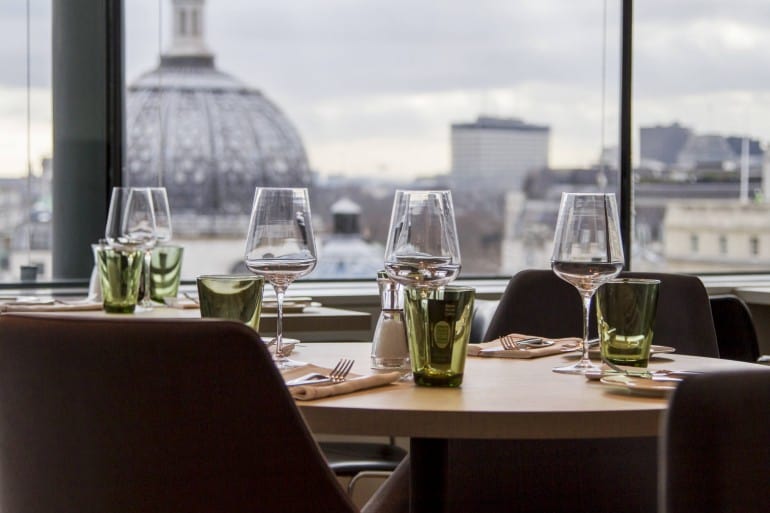 One of the cultural pinnacles of Central London – The National Portrait Gallery -situated on the edge of Trafalgar Square re-opened the doors to its Portrait Restaurant last month. The current contract is owned by Company of Cooks, who took it over in 2013 from another company, the restaurant closed for refurbishment at the beginning of this year, also reigning in a new culinary director Helena Puolakka, having previously worked alongside the likes of acclaimed chefs Pierre Koffmann and Pierre Gagnaire before moving onto Skylon and Harvey Nichols’ Fifth Floor Restaurant. Joining head chef Steve Beadle to add a new flavour to the worldwide tourist attraction’s restaurant, as well as revamping the menu that’s on offer at the Portrait Restaurant.

So as we headed over to the gallery on one of their Late Nights, jumping into the speedy lift sending us to the third floor restaurant, we found ourselves in the newly upholstered space seated at a window-side table, boasting sweeping views across the City’s rooftops. With Nelson’s Column and the Houses of Parliament taking this artistic view’s focal matter. Unfortunately, the long and narrow dining area filled with busy post-work diners provided an ambience that was marred by the venue’s acoustics that made even the most tranquil whispers sound like an impertinently ostentatious battle cry. However, the expectation exceeding food did make up for the tumultuous noise levels. Especially considering the glasses of expertly matched wine served with each of our three A la Carte courses.

Beginning with the buttery Rabbit and Pancetta agnolotti (£9.50) and Cornish sticky deep-fried Squid (£10). The pasta was decent, but the Squid dish was the real star: offering perfectly cooked fish (thankfully refraining from taking on the texture of a military boot sole) presented upon a bed of fennel and red chicory laced with scatterings of fiery chilli and thirst quenching pomegranate seeds. While the Roast Turbot main sounded so delicious that both of our party felt obliged to order (as was the case with the Honeycomb parfait dessert). The former included a generous slab of the meaty fish, with the salty, crispy skin still attached (thankfully) served atop a helping of parsnip puree and sweet baby onions, joined by a small glug of a gentle red wine sauce. While the final course of smooth frozen honeycomb joined by a trio of tea-soaked prunes and candied hazelnuts was nothing short of remarkable.

The food, drink and service on offer with this dining experience impressive, to say the least, yet the cavernous corridor like area’s noise issues are relatively tedious. However, the quality of the restaurant’s food is enough to make a trip to the newly reopened Portrait Restaurant most recommendable, especially before the capital’s foodies and gastro elitists begin to find out about the hidden culinary treasure on the gallery’s top floor.

The Portrait Restaurant and Bar can be found at the National Portrait Gallery, St. Martin’s Pl, London WC2H 0HE