“Are you with me, or are you with The Woolwich?” Otto Tepasse probes before insisting I become heavily involved in the ceremonial crushing of a duck carcass. The question has no real relevance, but it’s just one key example of the endearing eccentricity that environs dinner at Otto’s – a classic French restaurant named after […]

“Are you with me, or are you with The Woolwich?” Otto Tepasse probes before insisting I become heavily involved in the ceremonial crushing of a duck carcass. The question has no real relevance, but it’s just one key example of the endearing eccentricity that environs dinner at Otto’s – a classic French restaurant named after its off-the-wall owner.

Opened in 2011, between Chancery Lane tube and King’s Cross, the restaurant has such nostalgic charm, it seems as though it might have been operating since Augustus Escoffier brought haute cuisine to London during the late 1800s. Surprisingly illuminated like Blackpool seafront, the space is fairly compact, cosy with plush banquettes and thick white table cloths, bedecked with an abundance of Marilyn Monroe ephemera and various duck and lobster ornaments. On the menu, French classics include the likes of Alpine Simmental beef with foie gras and a sauce of Madeira and truffle; Burgundian snails baked in parsley and garlic butter; or boudin noir – but the main draw is the pressed duck. But be warned, the dish is not for the faint of heart.

Pressed duck has been a speciality of Parisian restaurant Tour d’Argent since the 1800s, while Otto’s is the only restaurant in London to serve the classic French dish. In his 1999 cookbook Ducks & Geese, S G B Tennant Jr. described the dish as “the height of elegance”, using the entire bird to create a three-course meal. Traditionally, each duck is partially roasted, its breast and legs relieved, liver reserved for the first course, then the carcass is crushed (to make a sauce) in a specially-designed duck press. At the time of writing, these elegant presses fetch up to £3,000 on eBay. To make the sauce, the blood is then reduced with butter, Cognac, port, Madeira wine, lemon and foie gras.

In most 21st century restaurants, the focus is on the chef. At Otto’s, however, service is equally (if not more) important. It is at the table that all of the theatrical glamour of yesteryear ensues and captivates. Between the tableside presentation of the entire raw Challans duck and its brief roasting time, Otto appears with a copper pan filled with Cognac, red wine and Madeira; wielding a box of matches in his other hand. After a tornado of fire threatens my eyebrows, the sauce base is left to reduce while we order starters.

“You are having the Ris de Veau”, Otto insists. I’m given a choice, but assured I’ll love it – “I know you will enjoy this. You have one of those faces”. I’m unable to decide whether that’s a good or bad thing, but he’s not wrong; the dish is sensational. A singular calf’s sweetbread (throat gland) is braised then embellished with nuggets of calves’ kidney, a plump langoustine, grapefruit segments and an outrageous sauce of wine, cream and stock made from the shells of langoustine. The dish’s ingredients read like a recipe for imminent cardiac arrest, but the flavour is simply sublime. A velouté of Jerusalem artichoke is also unreasonably decadent, grandly capped with a shower of black truffle shavings.

The roasted duck is then presented at the table, convoyed by slices of brioche topped with the bird’s livers, sautéed in an ambrosial reduction of red wine. The legs are carved and sent back to the kitchen to be confited, then the breasts are deftly lacerated before the carcass is arranged into a vessel not dissimilar from a miniature iron maiden torture chamber. This enters the duck press and I’m summoned to wear a heavy longhorn Viking helmet and turn the wheel, in front of the whole restaurant, raising eyebrows as I barbarically crush the duck’s bones to extract the blood, bone marrow and offal. This stream of claret liquid is caught in a pan and reduced, combined with the alcohol reduction. 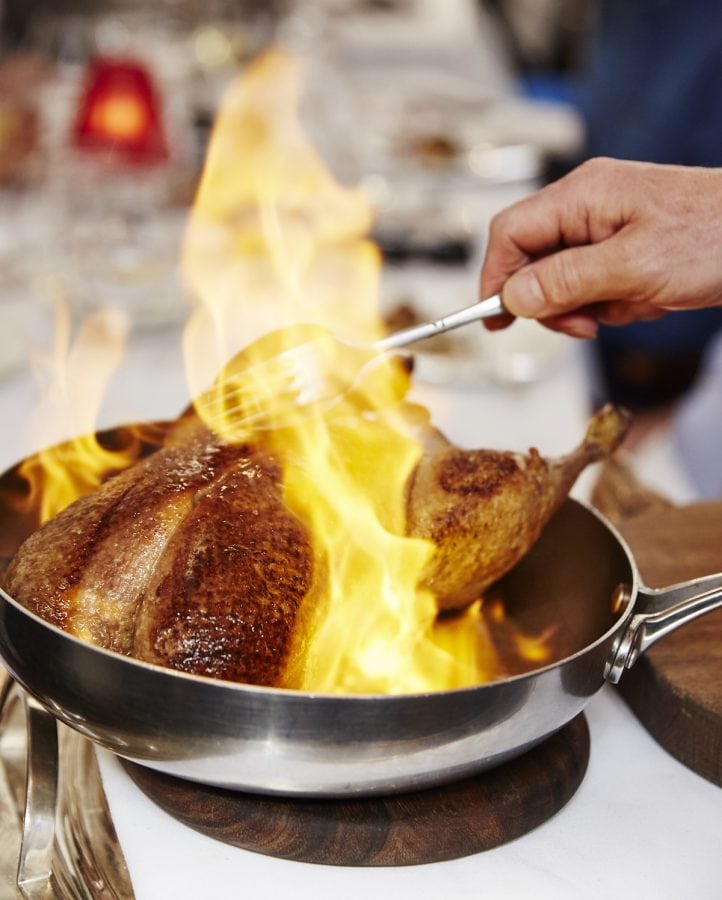 The breasts are then sliced and served with perpetually prepared pomme soufflés (another rare treat) and the chocolate-brown sauce. The sauce is so rich I can feel the years eroding from my natural life span with each mouthful, but I couldn’t care less – the flavour is really that enchanting. Next, the legs return with their crisp skin and flesh that shreds on contact with the fork. These are served with some more sauce, crispy skin that’s cooked in cider, and offcuts from the breast finished in an orange sauce. The duck cookery is superlative, though it’s the sauce from the press that’s most memorably sating. We finish with a slightly underwhelming Gran Marnier soufflé, which still tastes of egg white, and a rum baba so boozy it seems a fitting conclusion to an evening of such gluttony, such unadulterated decadence.

The space is brilliantly bonkers, service is classically charming and the food (overlooking dessert) is generally sensational. Clocking in at just under four hours, dinner is more of a marathon than a sprint; but with a real sense of occasion and dishes seldom seen within Europe, let alone London, Otto’s offers a dinner experience like no other on this side of the Millennium.