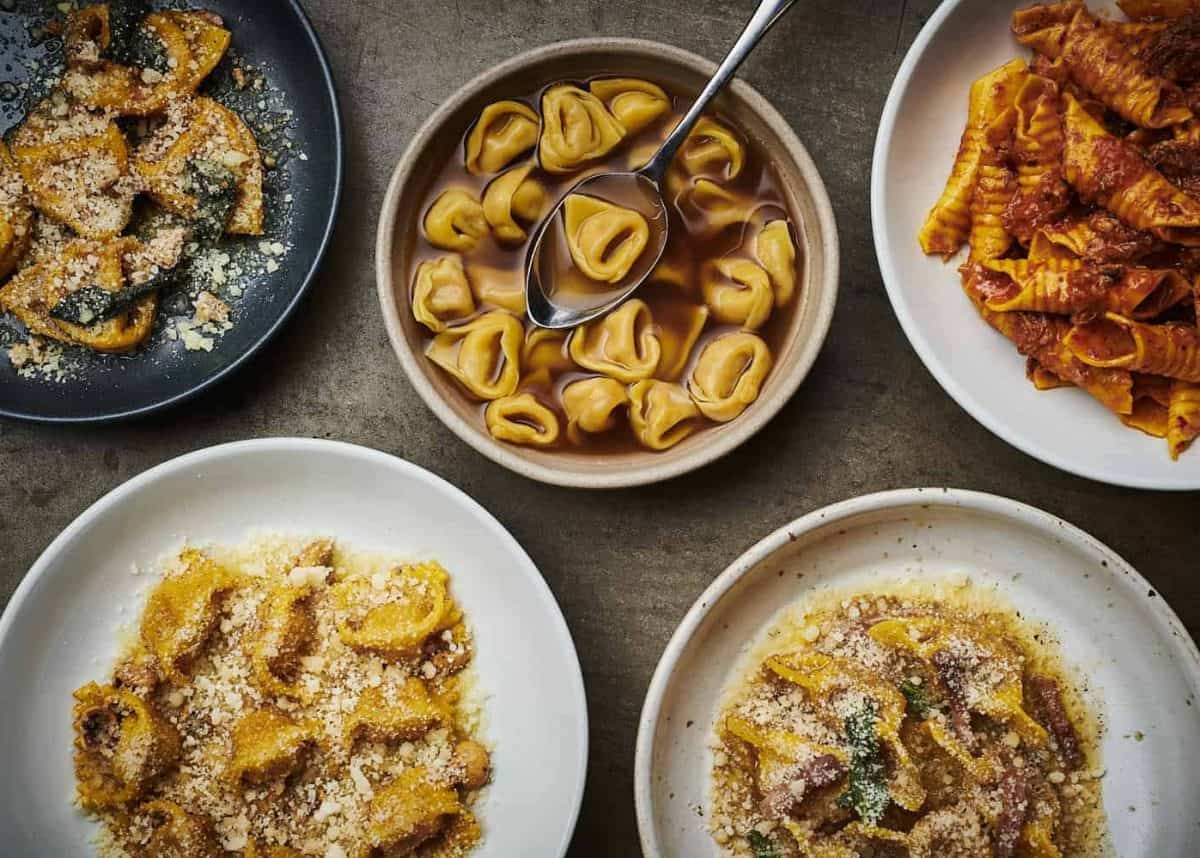 Before the effects of the coronavirus forced UK restaurants to temporarily close, it was almost impossible to book a table for dinner at Manteca between the hours of seven and nine o’clock on Fridays and Saturdays.

While hospitality restaurants in England were given the go ahead to re-open on Saturday 4th July, Manteca finally re-opened with some new measures late last month. Open for dinner from Thursday – Saturday, the restaurant is also open for lunch from Monday – Wednesday, taking part in the government’s ‘Eat Out To Help Out’ scheme throughout August, further highlighting the restaurant’s good value. A house-baked focaccia is available with two pasta dishes and a scoop of either gelato or sorbet for £20. Just £10 with the discount.

Elsewhere, to facilitate social distancing, the large room has been slightly redesigned with more space between tables. With its polished concrete floors, plants dangling from macramé and soft lighting provided by filament bulbs – the space reads like a checklist for a stylish 2020 restaurant: somewhat less comfortable than most Italian-inspired restaurants, but relatively unpretentious at least. Service, on the other hand, is lovely. Staff respect social distancing but are still keen to discuss food choices. Moreover, a downstairs ‘social bubble’ is available to hire as a private dining room for up to 20 people.

On the re-opening Chris Leach said: “After a challenging and uncertain few months, we’re looking forward to opening the doors and welcoming guests, old and new, back to Manteca. We’re very fortunate to have a big space to allow for social distancing and have re-formatted the restaurant and restructured the business to open safely, sustainably and allow our guests to feel comfortable. The menu will be a continuation of what we’ve always done but with the addition of our take on an Italian sub, inspired by some amazing local little places in Rome and Bologna, to give guests the option to grab and go.”

On a recent Saturday evening, a table for two was booked for seven o’clock with absolutely no problem: a sad state of affairs for the restaurant industry and the greater economy, but also worth taking advantage of while possible.

Dinner began with a plate of cured meats, best of which was the restaurant’s mortadella made in house. A dish that proves the menu’s apparent simplicity is misleading. Sourcing whole animals from small, independent farms in the UK, everything from the skin to the fat of the animal is used where possible. With a rougher texture and bolder flavour than the typical smooth, heavily processed cold cut, Manteca’s mortadella is a revelation, as is the chicken liver parfait. Served with a slightly sweet date jam, the parfait is silky and iron rich, heavy with butter and cream, gorgeously offset by heavy char lines worn by accompanying strips of grilled ciabatta. Another highlight featured plump steamed mussels amplified by the heat of ‘nduja, bathing in a sauce of cream and parsley, while a hidden slice of bread acted as a sponge for the sauce and cooking liquor.

From the menu’s four pastas, brown crab cacio e pepe read like an absolute dream: with the use of brown crab – a god-tier ingredient – hopefully compensating for the fact that this is most certainly not one for cacio e pepe purists. While the overall flavour was fine, the tonnarelli was slightly overcooked, which would be easier to overlook if the sauce hadn’t become claggy. Significantly less loveable than the sweetcorn ravioli – lauded as a ‘signature dish’ from Chris Leach’s 10 Heddon Street residency. Thin pasta shells were filled with perfectly ripe sweetcorn, lavished with a buttery sauce and embellished with girolles and peppery nasturtium leaves. It’s the sort of cooking that renders Manteca not just one of Soho’s most exciting restaurants, but one of the best additions to London’s endless wave of accessible pasta-centric restaurants.

This article was amended on 7th August 2020, including updated information on the restaurant’s new lunch offering.