By Jonathan Hatchman, Food Editor, @TLE_Food While there are few vaster pleasures than great pizza, there are even fewer things worse than really, offensively terrible pizza: and with a plague of bad ‘pizzerias’ constantly opening across the city, the former is becoming increasingly difficult to unearth, persistently subjecting us to the latter on far […] 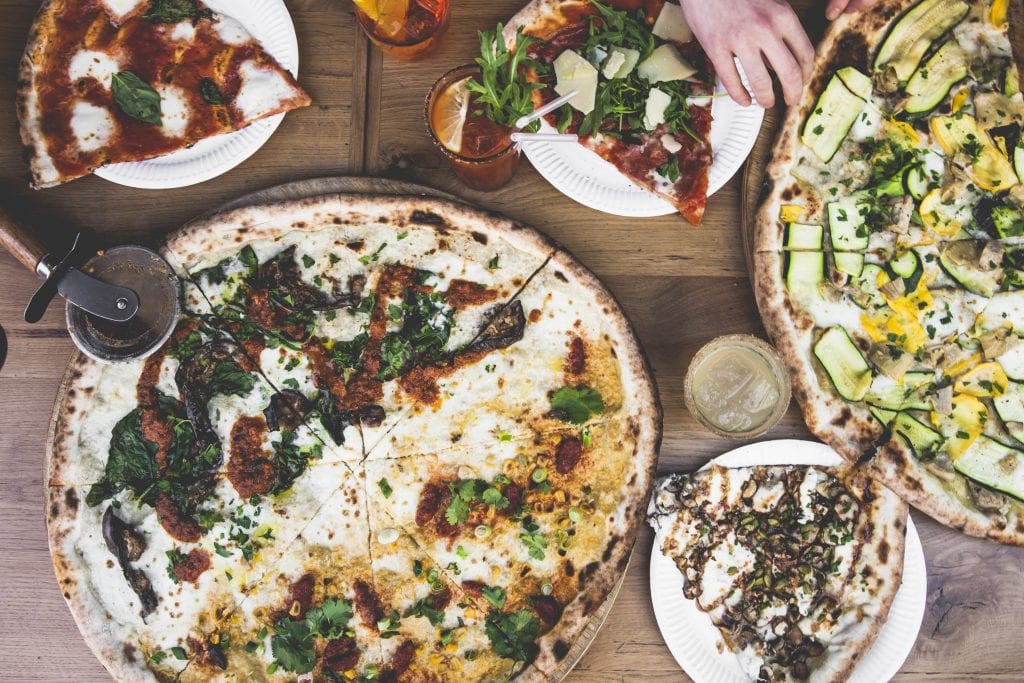 While there are few vaster pleasures than great pizza, there are even fewer things worse than really, offensively terrible pizza: and with a plague of bad ‘pizzerias’ constantly opening across the city, the former is becoming increasingly difficult to unearth, persistently subjecting us to the latter on far too many occasions. Soggy, shop-bought dough bases wetter than a mid-June weekend, heavily-sweetened tomato sauce, and cheese that resembles the plastic used to manufacture paddling pools: you name it – it’s almost guaranteed that all of these crimes against food can be found within 150 metres of your front door. And why must so many be named with a plagiaristic nod to classic Mafia movies, or with the token implementation of Italian towns that owners have never even visited, let alone hailed from? Fortunately, a number of new innovative pizzerias are popping up across the city, Homeslice is one of which – having started life during 2011, operating from the courtyard of London Fields Brewery.

Two years later, Homeslice’s first permanent site opened in Covent Garden’s Neal’s Yard in 2013, followed by two further openings last year in Fitzrovia and Shoreditch. The latter is located towards the Hoxton end of Old Street, set across two floors with a low-lit downstairs basement bedecked with unfussy, low-thrill interiors that fit alongside a simple menu of 20-inch pizzas with all sorts of adventurous toppings, created with a prominent focus on quality ingredients. Every ball of dough is made in-house using high protein German 405 flour, before being aged for at least 24 hours and cooked within the restaurant’s own custom-built wood fired oven, all of the sauces are also made in house, and cheese is sourced from both Neal’s Yard and Naples, from where their fresh mozzarella is delivered twice weekly.

In addition, it’s the focus on understated simplicity within every other aspect of the restaurant that makes Homeslice so amiable. Ten different pizza toppings are on offer with nothing else available in terms of food, allowing the pizzas to take the spotlight. The drinks menu is also limited to Prosecco on tap, and just three different wines; one white, red, rosé, served in tumblers, (just like in The Godfather films, as my companion instantly noticed). A small number of reasonably-priced cocktails are also available – a Bloody Mary which favoured the use of mezcal, for instance, was superb and all the better for being unrestrained in terms of spicing. As for the pizza, toppings of margherita; salami, rocket and parmesan; and courgette with artichoke are available by the slice or as a whole 20-inch pizza, while the rest of the toppings are available exclusively whole. We are, however, encouraged to order a “half and half” toppings split as 20-inches of one single topping combination can grow tiresome.

Arriving on a huge board, the pizza is far less nostalgic of children’s birthday parties than the paper plates suggest. On one half, the deliciously fluffy base was slathered with a rich tomato sauce and topped with small hunks of slowly-braised oxtail, lending a depth of flavour that’s far superior to many flashier, more expensive cuts of beef. In addition, a smattering of watercress delivered harmonious notes of pepper, alas the topping of wafer-thin radish was so delicately employed – the small tickles of welcome sinus-cleansing heat were overshadowed by the richness of the tomato and oxtail. On the other half of the base, an expert combination of tender, fatty goat shoulder worked perfectly alongside a yogurt flecked with sumac to cut through the meat’s richness. Combined with crunchy savoy cabbage and no need for any tomato, the depth of flavour and texture does in fact work as a strong contender for the most satiating pizza topping I’ve ever tasted.

It’s undeniable that the contemporary approach at Homeslice is far from suitable to purists of Neopolitan tradition. However, the restaurant’s unique selling point is retained without an unnecessary further gimmicks, with nothing to detract from the quality of the pizzas that provide a welcome retreat from the city’s uncountable institutes of genuinely horrendous pizza.