Through the opulent lobby and down a spiral staircase – behind a seedy bar with low lighting and a floor-to-ceiling palette of red – The Curry Room is hidden beneath the The Rubens at The Palace hotel. Following a multi-million-pound refurbishment, the hotel now boasts upgraded rooms and guest areas, plus a complete dining overhaul. […] 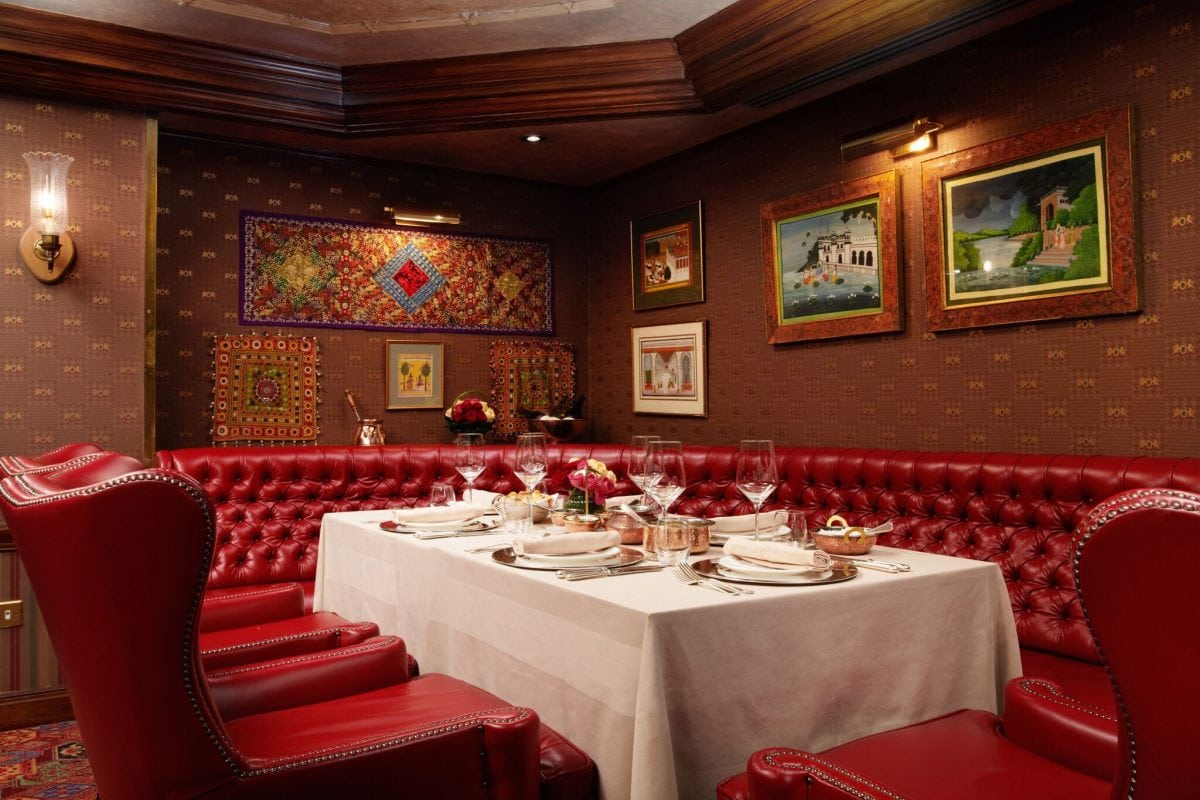 Through the opulent lobby and down a spiral staircase – behind a seedy bar with low lighting and a floor-to-ceiling palette of red – The Curry Room is hidden beneath the The Rubens at The Palace hotel.

Following a multi-million-pound refurbishment, the hotel now boasts upgraded rooms and guest areas, plus a complete dining overhaul. Alongside the aforementioned Cavalry Bar, The English Grill offers fine dining, while The Curry Room is the hotel’s latest restaurant opening, launched earlier this year. Here, the windowless room is similarly flushed with warm accents of pillar box red, bedecked with low oxblood leather seats, plush against heavily starched table linen. Although a brand new restaurant, The Curry Room seems so rooted in tradition (in both its décor and its food offering) that it’s not a million miles away from the British curry houses of the 1970s, open later than pubs and thus a natural hit with those wishing to continue drinking late into the evening.

As for the food, The Curry Room serves a three-course a la carte menu (£35 per person) that strives to fuse classic, authentic Indian flavours with South African flourishes. On the restaurant’s launch, The Curry Room’s chef, Arun Kumar, worked closely with Kevin Joseph, Executive Chef at The Rubens’ sister hotel – The Oyster Box Hotel in South Africa – to design the restaurant’s menu. Split into three-courses, the menu contains a set starter, a choice of seven mains and four desserts. The fair assortment of old and new world wines is also of note, including a selection of bottles from Bouchard Finlayson, The Rubens’ sister vineyard in South Africa. The vineyard’s Galpin Peak Pinot Noir is excellent, and so it should be at £56 per bottle. Indian beers such as Kingfisher and Cobra are also (unsurprisingly) available.

Dinner begins with a greaseless keema samosa, packed with well-spiced lamb mince, and an assortment of equally crisp poppadums with mango chutney, lime pickle and mint raita. Each of the condiments are basic, but fine – classic curry house fare. To follow, Natal lamb curry honours a rich history that stretches over the past 150 years. During the 1860s, Indians brought to Durban, as labourers, transported their curry spices from Gujarat and Tamil Nadu. These eventually ran out, and the workers were forced to adapt their recipes with readily available spices. At The Curry Room, the dish is rife with fresh tomatoes, garlic, fennel and slowly-braised lamb whose menial fat lavishly oozes into the rich gravy.

Across the table, beef Vindaloo comes with the option of substituting beef for traditional pork. My companion opts for beef, arriving in a sauce of white wine vinegar and tomato but with far less of the profound heat synonymous with the dish. Although Vindaloo is so often tampered with, to the point of uncomfortably excessive heat, this version is the polar opposite; in which it is bland, dramatically under-spiced and under-seasoned as though designed especially for a boring British Baby Boomer palate. Both curries are served with tureens of Basamati rice, lentil dhal that’s unrefined yet comforting and strips of fresh naan bread.

To finish, a slice of baked vanilla cheesecake is prepared according to the recipe of Red Carnation Hotels’ Founder and President, Bea Tollman, and it’s pleasant enough – as is the traditional trifle with its layers of sponge, custard and strawberry jelly that looks as though deliberated by the restaurant’s interior designer. At the next table, a couple of ageing Americans are bewildered by the concept of a trifle, but bewitched by the quaint British-ness of this curry house. And that’s exactly what The Curry Room is: an untouched time capsule evocative of 1970s curry houses. A fine tribute to a British institution; dinner at The Curry Room is pleasant enough, but doesn’t quite pull the necessary punches to compete with the exhilarating local competition.

The Curry Room can be found at 39 Buckingham Palace Road, London, SW1W 0PS.