Earlier this month, Martin Morales announced plans to open Andina Panaderia – London’s first Peruvian bakery. Capitalising on the booming popularity of Peruvian cuisine in London at the moment, the bakery will open alongside a new restaurant (Andina Picanteria) and specialise in slow-ferment baking with breads and pastries such as Andean black mint and sweet […]

Earlier this month, Martin Morales announced plans to open Andina Panaderia – London’s first Peruvian bakery. Capitalising on the booming popularity of Peruvian cuisine in London at the moment, the bakery will open alongside a new restaurant (Andina Picanteria) and specialise in slow-ferment baking with breads and pastries such as Andean black mint and sweet potato sourdough, and Chicha morada muffins made with purple corn; harbouring a corn and almond centre. The paint has barely dried, but it’s already clear that the Notting Hill bakery will be a resounding success. It’s surprising that nobody has opened such a venue before now, given that Peruvian food is so ubiquitous in 2018.

With other restaurants such as Ceviche and Andina, Martin Morales is a vital ambassador for Peruvian cuisine and is partially responsible for its exponential popularity in London. Other key Peruvian restaurant titans include Michelin starred Lima, with an accessible sister branch (Lima Floral) near Covent Garden; Coya with restaurants in Mayfair and the City; and “vibey” Pachamama, the parent brand of Chicama in Chelsea.

Opened in 2016, Chicama occupies a space previously occupied by an Italian neighbourhood restaurant. Although modernised considerably, the restaurant retains a neighbourhood feel, with prominent focus on Peru’s bountiful coastline. Chicama has such a strong seafood focus, in fact, the entire menu is free from meat – celebrating many interesting ingredients native to Peru. All seafood served here is sourced from Cornwall, delivered daily.

Perched on an unexciting corner of Kings Road, Chicama’s décor is heavily inspired by Chicama beach in northern Peru, festooned with salvaged wood, vintage mirrors and shell pink tiles. A photogenic pastel marble counter stretches across the restaurant, separating the dining room and open kitchen. Tables are somewhat cramped, but the vibrant atmosphere compensates, as do the notably polite, enthusiastic staff. Dinner began with a round of Pisco sours (naturally), quickly followed by snacks of ‘popped-corn’ monkfish cheeks: deep-fried but greaseless and crunchy – like really good scampi. The flavour of ají Amarillo running through accompanying mayonnaise was harmonious with the fish’s definitive meatiness. 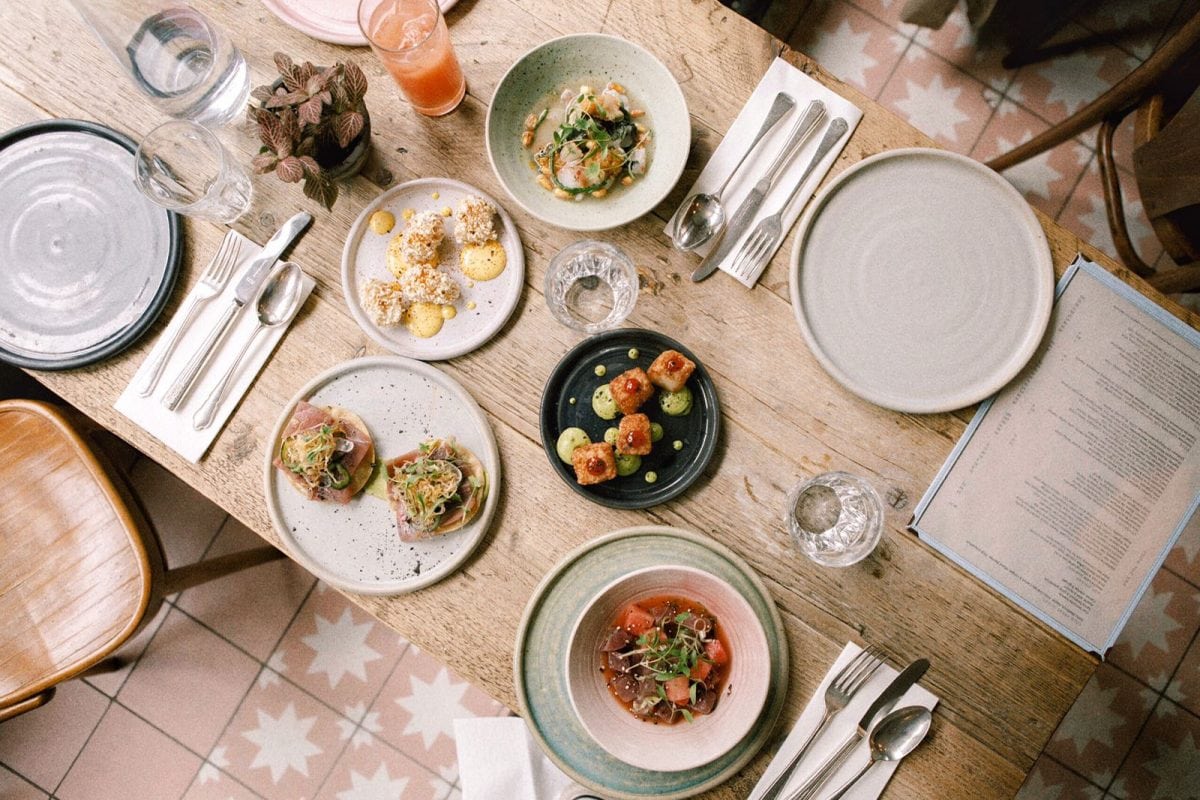 Tapioca marshmallows, on the other hand, were far less of an absurdity than they seem on paper. Made without eggs or sugar, the savoury ‘marshmallow’ cubes are texturally intriguing, like actual marshmallows, but deep-fried, rife with the flavour of parmesan and a fair hum of chilli. One of many fish dishes, a plate of sashimi-grade tuna was almost Japanese in its execution. The fish was of unmistakably high quality, thickly sliced and served raw with creamy avocado puree bolstered by jalapeno, a squeeze of lime juice and fried ribbons of crispy leek to add textural depth.

Ceviche is, unsurprisingly, celebrated within Chicama’s pescatarian menu. A sea bream iteration featured dice of raw fish whose inherent clean flavour was contrasted with sweet, earthy candied beetroot, pomegranate seeds and scorched cucumber. A convoying puddle of tiger’s milk had fair acidity, from a generous squeeze of lime, but was otherwise wishy-washy.

Of all the sea’s bounty, octopus is perhaps the most beastly to prepare properly – but one of the most delightful, when done well. Here, blackened octopus’ tentacle was well-cooked; buttery even, finished with ferociously umami sundried tomatoes, charred cauliflower and nuggets of confit potato. The octopus cooking was superlative, as were the dish’s other elements, though the cauliflower held little purpose and a squeeze of lemon would have been appreciated.

Dinner at Chicama isn’t without slight blemishes, but the fish dishes are almost all triumphs, complemented by charming service and a twee setting that’s a million miles away from the ostentation of Made in Chelsea. Brunch at Chicama is also unsurprisingly popular: a reminder of Peruvian cuisine’s unwavering attractiveness in the restaurant capital of the world.