French cuisine is undeniably some of the world’s finest, but within multi Michelin-starred temples of fine dining it’s often chintzy and over complicated. Last year, for instance, I almost had my own Mr Creosote moment over lunch at one of Paris’ most luxurious hotels. By the time I’d snarfed five courses of fare laden with […]

French cuisine is undeniably some of the world’s finest, but within multi Michelin-starred temples of fine dining it’s often chintzy and over complicated. Last year, for instance, I almost had my own Mr Creosote moment over lunch at one of Paris’ most luxurious hotels. By the time I’d snarfed five courses of fare laden with more butter and cream than Marco’s ‘White Heat’ cookbook, the wafer-thin mint scenario came with the waiter’s insistence that I bolt through just one more plate of petit fours with the arrival of bill that knocked the wind out of me. Yes, it was one of the best meals I’ve ever had the pleasure of eating, but the immediate discomfort didn’t bode well for the rest of the day, or for the three-hour train ride back to London.

Not all French restaurants will insist on bolstering diners like geese destined for foie gras, though. Generally speaking, these are the small humble places more bistro than gastro-palace, like Petit Pois in Hoxton, or newly opened Blanchette. At the Bethnal Green end of Brick Lane, directly opposite the bagel shops, the pistachio-green fronted venue’s entrance section features a large bar overlooked by a mural recreation of Jean Auguste Dominique Ingres’ Grand Odalisque, while the slightly raised main dining section is so quintessentially French, I half expect to meet Asterix and Obelix on the next table, feuding over the last escargot de Bourgogne. Here, bare brick walls are joined by mismatched tables, Bentwood chairs and sporadic brocante sourced ‘shabby chic’ ephemera.

The second restaurant from brothers Maxime, Yanis and Malik Alary, having opened Blanchette Soho in 2013, the menu here is exclusively rooted in sharing plates – as is mandatory in 2017. Styled as ‘French Tapas’, the menu boasts some stone cold French bistro classics (confit duck leg, or frites and béarnaise), a vast cheese and charcuterie offering, plus dishes with pronounced nods to north African cooking. But first, the frog’s legs. Frog’s legs are the pinnacle of ignorantly stereotypical French cuisine, generally out of favour in the UK. In fact, even at the most ludicrously opulent French restaurants here in London, I’ve never seen frog’s legs on the menu. At Blanchette, the frog’s legs (£6) are properly butchered, with the flipper removed, breaded and deep-fried: served like chicken wings but with superiorly intense flavour. An absolute must-try.

Also from the menu’s ‘snacks’ heading, cheese beignets (£4) – little bite-sized savoury doughnuts piped with molten cheese – are made to be gobbled with gusto. The escorting puree of sweet caramelised onions is fine on its own, but has depth of flavour too profoundly overpowering when paired with the delightful beignets. Salmon tartare (£8.50) comes highly recommended, served on a small chopping board. The quality of the salmon is impeccable, but the additional sludge of aubergine and tomato, complete with some Egyptian dukkha spice, completely subjugate the taste of the dish’s delicate key ingredient. 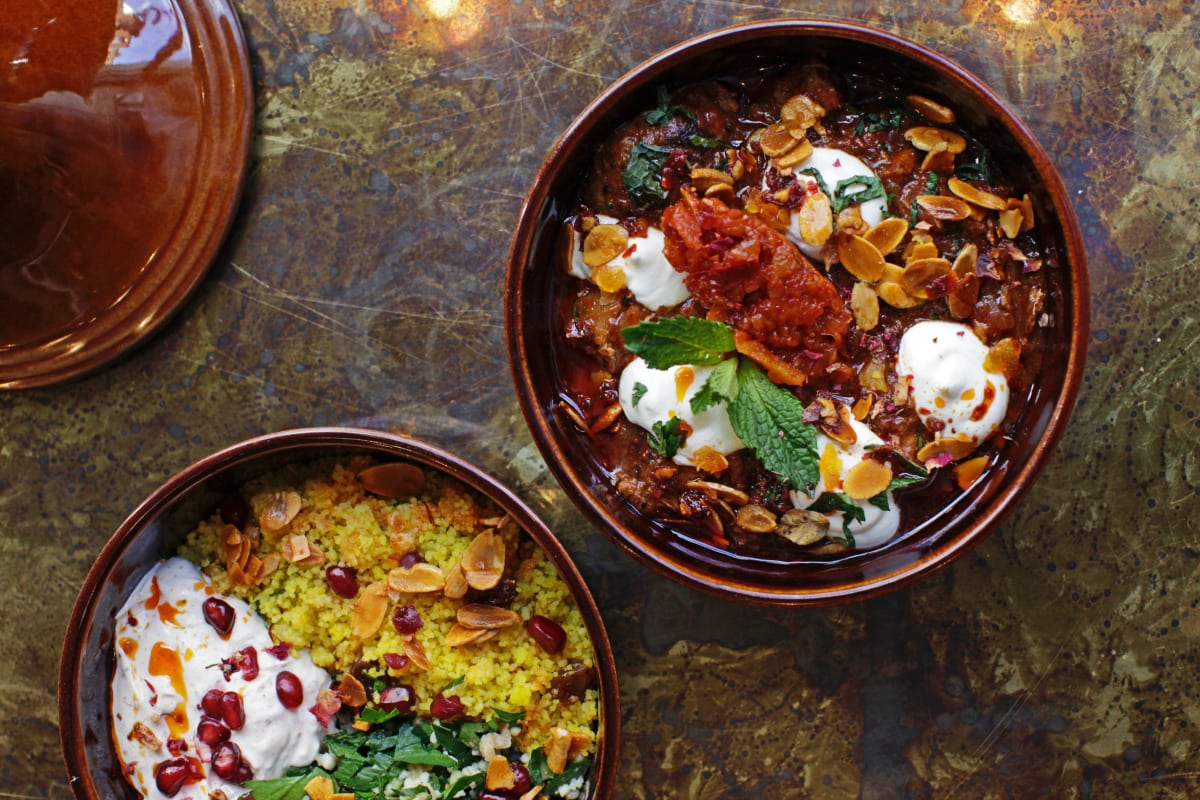 Mutton and sweet potato tagine (£9.95), no less, is an absolute triumph. Brought to the table in a traditional tagine, the dish has incongruously rich sauce, percolated with fat and cooking juices from mutton cooked to the point of complete textural submission. The meat’s flavour, nonetheless, is absolutely sublime, complete with texturally contrasting sweet potato and a smattering of fragrant Moroccan spices. Alone, the tagine is one of the best dishes available in east London at the moment, but teamed with the supplementary side of saffron couscous, tabbouleh and pomegranate-flecked yoghurt (£6) – sacré bleu, it’s near perfect. To finish, an assortment of desserts is available, but the cheese is (obviously) irresistible. Classic crowd-pleasers camembert and comte are available, plus Morbier – a semi soft cow’s milk cheese with pleasant waxy texture and a layer of ash that brings intense depth of taste.

Lunch at Blanchette’s new east-end counterpart is, for the most part, delightful. The food is generally of a good quality, and reasonably priced, too. Elsewhere, the service is equal parts casual, knowledgeable and friendly, while the generally lax atmosphere is quite refreshing. In addition, the wine list is almost exclusively French, while the restaurant’s set-lunch menu (two courses £15, three courses £19.50) also offers tremendous value.