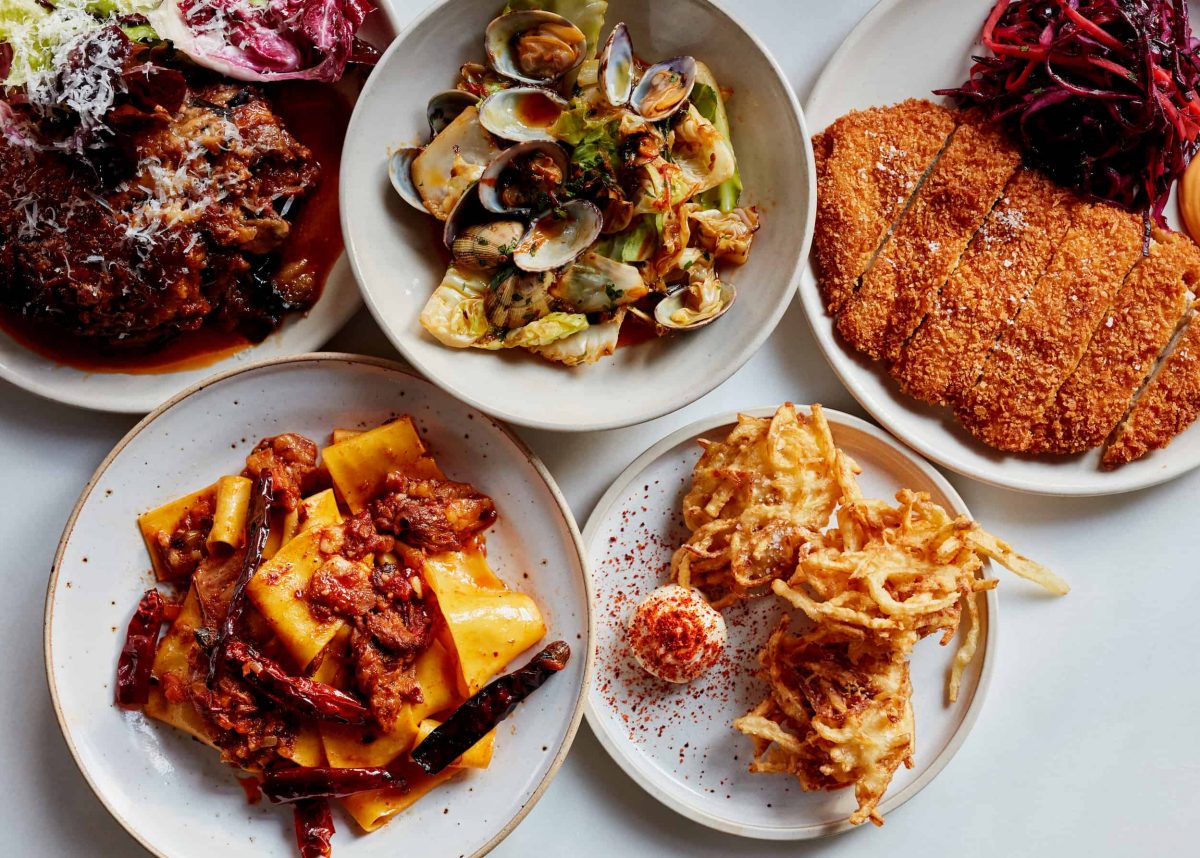 Following the success of Salon and Levan, Nicholas Balfe, Mark Gurney and Matt Bushnell are set to open Larry’s in Peckham. Alongside its next-door restaurant, Levan, Larry’s is named for 1970s dance music pioneer and DJ Larry Levan, and will stay open late into the night, playing music from its vintage Celestion Ditton sound system. Taking cues from the corner bars, diners and cafes of New York, the new restaurant will be open all day, serving breakfast, deli-style sandwiches for lunch, and a concise menu of sharing plates for dinner.

Breakfast will take inspiration from New York’s delis, with lox, potato latkes, sour cream, and dill pickle available; or ‘Larry’s breakfast’: two soft-boiled eggs, mortadella, Emmental, and focaccia. On to lunch, sandwiches will include the likes of meatball melt with pickles and aged Gouda, on focaccia. As for dinner, launch menu highlights include potato latkes with smoked cod’s roe; salt beef beignets; devilled crab with brown crab mayo, pickled fennel, bruschetta; XO cabbage with clams and house-made XO chilli sauce; and pig’s head ragù with pappardelle and Szechuan pepper. To finish, a daily changing cheesecake will be served alongside gelatos made in house, plus Babkas, doughnuts and pies all on rotation.

To drink, Larry’s will eschew a lengthy wine list in favour of a dynamic, lean and constantly changing offering of two wines of each colour (white, red, orange, rosé, and sparkling). These will take the form of a quality house wine and a guest wine from interesting, low-intervention winemakers. There will also be two cocktails and just one beer.

On the launch of Larry’s, co-owner Nicholas Balfe said: “Larry’s is somewhere we’d expect Larry Levan to go to after playing one of his sets. We’ve cherry-picked everything we love about eating in New York, and combined them into the kind of place we would want in our neighbourhood.”

Co-owner, Mark Gurney added: “It’s a naughty little brother: relaxed and informal. It’s the perfect spot for any occasion – a quick lunch, a glass of something natural and a bite to eat, or a leisurely dinner with friends.”

New York’s famed Japanese dining concept, Sushi on Jones will launch in London this month. Part of Goods Way – the new food, bar, and live music site in King’s Cross – the restaurant aims to embrace an accessible approach to traditional Japanese Omakase (meaning “I’ll leave it to you”). Referring to the tradition of chefs tailoring meals to each guest’s specific preferences, Uchū  Hospitality founder, Derek Feldman’s new restaurant will provide diners with a personalised experience, championing seasonality and the finest fish and wagyu beef sourced from Japan.

Inspired by the no-frills sushi counters of Japan, the new restaurant will serve guests a 12-piece Omakase menu in a timely 45 minutes, for £44. A variety of Sushi on Jones favourites will also be available to take away, while an a la carte menu will be available alongside the Omakase. Dishes from the a la carte menu are set to include the likes of ‘the Big Mac’, featuring wagyu A5 ribeye layered with sea urchin; Osuimono with seafood, or spinach and miso sesame; and nigiri such as yellowtail, king salmon, squid, sweet shrimp, and California sea urchin. Moreover, Sushi on Jones’ drinks offering will feature a selection of fragrant teas, sakes, Japanese whiskies, and cocktails showcasing meticulous Japanese technique.

On the launch of Sushi on Jones in the UK, owner Derek Feldman said: “I am so excited to be bringing Sushi on Jones to London  — our first opening outside of Manhattan. Food is such a powerful gateway to experience, allowing people to break through cultural barriers, and I am looking forward to sharing our passion for Omakase in one of the world’s most vibrant foodie capitals.”

Sushi on Jones is set to open in March and can be found at 11 Goods Way, London, NC1 4DP.

Celebrating Le Cordon Bleu’s 125th anniversary, the famed culinary institution will launch its first dining concept, CORD, in the UK later this month. Featuring a fine dining restaurant and a café, the venue will also house an outpost of the London Le Cordon Bleu culinary institute. Striving to bring a touch of Parisian luxury and glamour to London, the restaurant will serve a dinner tasting menu, an a la carte menu, and a weekly-changing set lunch menu, priced at £25 per-person. On the launch menu, dishes will include the likes of Heritage tomato carpaccio with creamy Buratti, faille de brick, Manchego, and Lampung pepper; smoked rainbow trout with fennel, pomegranate, apple, and yuzu; and Anuria milk-fed lamb from the Pyrenees, with polenta, sea herbs, and broad beans.

The café, on the other hand, will be open for breakfast and lunch, offering French patisseries and viennoiseries alongside gourmet sandwiches, fresh salads, homemade soups, and artisan breads. Moreover, London’s Le Cordon Bleu will also lead a series of gourmet short courses for aspirational chefs in worldwide cuisine, food and wine pairing, and patisserie.

On the launch of CORD, Le Cordon Bleu CEO & President, Mr André J. Cointreau said: “This year is a milestone for Le Cordon Bleu as we celebrate 125 years of excellence in teaching around the world and prepare ourselves to launch CORD by Le Cordon Bleu.  Now more than ever, there is a call for consistency and quality which is what we aim to deliver at CORD, bringing together unique techniques and the freshest, best-in-season ingredients across worldwide cuisines.  Our guests will join us on a voyage to experience first-hand the exceptional level of skill and evolving culinary art form delivered by the masters of industry at the same time receiving an expert service level of traditional hospitality in a relaxed setting.”

CORD is set to open on Monday 30th March and can be found at 85 Fleet Street, London, EC4Y 1AE.

Following a successful Hackney residency and the launch of The Spread Eagle – London’s first 100 per cent vegan pub – founder Meriel Armitage will open Club Mexicana in Soho. Championing vegan Mexican-Californian inspired street food, the new restaurant takes inspiration from the rowdy taquerias of Los Angeles and Mexico, serving a menu of expertly-made tacos and small plates. At the heart of the open kitchen, a sizzling ‘vegan al pastor spit’ will be on display, with dishes set to include favourites such as beer battered Tofish Taco, and the Cheezeburger Taco loaded with ‘beef’ burger, red pepper queso, dill pickle, and annatto mayo. Club Mexicana will also serve nachos, tostadas and its new Queso Flameado . Club Mexicana’s much-loved burritos will also be available, including the MFC: a Mexican fried chick’n burrito packed with annatto-glazed fried chick’n, mustard mayo, pickled cabbage and hot jalapeños.

On the launch of Club Mexicana, founder Meriel Armitage said:  “We’re so excited to open our very first restaurant in the heart of Soho. We’re looking forward to doing what Club Mexicana does best – great vibes, lots of tacos and banging cocktails. We’ll be dishing up more tacos than ever before, as well as our biggest street food hits and favourite dishes. It’s going to be a lot of fun!”

Club Mexicana is set to open in March and can be found at Kingly Court, London, W1B 5PW.