Let’s face it, 2016 has been less than brilliant. Something to be thankful for, however, is the overwhelming number of remarkable restaurants to have opened in London over the past twelve months. We’ve compiled a selection of some of our favourites. Eneko at One Aldwych The first London restaurant from three Michelin-starred Eneko Atxa, Eneko […] 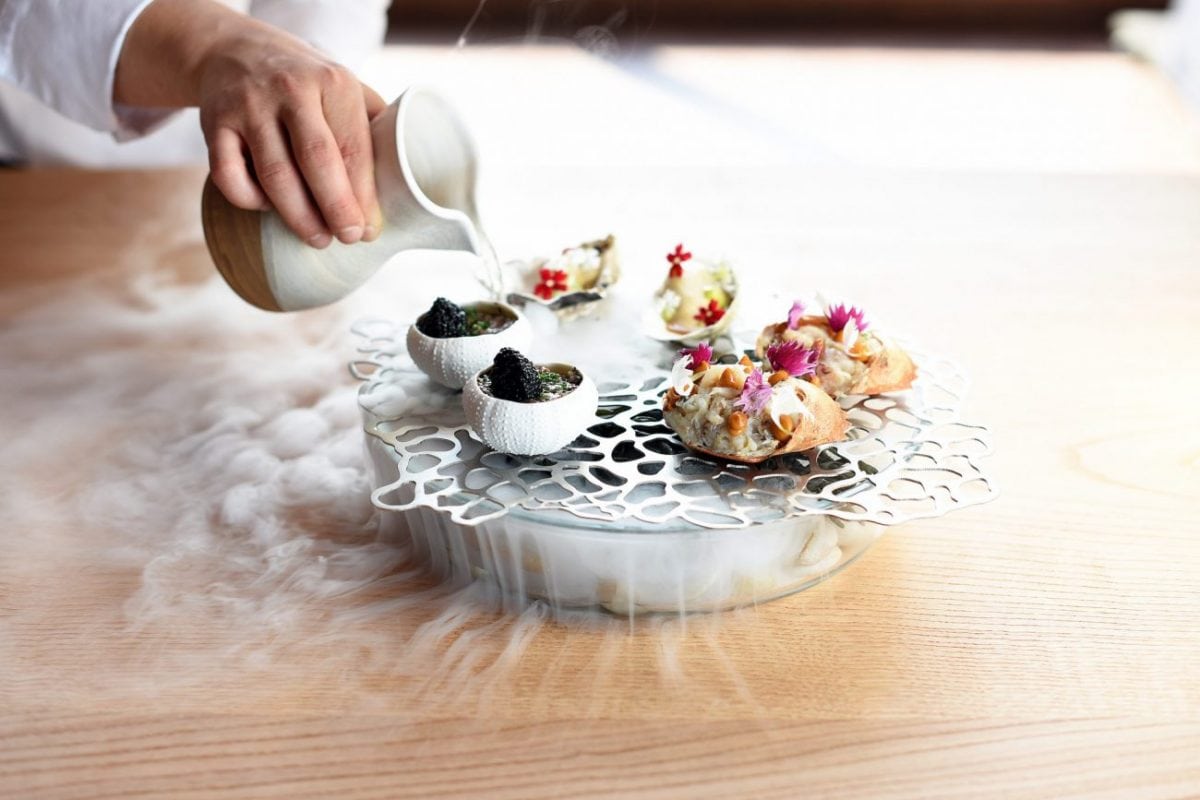 Eneko 'Memories of the Bay of Biscay'

Let’s face it, 2016 has been less than brilliant. Something to be thankful for, however, is the overwhelming number of remarkable restaurants to have opened in London over the past twelve months. We’ve compiled a selection of some of our favourites.

Eneko at One Aldwych

The first London restaurant from three Michelin-starred Eneko Atxa, Eneko at One Aldwych is an intentionally different entity to Azurmendi in Bilbao. Of course, the chef’s culinary expertise is delivered here, yet the ambience is infinitely more casual. As well as the food being generally brilliant, it is reasonably priced and the service is friendly, unstuffy and unpretentious. Begin with Bloody Mary cocktails perfectly spiced and made with juice from golden tomatoes, or indeed a glass of wine from the house of Eneko. As for the food, honourable mentions go to ‘Memories of the Bay of Biscay’ (pictured above) a seafood dish served with plenty of theatre; the ‘Txerri Boda Pork Festival’ served in a pig’s head-shaped box, with glazed sweetbread, suckling pig tempura and chorizo milk bread; as well as some of London’s most perfectly-cooked Iberico pork.

Soon after finishing as a finalist of MasterChef: The Professionals 2013, Adam Handling opened a restaurant within St Ermin’s Hotel, before being named Scottish Chef of the Year in 2015. Three years on, the chef has now opened his first solo restaurant, just a stone’s throw from brick lane. Inside, The Frog’s modest, no-thrills dining room allows the cooking to shine, without a shred of ‘style over substance’ here. At £45 the restaurant’s tasting menu offers a selection of incredibly accomplished, often boundary pushing dishes with bold flavours, many of which work very well with the optional beer pairing (mostly BrewDog) instead of wine. ‘Beer, beef, egg’ is a mound of chilli beef tartare served atop a light cracker; ‘Beetroot, beetroot, and more beetroot’ is possibly the most purple dish on offer in London, vaunting two sugar tubes piped with beetroot and yuzu gel and beetroot panna cotta before being topped with a lurid beetroot powder. The savoury cheese doughnuts, however, are by far the tastiest dish on offer here – more like Gougères than stodgy seaside doughnuts, these are filled with molten parmesan and topped with enough grated truffle and cheese to make your mouth water and arteries collapse. Opened just around the corner from the original Picture, on Great Portland Street, the new branch is an extension of sorts. Still adhering to the general ‘neighbourhood restaurant’ style with incredible front-of-house, Picture Marylebone serves an array of simply stunning dishes at some of Central London’s most reasonable prices. The six course tasting menu, for instance, at £40 includes (at the time of writing) the likes of creamy winter vegetable velouté; a thick tranche of stone bass with bitter endive, celeriac and orzo; and a block pressed pig’s head and hock that’s initially slow-cooked before being finished in a hot pan. An a la carte menu is also available, but when visiting Picture it seems unreasonable to avoid taking advantage of the tasting menu, especially when paired with expertly matched wines.

Re-opened this year with a brand new menu and direction, Vineet Bhatia has prominent focus on modern Indian-inspired cookery that pushes boundaries and excites. Open only for dinner, the restaurant’s food offering is limited to a sixteen-course tasting menu designed to send diners on a multi-sensory culinary excursion (so book an early dinner sitting, if possible). Showcasing the chef’s cooking skills and expertise, dishes from the tasting menu include rich pao bhaji, a sweet brioche-like bun filled with potato, joined by a subtly spiced round of bhaji butter; mushroom momo – mushroom-filled fried dumpling served on an intentionally broken plate; Vineet Bhatia’s classic tandoori-smoked salmon with a spiced dill marinade; and a Kapi lamb chop with coffee and sweet jaggery. Set up by three friends and launched earlier this year, Brother Marcus is stylised as a “garden café”, sandwiched between a taxi rank and a branch of Dirty Burger, just seconds from Balham tube station. Like many of the cafes that line the streets of Shoreditch, Stoke Newington and Dalston, the décor is on-trend yet humble and understated, while brunch is served daily. With plenty of attention on organic, seasonal and quality produce, there’s also a strong emphasis on coffee, favouring social and environmentally friendly Caravan green coffee. Brewed for 16 hours, filtered twice and served over ice with a slice of lemon, the menu’s BM cold brew, for instance, is remarkably heady. From the brunch menu, highlights include the ‘Brother Special’ – a thick wedge of toasted sourdough topped with smoked salmon, al dente asparagus, chilli flakes and scrambled eggs the colour of a tropic sunset, sourced from a farm in St. Ives. The colouring is due to trace addition of paprika to the hen’s diet, juxtaposed to the artificial dyes often used. Elsewhere, the café’s French toast combines rich flavours of sweet cinnamon and egg-soaked bread with fresh blueberries, strawberries and raspberries, all bathing in a pool of maple syrup. Since opening a 25-cover restaurant on the corner of Hoxton Square earlier this year, there’s one dish in particular at Petit Pois Bistro that has been causing waves of excitement across the city. Scooped from a mixing bowl, the chocolate mousse is topped with bitter cocoa powder to counteract the ludicrously sweet base that’s light, impossibly smooth and resembles raw chocolate cake mixture (a good thing, obviously). Elsewhere, Petit Pois showcases the sort of classic French cooking seldom seen within UK restaurants. Humble French classics include the likes of steak frites – favouring a cut of flat iron instead of traditional rump or entrecôte, served with skin-on fries and tarragon-heavy béarnaise sauce; wispy blue cheese soufflé with wild garlic; and crisp confit duck leg with gratin dauphinoise. Just don’t forget to save room for dessert. With two successful restaurants already open in London (Rabbit and The Shed) the Gladwin Bros opened Nutbourne in Battersea earlier this year. On the sight of Ransome’s Dock, Nutbourne has an atmosphere that’s not dissimilar to a traditional country pub in the middle of nowhere. Floor to ceiling conservatory windows allow natural light to flood the room, while plant pots, parachuting vegetables and leafy carrots hanging from the ceiling beams lend a kitsch touch to the space. Breakfast is served until noon on weekdays, or until 5pm on weekends, whereas the main menu features the likes of ‘Mushroom Marmite’- a paste formed from both ingredients, served with crackers; strips of grouse served on a hot slab of Himalayan rock salt; autumnal pumpkin gnocchi with spring onion and roasted pumpkin seeds; while various steaks join a number of tried and tested classics (ox liver, lamb leg, beef tartare). Before visiting, Oliver Maki is somewhat difficult to fall in love with. Not only does the restaurant substitute menus for iPads loaded with pictures of dishes on offer, all of the sushi here is made with super-healthy brown rice instead of traditionally sweet glutinous rice. Already popular in the Middle East with four restaurants in Kuwait and one in Bahrain – Oliver Maki does not, however, pretend to serve traditional Japanese food. Instead, the contemporary menu has Japanese foundations modified with various global influences. And although not for purists, the food here is generally very good. ‘Prawn Shot’ is literally a crispy rice noodle-coated prawn served in a shot glass with tiny pickled plums from Japan; ‘Mount Fiji’ is a surprisingly pleasant selection of maki rolls topped with rich foie gras and heavily smoked eel. Signature dish ‘Oliver Maki’, on the other hand, is stylised as a tasting menu on one plate with a selection of eight different maki rolls, made using over 30 ingredients. Each contemporary maki roll on the plate boasts a different topping, be it kizami wasabi, pico de gallo, or chilli mustard – designed as a culinary journey. To finish, alongside A Wong’s salted duck egg custard buns, the tiramisu presented under a terrarium-like dome is one of London’s most Instagram-friendly desserts. Just one of the area’s many new restaurants, Galley arrived in Islington at the start of this year. Opened by brother and sister team chef Marcel Grzyb and designer Oriona Robb, Galley is an extension of sorts to Grzyb’s work at Randall & Aubin, with an expertise in fish cookery presented with pride. As expected from the restaurant’s name, the menu is deeply rooted in produce from the sea, with the likes of tempura oysters accompanied by soy dressing to revive some of the salinity lost in the fryer; and marvellously tender grilled octopus with oily chorizo and a smoked garlic pesto. Alternatively, a tranche of snow white halibut is soft from the water bath and contrasted with a shard of crispy skin, yet it’s the lobster pappardelle with its hearty broth that stood out against the other mains on offer during our visit. Having trained under renowned French chef Pierre Koffmann, Ben Murphy opened his first solo restaurant this year, choosing a space in South Woodford to serve his take on Modern British cuisine. Inside, the restaurant is spacious and luxuriously decorated while most of the dinner guests during our visit made it very difficult to forget the proximity to the border of Essex. The food, though, is generally wonderful. A dish of superbly-cooked octopus is joined by a tunnel-boned, breaded confit chicken wing and oily chorizo, while the pigeon wellington features pink meat wrapped with flaky puff pastry with foie gras. A main of grouse, on the other hand, is very classic and refined with pink breast meat and a sharp berry sauce. To finish, a rice pudding soufflé is perfectly formed, well-risen and has all the delicious taste of rice pudding, yet without the less than pleasant texture. This is the sort of food that’s worth leaving Zone 2 for.