By Jack Peat, TLE Editor A taste for more artisanal and authentic produce has given birth to a ‘source market’ in London where produce is both made and prepared in house. The movement is a natural evolution of a gastro drive which has seen demand for locally sourced produce shoot up as punters seek a […] 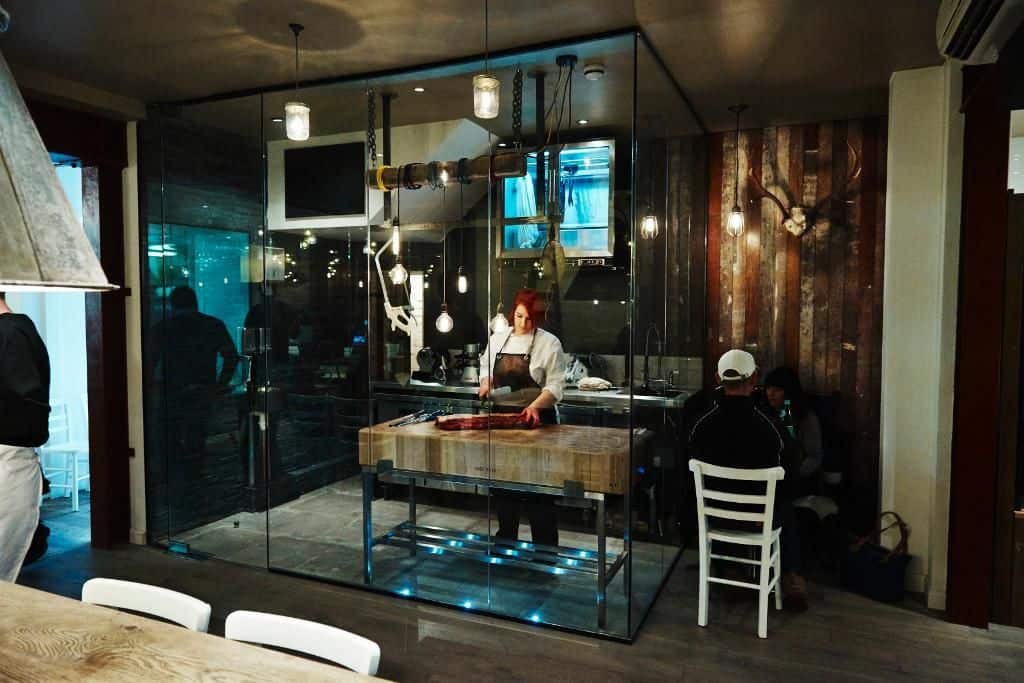 A taste for more artisanal and authentic produce has given birth to a ‘source market’ in London where produce is both made and prepared in house.

The movement is a natural evolution of a gastro drive which has seen demand for locally sourced produce shoot up as punters seek a seal of authenticity which is often local in nature. The craft/ real ale surge is a manifestation of this. Camden Pale Ale, Meantime Brewery and the plethora of locally sourced cask ale now available in most London pubs is testament to a wider call for produce that can be traced, a stark shift away from a mass centralisation of food and drink which for some time had engulfed the nation.

Now London, ever the trendsetter, is in the midst of a source market revolution, personifying the artisan brand by bringing it in-house. Breweries nestled in pubs, coffee roasters housed in cafes, butchers operating within restaurants; made and displayed looks set to grip the capital. The Aeronaut is a bar/ brewery venture that lies on the border between Acton and Ealing. Featuring cabaret acrobats and circus performers on Fridays, Bottomless Bloody Marys for brunch on Saturday and sharing platters of roast meats on a Sunday the pub offers a compelling case to cocoon yourself in the same place for the duration of the weekend.

If that is not enough then there is also the matter of the onsite brewery which is one of three operated in London by the Laine Brewing Company. The five brewer’s barrel brewery can knock out 1,440 pints a go with new brews always on the horizon, with inspiration coming from new world styles as well as historic East London brews for which the city is famed.

After fermentation the beers are cask conditioned before being dispensed through the hand pumps that litter the pub’s long bar, guaranteeing every pint is fresh every time. East London was once a gin powerhouse, home to many of the brands we see stocked on supermarket shelves today. Most of them have long since vacated the area, but a nascent revival is underway with new distilleries reviving the once (not so) proud industry.

One such distillery is the East London Liquor Company which produces a range of quality handcrafted spirits including gin, vodka, rum and whisky. Returning spirits production back to the East End the bar come distillery is located in the historical old glue factory in Bow Wharf where they serve up a range of cocktails using their signature spirits. Brew Café in Putney is the latest and largest addition to the Brew chain adding a restaurant dimension to the traditional café vibe in Wandsworth, Battersea and Wimbledon. Run by Jason Wells, who began his career as a butcher in his native Australia, the Putney chain has an in-house butcher shop complete with dry aging fridge where you can get cut-to-size and cook-to-order steaks.

Along with the delicious selection of home-cut meats the café offers quality coffee and all-day dining. It grabbed the headlines when it first opened by offering a ‘breakfast in bed’ service whereby punters can recline on a Bedouin inspired bed and lie out on the terrace under the shade of a 150 year old olive tree while enjoying poached Turkish eggs served with hung yoghurt and hot chilli butter. There are several pizza places that house a wood burning pizza oven, but very few offer a dining experience like Homeslice. Based in Neal’s Yard the company began with a hand-built wood fire oven serving pizzas in the courtyard of an East London brewery. In their new permanent residence the restaurant continues to offer seasonal produce on their distinctive signature dough which has been refined and perfected over the years.

The standard pizza is 20 inches which can be divided in half to ensure you get to taste the best the menu has to offer. Along with a selection of traditional pizza toppings Homeslice offer a selection of gourmet alternatives such as ‘Goat Shoulder with Red Kale and Sulmac Yoghurt’ and ‘Butternut Squash with Blue Cheese, Watercress and Crispy Onion’. Wine is served by the magnum and charged using a yard stick at the end of the meal. There is also Camden ale and prosecco on tap. Delightful! Voted Best Independent Cafe Europe (Allegra Symposium), Best Vegetarian Breakfast (Observer Food Monthly) and ‘Best Independent Cafe’ at the 2012 Cafe Society Awards, Workshop Coffee Co is making big waves in the London coffee scene. Their Clerkenweel Road outfit houses two grinders at the back of the store, one offering Workshop’s standard Cult of Done espresso and the other is used for seasonal blends. Piles of bean bags (of the coffee variety) are littered around the floor offering up the whole experience from bean to cup.