A leading authority on the edible wild fungi of Northern Europe, Geoff Dann published a comprehensive book on the subject – ‘Edible Mushrooms’ – in 2016 (through Green Books). Tying in with next month’s launch of a new Hardback edition, we asked Geoff to share some of his knowledge; describing five wild mushrooms you should […]

A leading authority on the edible wild fungi of Northern Europe, Geoff Dann published a comprehensive book on the subject – ‘Edible Mushrooms’ – in 2016 (through Green Books). Tying in with next month’s launch of a new Hardback edition, we asked Geoff to share some of his knowledge; describing five wild mushrooms you should never eat.

Everybody knows there are seriously poisonous mushrooms lurking in the British countryside, but the gruesome details of their varying types of toxicity are more of a mystery. This article covers just five of the worst offenders.

This fungus is responsible for almost every fatality-by-fungus in Britain [photographed above], in the era of modern medicine. It has earned this dubious honour not because it is the most toxic – for several other species contain the same (or very similar) toxins, some in equal or greater concentrations – but because of that handful of exceptionally poisonous species, it is both the most common and the easiest to confuse with popular edible species.

The most damaging of these toxins is called α-amanitin, and it is an RNA transcription inhibitor. That is, it sabotages our basic genetic biochemistry by blocking the mechanism by which DNA in the cell nucleus directs the cell to create proteins. To make matters worse, α-amanitin tends to focus its attention on cells in the liver and kidneys – the very organs we depend upon to break down or remove toxins, respectively. Even worse still, the mechanism by which kidneys remove toxins is very inefficient for α-amanitin – kidneys work by taking almost everything out of our bloodstream and then re-absorbing anything useful, but unfortunately they also re-absorb α-amanitin, so it just keeps going round and round the system, doing its deadly work.

One Deathcap is more than enough to kill an adult human, by kidney and/or liver failure within a week (although cruelly, there is a period after a few days, when the initial severe gastric symptoms subside and the victim is fooled into believing they are recovering). There is no antidote, and any chance of survival depends on early diagnosis, massive blood transfusions, dialysis and eventually organ transplants. There may be some hope of a new treatment on the horizon though: researchers in the United States are working on a method using a compound extracted from Milk Thistle, which is capable of temporarily protecting the liver from long-term damage, buying enough time for the kidneys to remove the toxins providing the patient is aggressively hydrated. Still, the best option is not to eat any Deathcaps in the first place.

This species can be recognised by its grey-green cap (although there is a pure white form), a persistent, floppy ring around the stem, white gills that stay white, and a large sac at the base of the stem (called a “volva”). They are symbiotic with various trees, typically oak, and usually appear in late summer and early autumn. The edible species they are most frequently mistaken for are Agaricus species (the wild relatives of the familiar cultivated mushroom), although other mistakes have been made. There are also a number of other extremely poisonous Amanita species, most notable of which is the Destroying Angel (A. virosa), which is quite similar, apart from being pure, brilliant white, more likely to be found with conifers, and more common in the northern half of the British Isles.

Coming in as a close second to Amanita as the world’s most dangerous group of poisonous fungi is the genus Cortinarius, commonly known as “webcaps”, after the fibrous veil that protects the developing gills. Cortinarius is notorious among mycologists for another reason too: it is by far the largest genus of mushrooms (thousands of species), and many are both rare and difficult to identify. A significant proportion are also toxic (and none are widely eaten) but two closely-related species are particularly noteworthy: the Deadly and Fool’s Webcaps.

The exact mechanism remains unclear, but the toxin responsible (orellanine) is chemically similar to the weedkiller paraquat, causing kidney failure over a period of a few days to a few weeks. These species are harder to confuse with popular edible species, but it regularly happens anyway. In one recent high-profile case, author of The Horse Whisperer Nicholas Evans managed to mistake them for an edible Penny Bun (or Cep/Porcino, Boletus edulis), even though the latter is a completely unrelated mushroom with pores instead of gills (a perfect example of how wishful thinking can lead people to make mistakes you would expect to be almost impossible). He and his wife both ended up in need of kidney transplants, but have now made a full recovery.

Cortinarius species aren’t the easiest to identify even to species level. When young, their web-like “cortina” (meaning “curtain”) gives them away, but older specimens can be much harder. All are symbiotic with trees, with characteristic rust-brown gills (when mature), which are usually widely spaced. They have a sort of general “look” about them that only becomes familiar with experience. 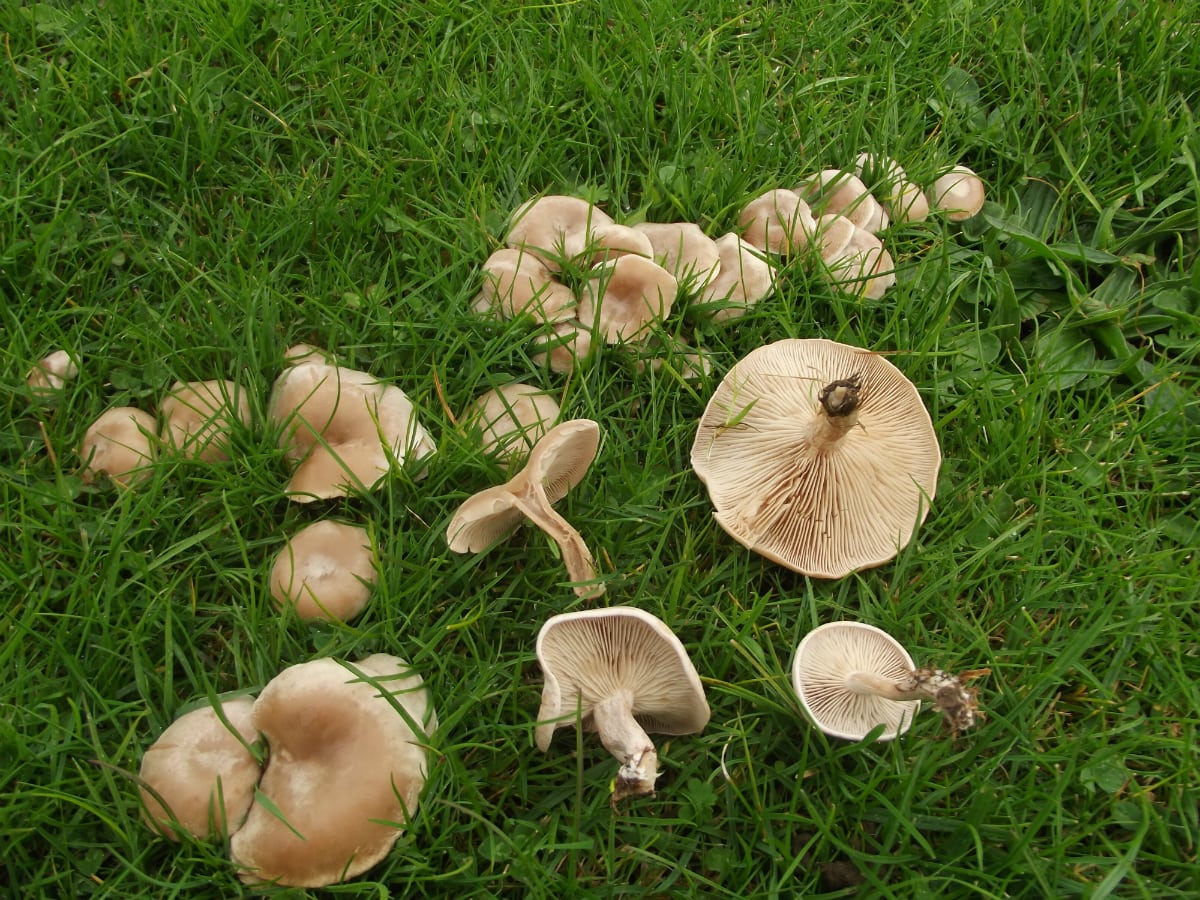 While the most dangerous poisonous mushrooms kill people over a few days by liver and kidney failure, there’s another category of killers that are almost as bad, their only redeeming feature being that if you recover from the initial effects, there isn’t usually any lasting damage. These fungi contain a toxin called muscarine, which was originally isolated from the very famous mushroom with a bright red cap and white spots (the Fly Agaric (Amanita muscaria)).

Muscarine, in high doses, causes death by cardio-vascular failure within hours of consumption. There is an antidote, and oddly enough it is another botanical poison: atropine, which is found in the berries of Deadly Nightshade. Though Fly Agarics are the most famous muscarine-containing mushrooms, several other species contain much higher concentrations. Of these, the Deadly Fibrecap (Inocybe erubescens) is probably the worst, but it is an uncommon woodland species that usually fruits in spring and summer (rather than the peak mushroom season of the autumn), and has more frequently been responsible for canine, rather than human, poisonings.

The same cannot be said of Fool’s Funnel (and also Ivory Funnel (C. dealbata), which is a very close relative or subspecies). While this species contains a lower dose of muscarine than the fibrecap, its preferred habitat and growth habit puts it on a collision course with both foolish foragers and small children. It’s a grassland species, and typically turns up on roadside verges, grassy areas in parks and cemeteries, and people’s lawns. Just growing on lawns is enough to make it a hazard for inquisitive children, but it also usually grows in rings, and for this reason it is frequently mistaken for a good edible grassland mushroom that is named after this growth habit: the Fairy Ring Champignon (Marasmius oreades). 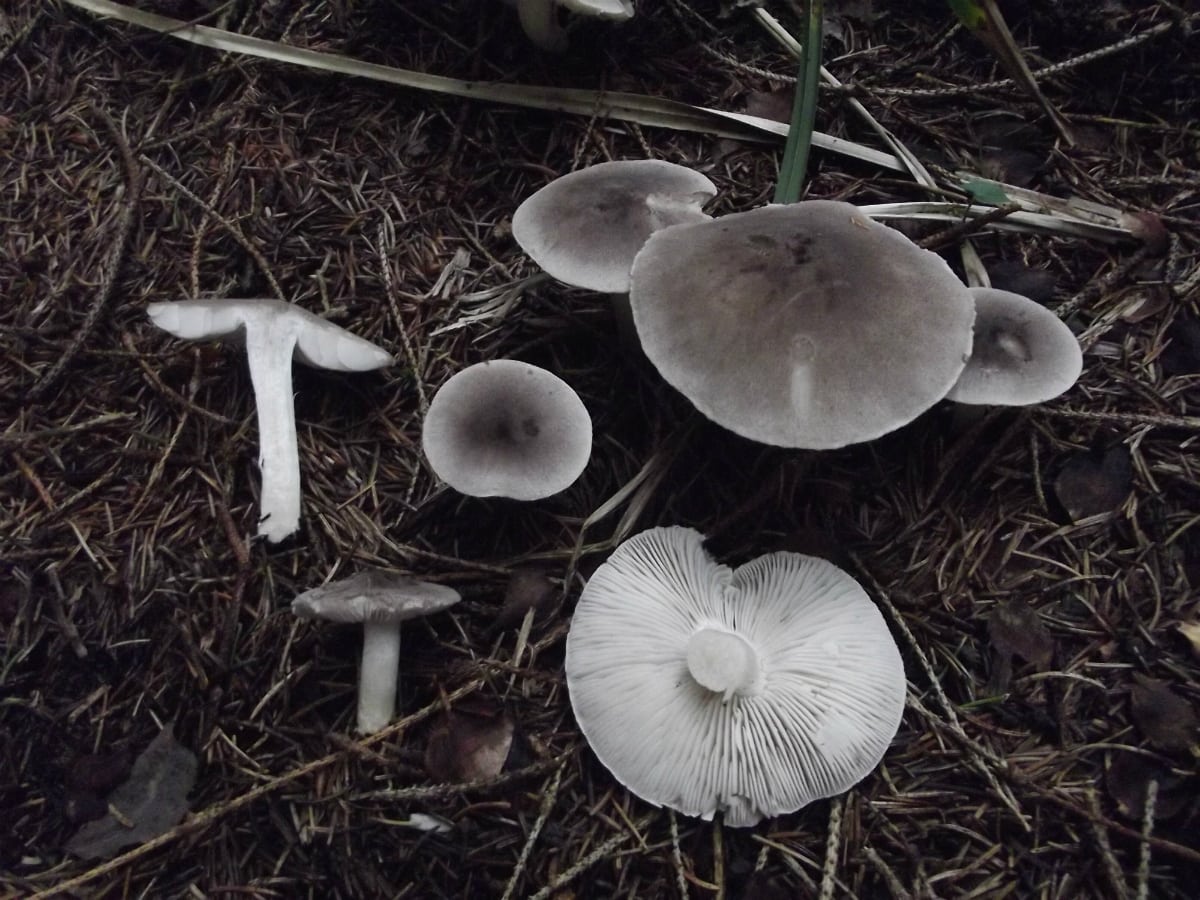 The last two members of our fatal fivesome demonstrate the dangers of relying on traditional knowledge, even if you’ve correctly identified a mushroom. Both have been traditionally considered good edible species, but are now known to have been responsible for multiple deaths.

Tricholoma is tricky genus for foragers. It contains one of the most highly regarded wild mushrooms of all – the Matsutake (T. nauseosum syn. matsutake) – as well as numerous other good edible species, along with a large number which have long been known to be inedible or poisonous (but not lethal). Accurate identification is often tough, and two European species have recently fallen from grace. The most famous of these is the Yellow Knight or “Man on Horseback” (T. equestre), but since this is the least common of the pair in Britain, and since the toxicology is not yet complete, it’s the other I will describe (almost certainly the mechanism and toxins are the same or very similar).

Poisoning by Grey Knight only occurs in individuals who have eaten them several times within the space of a fortnight, but when it does occur it is devastating. Chinese researchers have now isolated the two compounds responsible, which apparently work together to cause a condition called “rhabdomyolisis”, which is a rapid breakdown of skeletal muscle tissue which contaminates the bloodstream with a storm of toxins – too much for the body to cope with, leading to kidney failure in extreme cases. 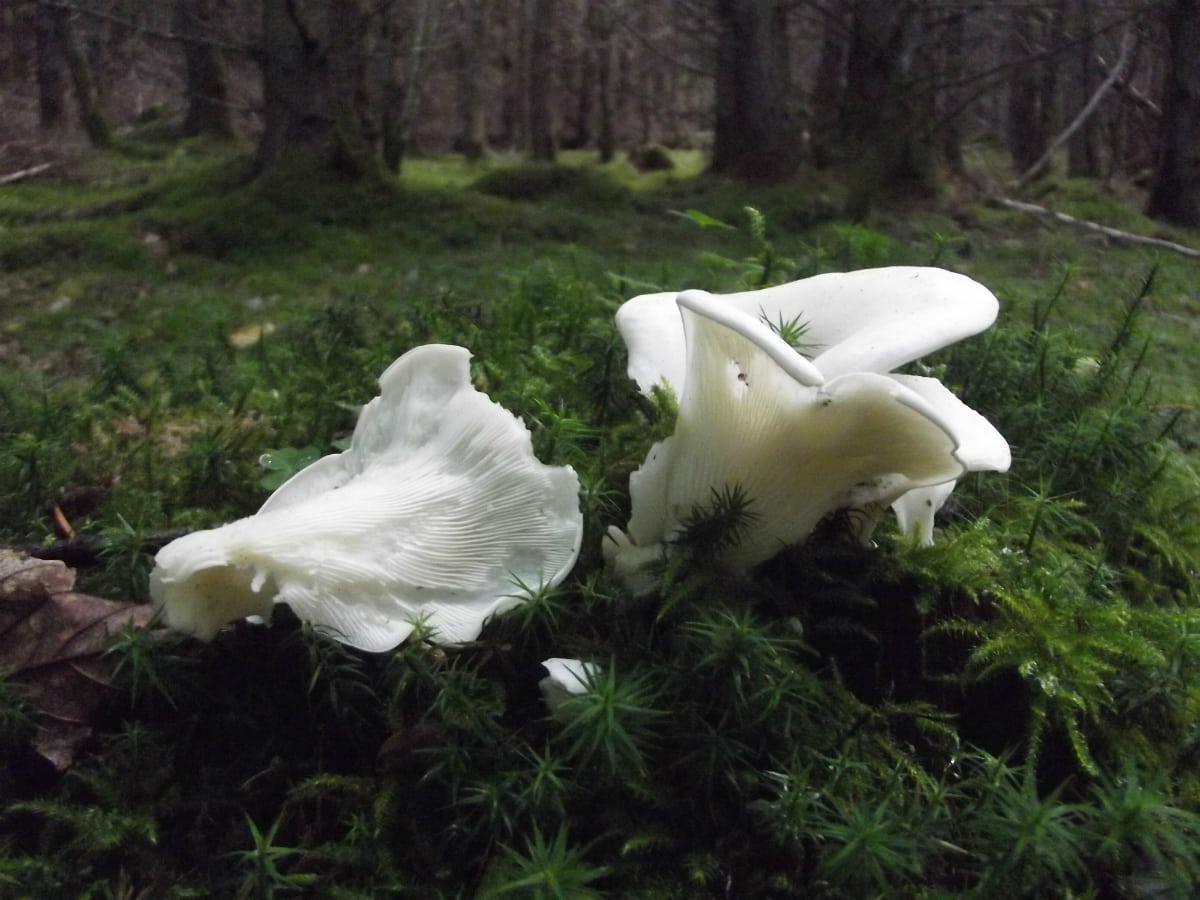 This is perhaps the scariest of them all. Angel’s Wings are a beautiful fungus, looking rather like a pure white, rather delicate version of Oyster Mushrooms (Pleurotus ostreatus). They are common in northern latitudes, and while not yet present in my native southern England they are reportedly heading this way. They are widely described as edible, in books still in print and on web pages still online. Only one problem with them: they are known to have caused hundreds of cases of serious brain injury, including multiple fatalities.

This time the toxicology was done in Japan, which is the country where most of the recent poisonings occurred. These poisonings occurred in batches, at times when this species was fruiting abundantly, so much was available consumption. All of the victims had pre-existing kidney conditions (although some were unaware of this). It turns out that Angel’s Wings contain a chemical, now known as “pleurocybellaziridine ”, which is an amino acid precursor. That is, it is a chemical that can react with other chemicals in the body to produce amino acids, and in this case the amino acids it produces are “novel” – they do not normally exist in human bodies. And it seems that when people with poor kidney function consume large amounts of pleurocybellaziridine it can reach their brain, and there it produces these novel amino acids, and the amino acids wreak terrible damage to brain tissue.

Some sources play down the risk, and insist these fungi are still safe to eat, so long as you don’t eat that much of them and your kidneys are functioning at 100 per cent. Personally, I wouldn’t take the risk.

There are indeed some dangerous fungi out there. However, this is a case of needing to your enemy, and then you are relatively safe. Provided you are able to recognise the relatively small number of seriously dangerous mushrooms; you are very unlikely to come to serious harm. There are hundreds of edible species, and if you are willing to take your time, pay attention and not do anything reckless, you will be fine. One final word of warning though: be very wary of people on the internet who identify mushrooms for you. Some of them aren’t nearly as capable as they’d like people to think they are. If you are planning on eating something, the only way to stay safe is to learn how to identify it yourself (or go foraging with an expert, of course).

Geoff Dann lives in Hastings and also runs foraging courses in Kent. Further information can be found at geoffdann.co.uk. Edible Mushrooms, Hardcover, by Geoff Dan will be published on Friday 1st June, available from amazon.co.uk.