A woman has taken on Britain’s biggest sausage roll – measuring a massive 3FT and so big it needs to be served on a FENCE POST. Famous challenge eater – the aptly named Kate Ovens managed to polish off most of the giant snack in just TEN minutes. But the 23-year-old feared she had met […]

A woman has taken on Britain’s biggest sausage roll – measuring a massive 3FT and so big it needs to be served on a FENCE POST.

Famous challenge eater – the aptly named Kate Ovens managed to polish off most of the giant snack in just TEN minutes.

But the 23-year-old feared she had met her match with the 3750-calorie snack – because she hit ‘the wall’ with less than six inches of the meaty treat left.

The 5ft 5ins eating machine went for a tactical walk for about ten minutes in a bid to free up some more room.

She then took the final bite around 50 minutes after starting the challenge.

Kate, from Kennington, south London, took on the huge meaty challenge, which is thought to be the biggest sausage roll in the country, at The Red Lion pub in Barnes, south west London, on Tuesday.

The massive roll was created for the Fuller’s Great Sausage Roll Off, which is in its sixth year, which Kate judged for the first time.

She said: “I was so hungry before the challenge, and I got to see them make it in the kitchen which made me even hungrier.

“When it came out of the kitchen served on that fence post, my jaw just dropped.

“I thought that I’d bitten off more than I could chew.

“It was absolutely delicious though and absolutely packed with flavour.

“The first two-and-a-half feet slid down a dream.

“But unfortunately then I hit the wall.

“I didn’t want to throw in the towel, so I went for a bit of a walk.

“That helped me free up a bit more room and I came back and managed to finish it.

“Of all my challenges, this is the one that probably took the longest from start to finish, but I was determined to polish it off.”

The meaty treat, which contains 800g of pork and black pudding, and 400g of pastry, is more than seven times longer than a five-inch Gregg’s sausage roll, and was far thicker.

It weighed a whopping 3 lbs, and was so lengthy it had to be served on a wooden fence post – because they don’t have platters long enough.

“It was definitely the tastiest sausage roll I’ve ever eaten – and the thickest.

“It was probably thicker than my arm.”

Red Lion general manager Angus McKean said: “Kate does this for a living and it was great to work with her on this challenge.

“She took it very seriously and professionally.” 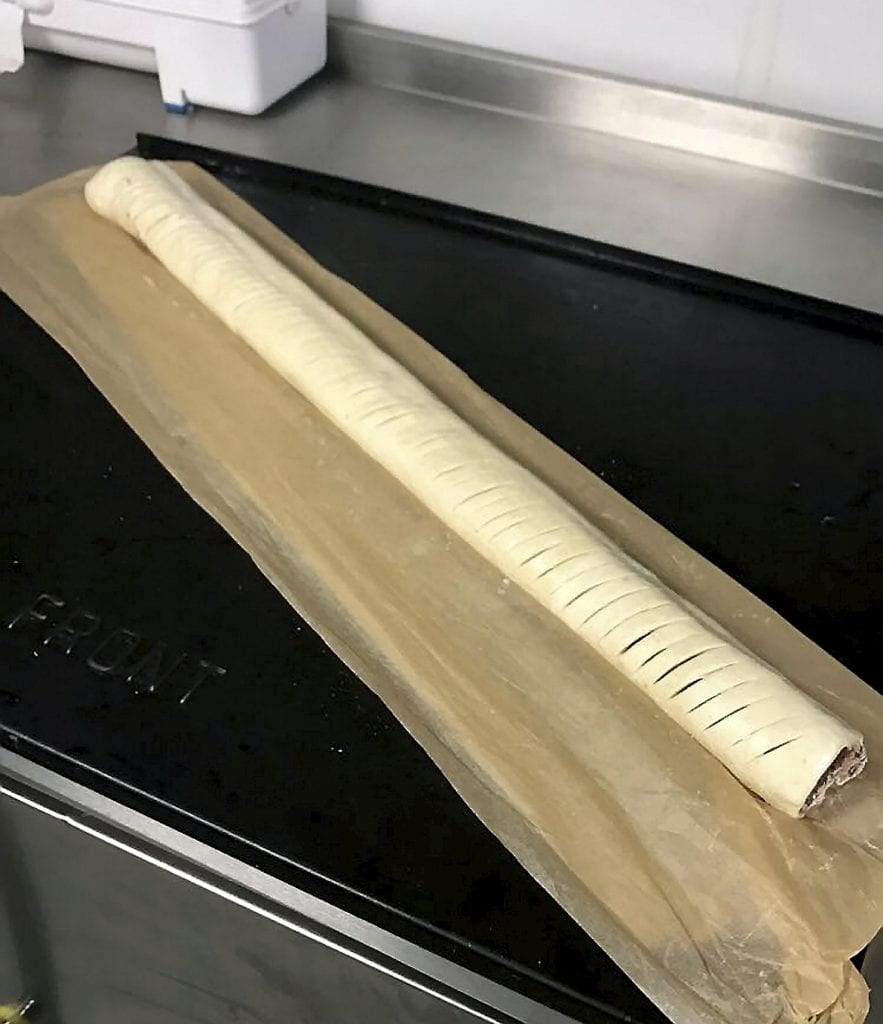 Kate has more than 100,000 subscribers on her ‘Kate Ovens’ Facebook page and her eating challenges videos regularly rack-up hundreds of thousands of views.

In this challenge, she managed to polish off the first 30 inches of the giant snack at a speed of 0.003mph.

Kate added: “It’s definitely not put me off sausage rolls.

“The next day I was straight back in the game and the next day I had to judge 16 different rolls for the competition.

“And like all the best foods, it was measured in feet.

“People kept coming up and asking for a bit, and I was like ‘no, this is mine’.

“Afterwards I felt like being rolled out of the pub.”

Posted by The London Economic – Food on Wednesday, 31 January 2018