By Jonathan Hatchman, Food Editor, @TLE_Food We’ve already discussed the soaring popularity of cocktails being celebrated within some of the Capital’s finest restaurants, providing a refreshing change from the more classic dinner accompaniment of Wine. However, although the restaurant scene is jumping on board, it’s London’s exclusive Bars that are still reigning over the city’s […] 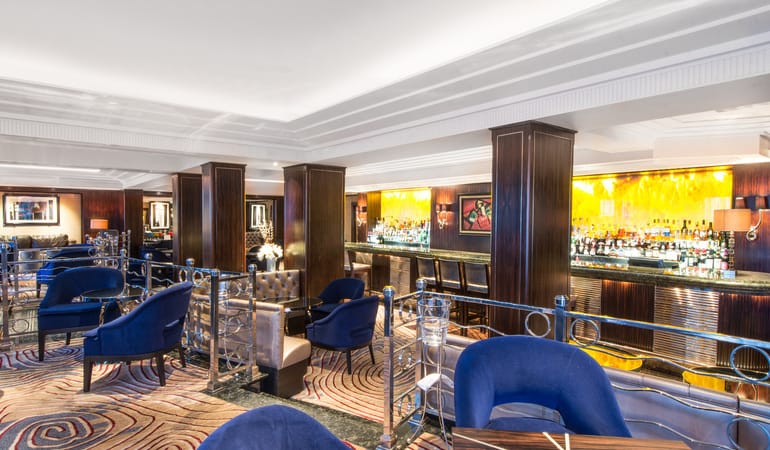 We’ve already discussed the soaring popularity of cocktails being celebrated within some of the Capital’s finest restaurants, providing a refreshing change from the more classic dinner accompaniment of Wine. However, although the restaurant scene is jumping on board, it’s London’s exclusive Bars that are still reigning over the city’s cosmopolitan drinking scene. And one of these Cocktail Bars that has been generally renowned as one of London’s finest haunts is The Polo Bar, which is situated within The Westbury Hotel, on the corner of Mayfair’s trendy Conduit Street.

Having opened its doors back in 1955, set up by the Phipps family, who were notable Polo players, it’s no surprise that as well as having 246 bedrooms (20 of which are luxurious suites), and three restaurants, there’s also a Polo Bar. It’s the sort of place where you’ll end up spending three-figure sums, at least, on an enjoyable drinking experience, joined by some of the Globe’s most notable A-list celebrities, one of whom was seated at the table opposite ours while drinking a coffee during which looked like an interview. I won’t disclose too much information, but the sliver screen sleuth in question has been constantly regarded as one of the best living actors of all time, and he’s played leading roles in some of the best crime movies of all time.

As for the new Spring menu, there’s plenty of decadent Bar food, the Caviar selection is impressive (£450 for 50g of Beluga), joined by a vast selection of Salads and Sandwiches, but tonight is all about the extensive drinks menu before we head next door for dinner at Brasserie Chavot. Boasting a colossal range of Wines, Champagnes, Beers and Spirits, ranging from £7.50 Beers, Bottles of Wine that start at £38 and work their way well into the hundreds, Spirit measures cost between the £10 mark up to £500 per 50ml. Meanwhile, the impressive selection of Champagne commences at £16 for a glass of Moët & Chandon Brut Imperial, while a bottle of the same for £69 is the menu’s most affordable bottle of bubbles, leading up to six litres of Dom Perignon Rose Gold Methuselem (1996), which will set you back a staggering £35,000.

On to the extensive cocktail list, a Gin and Tonic promotion is currently available, but it’s the Polo Signature Cocktails that excite us the most: the ‘Mayfair Gold’ and ‘Pomegranate Deluxe’, in particular. Each priced at £18.50, the former comprises a mix of Tanqueray Gin that’s shaken with fresh Lychees and Elderflower, while the latter fuses Bombay Sapphire Gin that’s also shaken with Elderflower, but substituting Lychees for Lemon and Pomegranate juice, before both being topped with a splash of Moët & Chandon (Brut Rosé for the ‘Mayfair Gold’ and Brut for the ‘Pomegranate Deluxe’). Compared to some of the City’s competing Cocktail Bars, the presentation isn’t exactly sensational, however the taste makes up for what’s lacked in the visual department, also served alongside a selection of tasty snacks which seem to be unnecessarily replenished every five minutes, with a selection of Olives and some deliciously seasoned Almonds.

Another honourable mention goes to the Marzipan tasting ‘Sweet Almond’ (£15.50) with Amaretto, Strawberry-infused Port, Lemon and Sugar, which gives the customer the choice of Egg white inclusion or not, while the ‘Greta Garbo’ (£15.50) marks the most deliciously refreshing cocktail of our visit. Teaming Appleton VX Rum with maraschino liquor, lime and a splash of intoxicating Pernod, topped with some Star Anise to complement the Pernod.

As you’d expect from a swanky Mayfair hotel, the menu is rather pricey, yet the Polo Bar provides a wonderful environment to splash some cash and enjoy some pre-dinner drinks or late-night tipples, where you’re likely to even be joined by some famous faces enjoying one the hotel’s gems on offer.