By Jonathan Hatchman, Food Editor, @TLE_Food Widely renowned as the oldest surviving cocktail bar in England – as well as being one of the finest – The American Bar at The Savoy is particularly steeped in British history. First opened in 1893, four years after the initial opening of it’s iconic location – Britain’s first […] 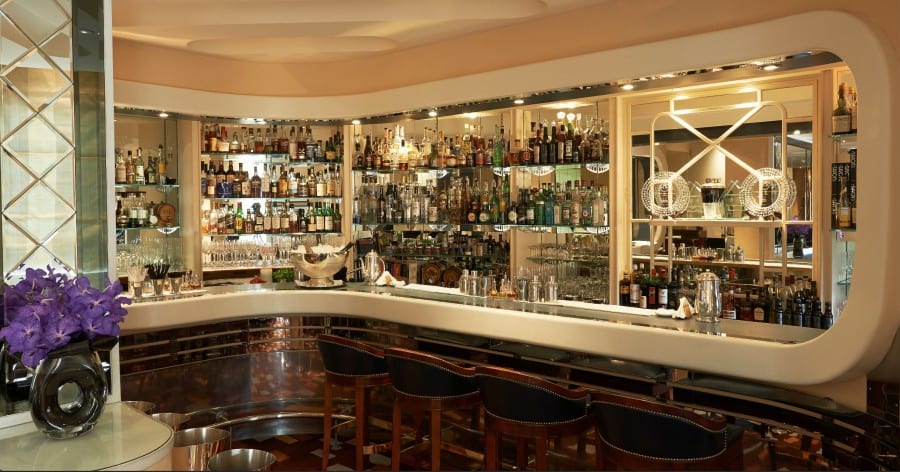 Widely renowned as the oldest surviving cocktail bar in England – as well as being one of the finest – The American Bar at The Savoy is particularly steeped in British history. First opened in 1893, four years after the initial opening of it’s iconic location – Britain’s first luxury hotel – The American Bar was originally located in the riverside part of the hotel, before an extension made space for the wing on The Strand in 1904, the bar’s current home, from where the accomplished team continue to serve a range of drinks. The key focus here, however, is on the cocktails.

If we’d managed to visit The American Bar a number of decades ago, we may have expected to join the likes of Oscar Wilde supping on a chalice of absinthe, or indeed Frank Sinatra nursing a tumbler of Jack Daniels after performing within the city. Instead, we’re joined by a different eclectic crowd. Whether it’s a number of dressed up pre-theatre goers enjoying a drink in the World famous surroundings, heavily suited businessmen having escaped work early, and young men (not rappers or Premiership footballers) dressed in trainers and oversized tracksuit bottoms. You may also spy massively acclaimed head bartender Erik Lorincz alongside the rest of the staff, looking as though having been plucked from the set of a 1920s period drama. Tying in with the understated glamour of the décor, with a baby grand piano almost as much of an internal feature as the bar. Seated at a corner table it does feel as though an insurmountable amount of unnecessary seating has been sourced in order to ensure that the capacity is high enough to meet severe demand, and that guests are practically forced to invade each other’s personal space.

Honouring the history that surrounds the hotel, the new bar menu is inspired by seven of London’s boroughs, with four carefully compiled drinks for each. During our visit we managed to sample one from each, except for ‘Tower Hamlets’ and the vintage ‘Greenwich’ cocktails that range from £100-5000. Unsurprisingly, one of Lorincz’s signature pours, a take on the bar’s classic ‘Green Park’ is available from the ‘Westminster’ page, comprising Jensen’s Old Tom gin, lemon juice, sugar syrup, celery bitters, egg white and basil. Also from the ‘Westminster’ section is the ‘Policeman’s Hook’ (£25) served in a Tiki-like cup atop an artificial lawn. Fusing Haig Club grain whisky with Amontillado sherry, roasted fortified kombu (a type of edible kelp), barley syrup, and Angostura bitters – the blend of flavours works in perfect harmony, although the Haig Club whisky is underwhelming in terms of taste. That’s no fault of the bar, but given the price of the drink, would one of the hundreds of more exciting whiskies on the market be too much to ask?

‘Hackney Carriage’’s (£18) use of spirit was far more exciting, favouring Diplomatico Reserva Exclusiva rum that’s served with Umeshu (a Japanese liqueur), dry vermouth, Laphroaig whisky, sugar syrup and Peychaud’s bitters for a perfect after-dinner drink with a warming alcoholic kick. ‘Pharmacist’ (£18) from the ‘City of London’ section was also impressive, with all of the ingredients (Barolo Chinato, suze, grenadine, absinthe, dehydrated raspberries) apart from the Bulleit rye whisky – strictly speaking – having been used medicinally at some point in time. ‘Camden’’s ‘Abbey Road’ (£18) comes with no prizes for guessing the inspiration, combining Star of Bombay gin with sharp, refreshing yuzu, and lemon juice, served in a couple adorned in citrus dust that’s as sticky as it is attractive.

Although drinks at The American Bar are certainly not cheap, the prices are as expected, if not slightly more reasonable than most five-star hotel bars, and for the experience and prestige alone, the bar is a must-visit for anybody in search of some yesteryear elegance. While booking is impossible, be sure to aim for one of the few stools at the bar and arrive in the evening when the piano will most likely be accompanied by a pianist, the pre-theatre rush would have passed, and the atmosphere is just as typical as expected from this type of space.

The American Bar can be found at The Savoy Hotel, Strand, London, WC2R 0EU.