RelatedPosts Film Review: Ropes James Bond star Sir Sean Connery dies Film Review: Shirley Film Review: Mogul Mowgli By Linda Marric When it comes to films about people doing heroic deeds during WWII, it becomes impossible to review the film without taking into account the real people behind these truly harrowing stories. Based on a […] 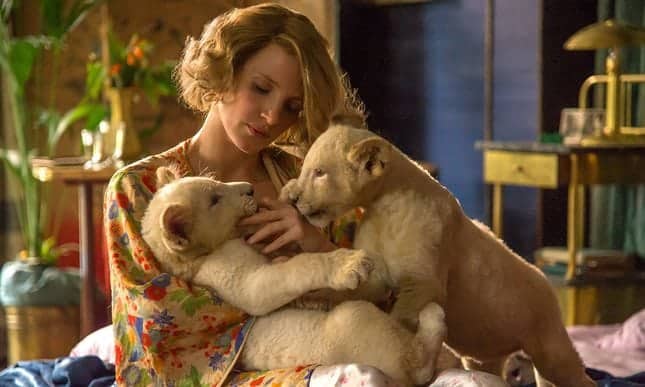 When it comes to films about people doing heroic deeds during WWII, it becomes impossible to review the film without taking into account the real people behind these truly harrowing stories. Based on a non-fiction book by Diane Ackerman, The Zookeeper’s Wife tells the story of a couple who bravely put their own lives in harms way to save over 300 Polish Jews from certain death by hiding them in their zoo.

Directed by Niki Caro, the film chronicles the lives of Antonina (Jessica Chastain) and Jan (Johan Heldenbergh) Żabiński during the German occupation of Warsaw, and the heartbreak they suffered after their modest zoo was commandeered by the occupation army and its animals either shot in cold blood or taken back to Germany to populate Hitler’s own Zoos. From a screenplay by Angela Workman, The Zookeeper’s Wife offers a fairly uncomplicated story, which is seemingly pretty close to that of the original source material. Chastain’s heartbreakingly honest portrayal of Antonina is as beautifully nuanced as it is subtle. The couple’s lives are turned upside down over night when gentle and caring Jan must hand his pride and joy to sadistic German army officer Lutz Heck (Daniel Brühl), who has also set his sight on Antonina. After a visit to the ghetto where most of Warsaw’s Jewish population is being kept, Jan is horrified at what he has seen and heard. Driven by a sense of duty towards his and Antonina’s Jewish friends and neighbours, he decides to help as many of them escape as he can.

There are things about the film which as a viewer you would want to admire, but sadly the whole thing is rather flawed and ends up looking like a cheap “made for TV” project. Putting the very worthy message of the film to one side, The Zoo Keeper’s Wife seems very stagey and almost goes through the motions in getting from A to B. People do exactly what is expected of them without ever veering off from the narrative.

Although heartening and deeply moving, the Zookeeper’s Wife has none of the solemn subtlties of Schindler’s List (Steven Spielberg, 1993) or of The Boy In Striped Pyjamas (Mark Herman, 2008). However, this is in no way the worst thing about the film, perhaps the most jarring aspect of this production is the odd choice of having the English speaking cast talk with in a polish accent. This device, which we have seen used in other films before, adds nothing of value to the story, and dramatically can even take away from its ability to convey what happened in the most honest way possible. Although beautifully acted and masterfully directed, The Zookeeper’s Wife feels a little too laboured and staged. The story itself is moving beyond words, but if you are after something more cinematic, you might feel a little bit let down..

The Zookeeper’s Wife is on general release from Friday 21st April.