By Sam Inglis   @24fpsUK  24fps.org.uk Gregg Araki started off as a true underground figure, making distinctive and divisive films like The Living End and his ‘teen apocalypse’ trilogy. Over the past decade, however, he seems to have been trying to square his auteurism and his favoured topics with at least some level of commercial […] 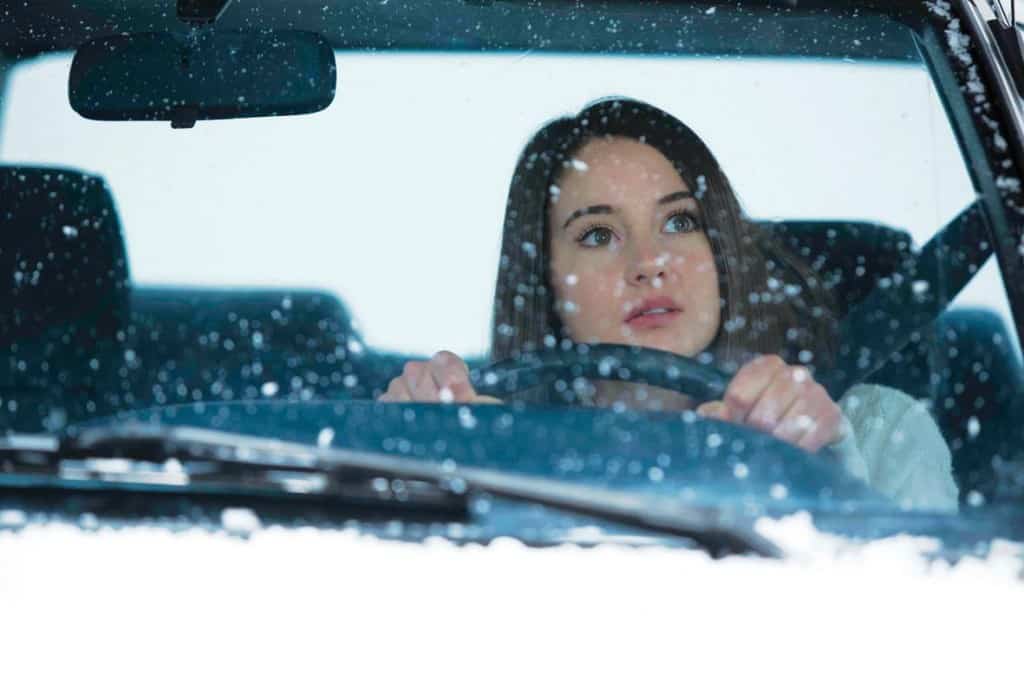 Gregg Araki started off as a true underground figure, making distinctive and divisive films like The Living End and his ‘teen apocalypse’ trilogy. Over the past decade, however, he seems to have been trying to square his auteurism and his favoured topics with at least some level of commercial appeal. Some films, like Mysterious Skin and Kaboom veer more towards his auteurist side, while Smiley Face was an unabashed tilt at the mainstream. White Bird in a Blizzard, in this context, seems a bit of an orphan.

The film is based, though I can’t tell you how closely, on the novel by Laura Kasischke. It begins with Kat (Shailene Woodley) telling us that, when she was 17, her mother Eve (Eva Green) disappeared. This is the mystery that will underlie the rest of the film as Kat grows up, goes to college, and grows apart from both her first boyfriend (Shiloh Fernandez) and her father (Christopher Meloni).

White Bird in a Blizzard is, for the most part, a restrained work from Araki. In it’s own way it’s as stylish as any of his work, and the 80’s period setting and the soundtrack that comes with it serve to underline that style. The period setting also works well in another respect; the lack of modern technology like mobile phones makes it feel more believable that someone could simply disappear one day. Kat’s small town life is quite drab. Her parents’ home seems a little old fashioned, as if the unhappy Eve has drawn on her own younger days when designing it, rather than fitting in with the trends of the time. Kat and her friends reflect their small rebellions against their boring – as much in look as in practice – town with their clothes and, in Kat’s case, often bold make up. It is Kat who rebels most significantly, sleeping with the detective (Thomas Jane) investigating her mother’s disappearance.

The style comes to the fore in a few fantasy sequences, in which Kat sees her mother in her dreams, all of which find them in a snowy landscape, Kat searching for the mother she seems to have lost some time before she vanished.

The entire film hinges on the relationship between Kat and her mother, and thus on the performances of Shailene Woodley and Eva Green. They aren’t the most obvious casting as parent and child, but their respective performances and, to a degree, Woodley’s make up, make it play. Both are excellent. Woodley is colder than we’ve seen her before; playing Kat as perhaps trying to seem more sure of herself and more grown up than she is, but also clearly as a young woman growing up with the influence of a mother who can be both weird and callous, and perhaps starting to emulate some of those traits.

Good as Woodley is, Eva Green is a force of nature. Over the last few years she has single-handedly made films as bad as 300: Rise of an Empire, Dark Shadows and Sin City: A Dame To Kill For worthy of at least passing attention. This time she isn’t the only thing worth watching, still, she tears through the screen with her sheer charisma and a performance that is JUST the right side of chomping too much of the scenery. Eve is pretty awful. In Kat’s memory we see Eve as a mother who saw her more as a pet than a child, and what we see in the more recent flashback scenes is a resentment from Eve that her pet no longer wants to play, and is having fun on her own. The dynamic between the two is great. Their work sustains the film, making it worth seeing despite its flaws.

The flaws of White Bird in a Blizzard are not inconsiderable. The scenes around the margins of the main story (notably those with Gabourey Sidibe and Mark Indelicato as Kat’s friends from home) feel like padding much of the time. The relationship between Kat and the detective, as well as having no depth, comes off a little exploitative of Woodley (who apparently negotiated several more nude scenes out of the script, amazing given how many remain). Most problematic is the way the third act has to race to wrap up. It takes the mystery in a new direction, which could have worked, but come the final resolution it’s unsatisfying. Thanks to Araki’s thematic preoccupations the final twist is totally unsurprising, but it also comes completely out of the blue, having never been seeded at all during the film. Misdirection is one thing, and Araki does that well, but the resolution just clunks; it’s a gear shift I don’t buy.

White Bird in a Blizzard has, for the most part, a strong first hour, but for me it begins to go off the rails when Kat comes back from college to visit her Dad. It drags the film down and leaves it feeling, overall, rather inconsequential. It’s a pity, because there are a lot of good things here. Woodley and Green may stick in the mind, but I doubt the film will.

The Film is on general release from Friday 6th March.