Miranda Schiller @mirandadadada Abderramahne Sissako revisits the country of his childhood, Mali, in his powerful outcry of a film. Timbuktu and the surrounding desert region were under jihadist control for about a year from 2012 to 2013. The new leaders, for the most part coming from different countries, ride around town on motorbikes and in […] 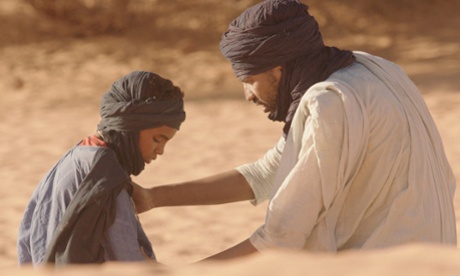 Abderramahne Sissako revisits the country of his childhood, Mali, in his powerful outcry of a film. Timbuktu and the surrounding desert region were under jihadist control for about a year from 2012 to 2013. The new leaders, for the most part coming from different countries, ride around town on motorbikes and in jeeps, announcing their laws with megaphones. Football and music is forbidden, women must cover up and wear gloves, it is forbidden to smoke, to sit outside of your house, it is forbidden to do “any old thing”, as one young jihadist concludes after getting bored of reciting the long list of bans.

Yes, these jihadists are ridiculed: They ban football yet heatedly discuss the world cup, they proclaim puritanism yet are addicted to their video cameras, phones and laptops. But they are not evil caricatures. They are also shown to have inner conflicts, doubts, weaknesses – they are human. Sissako does not attempt to explain how or why they became fanatic violents – which would probably be impossible – but he does not reduce them to it either.

Less can be said about his portrayal of the Tuareg. Personified in the family of Kidane, his wife Satima, and their twelve-year-old daughter Toya, living a happy little life in the desert with their eight cows. The whole setting seems construed mainly to appeal to Westerners’ romantic notion of traditional desert living. Nonetheless, the characters themselves are lovable and relatable, and what happens to them is the main cause for hot tears and broken hearts in the cinema audience.

In addition to the tragic story of this family, the film consists of a number of tableaus exemplifying the effects of jihadist rule on the society of Timbuktu. From a worried, but powerless Imam trying to discuss the real meaning of jihad as a personal journey rather than an armed crusade, to a defiant local woman refusing to wear gloves while selling fish, to a mother left shocked and incredulous when her daughter is kidnapped into marriage, there is a succession of conflicts, resistance attempts and sadness. Topped off by terrible scenes of stonings and lashings, never without a smartphone-filming perpetrator in view.

Although shot in Mauritania rather than Mali for safety reasons, it is also a celebration of the beauty of the landscape surrounding Timbuktu. Some of the shots would not look out of place in a nature photography exhibition, and of course, this beauty surrounding it makes the violence even more painful to watch.

But Sissako does not content himself with contrasting beauty and violence. For the most part realistic, Timbuktu is punctuated by borderline surreal scenes. One of the most lasting impressions is a group of boys miming a football match without a ball in a perfectly choreographed scene reminiscent of dance theatre. Even more so is a scene of one of the jihadists dancing a modern ballet like improvised routine in the desert sand, to a classical score, cut against the stoning of an allegedly adulterous couple.

Although brushing over some of the aspects of the Malian conflict, which is more complicated than the jihadist siege and is ongoing, Timbuktu does not paint a simplified picture of neither the oppressors nor of Malian society. A lot of the dialogues last much longer than they’d need to because someone always has to translate between Arabic, French, Bambara, or Tamashek, as hardly anyone speaks more than one or two of these languages. Playing out these scenes in their full length gives an impression of the day-to-day difficulties of living in Malian society.

Timbuktu is a heartbreaking story of an occupation told from within, with breathtaking imagery and a powerful sense of terror and despair.

Timbuktu is on general release from Friday 29th May.