By Miranda Schiller @mirandadadada Zoska is a boyscout, part of Szare Szeregi (the Grey Ranks), a scouting organisation fighting against the Nazi occupation in Warsaw. They mainly do acts of so-called “minor sabotage”, like tearing down a Nazi flag from a public building. With sharp editing and an upbeat electronic rock sound, these scenes evoke […] 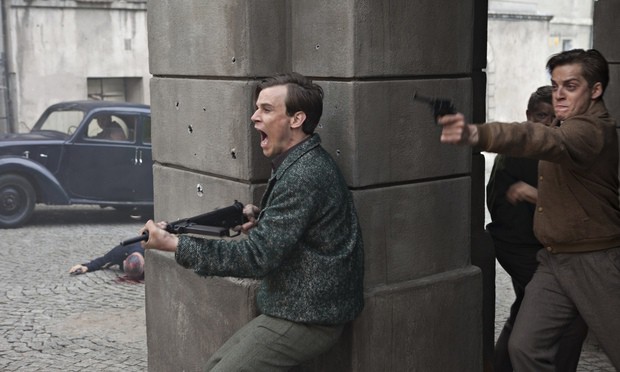 Zoska is a boyscout, part of Szare Szeregi (the Grey Ranks), a scouting organisation fighting against the Nazi occupation in Warsaw. They mainly do acts of so-called “minor sabotage”, like tearing down a Nazi flag from a public building. With sharp editing and an upbeat electronic rock sound, these scenes evoke classic coming-of-age film boy pranks. But this is quickly contrasted by showing the real danger of these acts. Even tearing down a flag could cost you your life in 1940s Warsaw. During their seemingly carefree ambles through the city, the boys often stumble on scenes of people randomly being stopped an shot on the street.

But things only go seriously dark when Zoska’s best friend Rudy is captured and tortured by the Gestapo. Zoska decides to use the organisation’s resources to free him, leading to the main conflict of the film. Should he accept the torture and death of his best friend, or should he put his own and other’s lives at risk to try and free him?

It is useful to know that Stones for the Rampart is the adaptation of one of Poland’s most famous novels. Written clandestinely in 1943 by Aleksander Kaminski, it was itself part of strengthening the resistance. Still today, the book is part of the Polish school curriculum and the main characters are national heroes. So much so that director Robert Glinski has been accused of tarnishing the image of these heroes by portraying them as normal boys who fall in love and have parties, and, most importantly, don’t always know what is the right thing to do.

With this background in mind, the room that Zoska’s dilemma takes up is much more understandable than it would otherwise be. His transition from an earnest, but happy young chap intent to stand up to the oppressor, to a desperate man ravaged by self-doubt is the vehicle to transmit not only the familiar message that “war is hell” but that there is no aspect of life that war does not destroy. There is no place for heroism or adventure, there is only death and grief.

As much as it made sense to try and recruit young people for the resistance movement in 1943, this adaptation is much more in tune with contemporary views of the complexities of conflict. De-glorifying and de-mythologising the resistance makes it easier to relate these characters to real people all over the world today who face oppression or grow up in war or conflict zones.

But although all these directorial good intentions are visible all over the film, its suspense is not lost. Especially the contrasts between seemingly happy scenes of normal life and the terrible violence and threat increase the shock of the latter indefinitely. The mainly inexperienced actors give their characters a hopeful, slightly naïve confidence, which is then crushed all the more harrowingly.

Stones for the Rampart sits well in line with contemporary war films which place doubt and suffering over fights and honour. Although there is no shortage of gun-heavy street fights and boyish fooling around, there is a constant underlying sadness souring any impression of carefreeness. This balance between feelings of adventure and terror is what translates the bitter reality of war into a film both thrilling and jarring.

Stones For The Rampart is in cinemas from Friday 17th April

I understand the novel your film is based on is very well-known in Poland. What made you want to re-tell the story?

It is a very famous novel, every generation in Poland has read it. The reason I wanted to make this film is my mother. She was part of this scouting organisation and was involved in the Warsaw uprising. She personally knew the main characters of the book, and she told me a lot of stories about them. In the book they are described as patriotic statues, but my mother told much more personal stories, she knew what they liked to eat, she knew their characters, their normal lives, their jokes, their first loves. So I feel like I have a personal relation to those characters.

You have been criticised in Poland for your portrayal of the boys as not just straightforward heroes, but also as normal boys who fall in love, who have doubts and don’t necessarily always know what is right. How important do you think it is for Polish society today to question their hero tales?

But I knew a lot of small things about their lives that were not in the book. I have read other books about them, and I have talked to my mother and to friends of my mother’s. The boys meet girls, they fall in love. I don’t know why the book missed that part of their lives and turned them into monuments without personal lives.

And it’s not just about the girls and falling in love. They also had doubts about what they were doing. There was a big discussion within the scouting organisation, about the question whether to kill or not. Of course for the army this is not a question, but these were not soldiers, they were scouts, they were just teenagers. Everyone agreed that the Germans were enemies and occupiers, but they discussed a lot about whether it is right to shoot them. About the psychological impact for a boy or a girl to shoot someone.

I showed this film in Haifa in Israel, and the audience stayed for four hours to discuss this exact question. One audience member said this is the main problem of Israel today, if the young generation can kill enemies. When they get out of the army, they try to get back into normal life and they don’t know what is right and what is wrong any more, if they should fight or not. The main character in my film, Zoska, has the same problem. At the beginning, he wants to be a hero, he wants to shoot and kill, but in the end he has a lot of doubts. This is the main conflict of the story, and that can be told anywhere in the world.

When you first made the film, was this part of your intention, to show it to an international audience and make the story relatable to people outside of the historical Polish context?

Yes. In Poland the audience showed a very good reaction, especially young people loved the film. It may have made them cry, but they liked it a lot. For an international audience, the historical context can be difficult to understand, the relation between the scouts and the army, the specifics of the Nazi occupation of Poland. But the general story everyone can understand, it is about friendship. Basically there are two main characters, one gets captured by the Gestapo, and the other one wants to free him. This could be the story of an American Western, with Gary Cooper trying to free his friend from captivity. It is a story easily understood by everyone. And the same goes for the ideas and moral values, the question whether to kill or not to kill.

The music is distinctly modern and makes for a contrast with the period setting. What was your intention there?

It is more complicated than that. I used modern music, because I wanted to put some modern energy to the characters. Music builds a comment to the story on the screen. But there is not just modern music. We used the motif of Tango Nocturno, which was a popular song at the time, sung by Pola Negri. The song is integrated in the action of the film, and the motif is reprised. The music structure in this film is very complicated, it could be the subject of a lecture.

Although there are a lot of boys and girls in the story, the main focus is on just one character, while the others are not fleshed out as much. Why did you decide to tell it as Zoska’s story?

The problem with putting a book to the screen, if I used everything, it would be twenty hours long. In my opinion, the main event of the book is Zoska’s attempt to free Rudy, so I decided to choose this aspect. I had to leave a lot of characters and events from the book out. I am very sorry about that, but it is just due to the dramatic structure of film. There are a lot of nice and lovely characters in the book and I am sorry I could not include them, but I could not make the film longer than two hours.