By Linda Marric There are films which will make you fall in love with them almost instantly, they may not look as polished or roll as smoothly as you might have hoped, but you somehow develop a deep love and admiration for what the director and his cast have tried to achieve. Rules Don’t Apply […] 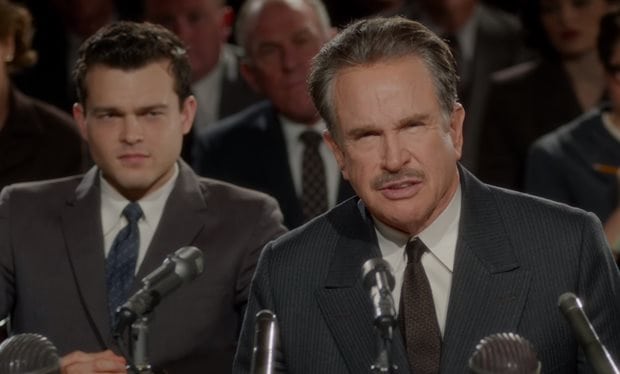 There are films which will make you fall in love with them almost instantly, they may not look as polished or roll as smoothly as you might have hoped, but you somehow develop a deep love and admiration for what the director and his cast have tried to achieve. Rules Don’t Apply can firmly be placed in that category; from the opening tittles you are completely gripped by what is to come, and you can’t even bring yourself to be exasperated when the script veers off the main point, instead you are seized by a wave of nostalgia for the way films used to be made.

In his first on screen appearance in 16 years, Hollywood legend Warren Beatty, writes as well as directs this new look at eccentric tycoon Howard Hughes, and hopes to offer something new to the already rich tapestry of Hughes biopics. Starring as the man himself, Beatty brings with him that old Hollywood mystique in depicting the then owner of RKO (a major film studio during the classic Hollywood era). Also starring along Beatty, is an array of well known faces who no doubt came out on force to support Beatty in this likeable, yet problematic production.

Aside from the main Hughes-centric storyline about his increasing paranoia and odd behaviour, there is a rather charming thread about a love affaire between Frank Forbes, one of Hughes’ drivers (Alden Ehrenreich) and a young actress named Marla Mabrey (Lilly Collins), who along with another dozen young hopeful actresses has been signed and locked into contract by Hughes without ever getting a chance to star in single movie. Collins and Ehrenreich make up the heart and soul of the narrative. With Ehrenreich’s beautifully disarming charm and Collins’ impressive acting talents, Rules Don’t Apply manages to speak to the hopeless romantics amongst us, and masterfully achieves way more than it set out to do by making us care deeply about the protagonists.

On the whole, some might accuse Beatty of self-indulgence in making a needlessly long film about a subject already exhausted by numerous other biopics, but what nobody can accuse him of is failing to bring something new to the mix. The love story at the heart of the film, is what will keep you hooked till the very end. With a brilliant era defining soundtrack, Rules Don’t Apply may not win any awards in the originality stakes, but is a highly enjoyable and a pretty honest period piece which deserves to be seen.

Rules don’t apply is in cinemas from Friday 21st April.