By Stephen Mayne Is it possible to escape the past and do we ever really want to? Now on their sixth feature together, Christian Petzold and Nina Hoss turn to the dark depths of Germany’s recent history to delve into a noir infused world of blind hope and half-truths. As Hoss’ concentration camp survivor struggles to […] 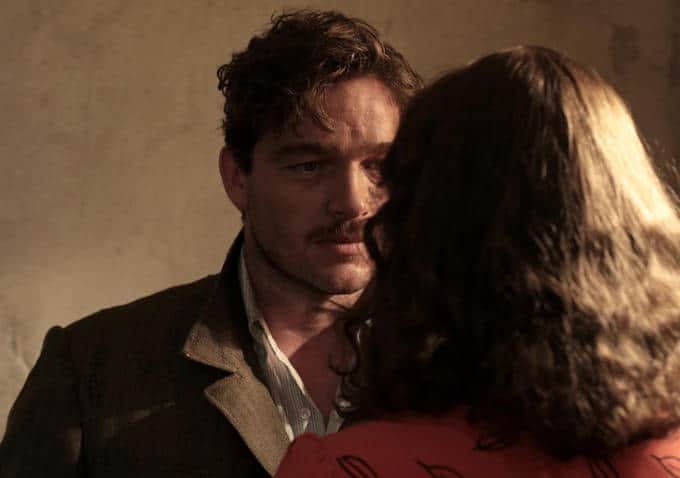 Is it possible to escape the past and do we ever really want to? Now on their sixth feature together, Christian Petzold and Nina Hoss turn to the dark depths of Germany’s recent history to delve into a noir infused world of blind hope and half-truths. As Hoss’ concentration camp survivor struggles to reconcile new and old lives, Phoenix, hinging on a clever conceit, steadily picks up momentum towards a subtly powerful conclusion.

The film opens with Auschwitz survivor Nelly Lenz (Hoss) swaddled in bandages in the passenger seat of a car. Her friend Lene (Nina Kunzendorf), one of the lucky ones inasmuch as she avoided the camps, has returned to collect her. Tension mounts as they’re stopped at a checkpoint, the soldier casually bullying them until he realises the extent of Nelly’s injuries. She’s on her way to a hospital for facial reconstruction, an imprecise art that leaves only a likeness of her past self. Holed up in Berlin to recover while they make final arrangements for a new life in Israel, Nelly can’t stop from hunting down her husband Johnny (Ronald Zehrfeld), the man Lene believes betrayed her to the Nazi’s.

A rich seam of uncertainty runs through the heart of Phoenix. With an only vaguely recognisable face, Nelly wanders a city that no longer looks like itself. Rubble lies everywhere, multi-lingual checkpoints are part of the daily routine, and shady streets are full of shadier characters. On her first venture into this new world, she’s robbed. It could have been worst. Lene advises her to carry a revolver, thrusting the gun on her. For the rest of the film, Nelly wanders around with a potential climax lying hidden in her bag, Petzold playing on this every time tempers fray.

Nelly’s desperation to return to a semblance of the past takes over fully when she finally tracks down Johnny. Stuck between moving to a country that barely exists, and leaving the one that’s been all she’s known up to this point, she can only tentatively question her husband. She’d prefer to believe the best. If she doesn’t, there’s nothing left. It’s here the screenplay by Petzold and co-writer Harun Farocki shifts gears adding a clever change of direction that veers off into Vertigo territory.

As the film moves from atmospheric mystery to labyrinthine thriller, Hoss’ performance becomes ever more important. She’s the centrepiece off which all other strands hang. In a terrific display, she affects a haunted expression that morphs into understanding over the course of 90 minutes. In her hands, Nelly isn’t just looking for answers; she’s looking for herself. The shrunken figure in bandages gives way to horror at her altered reflection, denial at her new circumstances, and finally determination. Able support comes from Zehrfeld and Kunzendorf who play their parts perfectly without threatening Hoss’ dominance.

In lesser hands, Phoenix could have been a tricksy, shallow enterprise, content to luxuriate in period setting and sudden reveals. At times it toys too much with a 1940s backdrop of cabaret jazz, randy GI’s and pinstriped suits that borders on pastiche. Instead of resting here, Petzold goes deep into Nelly’s psyche, giving every turn a deeper resonance. She has two mysteries to solve; Johnny’s feelings for her, and where she goes from here. A beautifully controlled final scene caps off a strong film, bringing an impressive conclusion to both.