See You Yesterday ★★★★☆ In the last year or so we have seen several films that suggest the impact of the Black Lives Matter movement on cinema. See You Yesterday is something of a departure in that rather than sticking to a realistic setting it folds its message into a genre film. CJ (Eden Duncan-Smith) […] 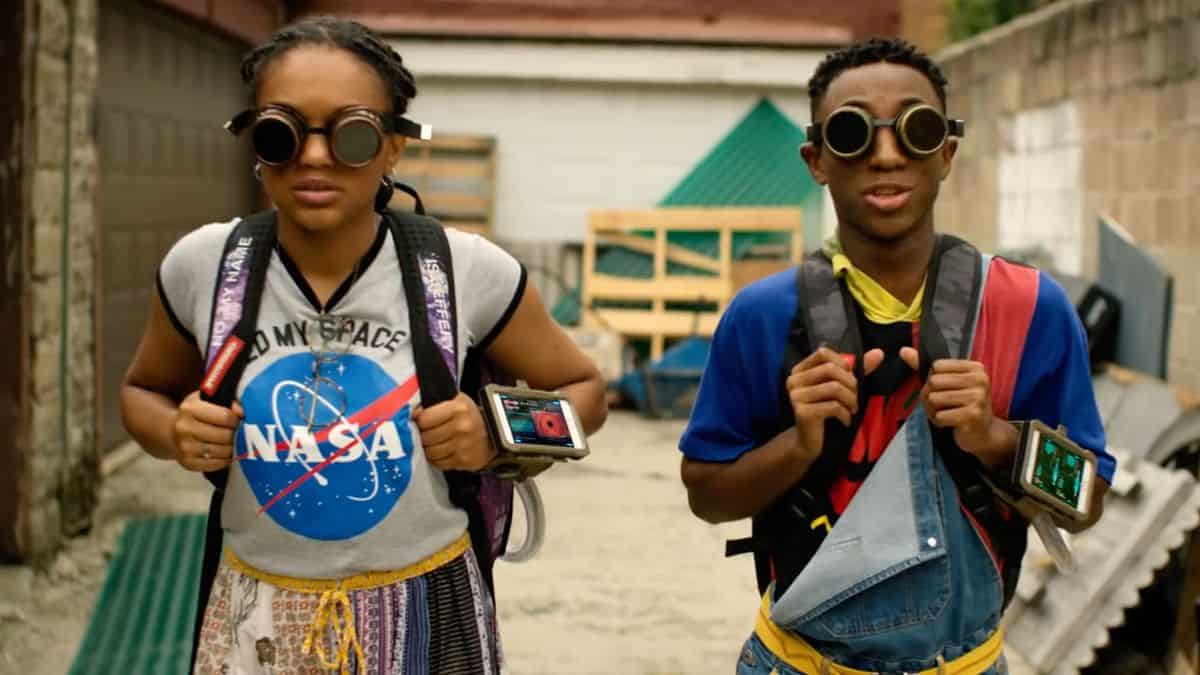 In the last year or so we have seen several films that suggest the impact of the Black Lives Matter movement on cinema. See You Yesterday is something of a departure in that rather than sticking to a realistic setting it folds its message into a genre film.

CJ (Eden Duncan-Smith) and her friend Sebastian (Dante Crichlow) are very, very smart. For their upcoming science fair, the pair have been working on – and have just successfully tested – time travel. When CJ’s older brother Calvin (Astro) is killed in a police shooting, she persuades Sebastian that they should use their time machines to save him.

The story behind See You Yesterday is destined to be a bit of Hollywood legend. Stefon Bristol was studying under Spike Lee, who harshly criticised Bristol’s first student short film, by his own account a cliche hood tale influenced by films like Boyz N The Hood and Menace II Society. What this criticism did was inspire Bristol to move away from cliche and to tell a genre story, while still focusing on black protagonists and folding in the real world experiences that he wants to comment on. His command of tone is one of the best aspects of this feature debut, produced by Lee. Initially, See You Yesterday seems like it’s simply going to be a good natured lark about two friends who, through their intelligence and inventiveness, discover something amazing that they are unprepared for the implications of. The expectations of this tone are also set by a cameo that has, happily, been kept secret (and a nod to an iconic film that made me grin from ear to ear) in the first scene.

When CJ’s brother dies, things change drastically and the tone shifts to something darker. Audiences may be concerned when we see Marty’s family fading from the photo he carries in Back to the Future, but Marty’s brother and sister are ephemeral in the film. Calvin isn’t, and that along with the violent nature of what happens to him makes an image of him fading much more real and much more serious. Another stakes raising aspect of the events we see here is that it is only the time travel that is fictional, and with this Bristol engages in the fantasy that anyone who has experienced loss goes through: if I just had ten minutes I could change things. He is also commenting on the reality of, largely, young black men being taken violently, leaving a family behind not in a slow fade but a hard cut.

This is an impressive feature debut for Bristol, who co-writes and directs, expanding from his short of the same title. It’s great to see a broadening of the kinds of black protagonists we see in film and CJ is a great example – her intelligence centered over anything else, but not to the exclusion of her exterior life (we see a confrontation with an ex boyfriend, and her fending off the clumsy advances of another suitor as well as the familial relationships and friendship with Sebastian).

It’s nice to see a friendship between male and female protagonists that doesn’t seem to have even a hint of sexual tension. CJ and Sebastian’s dynamic is warm and caring but clearly platonic and, again, centered around their love of science. Eden Duncan-Smith and Dante Crichlow forge what feels like a genuine connection in their roles, and are both charming and dynamic presences who I hope we’ll see more of.

This a strong calling card for all concerned; an intelligent film that slips its politics in, making the message effective while weaving it into the fabric of its genre structure. If Stefon Bristol continues down this road he could create himself an interesting niche.

It has only been in relatively recent years, since she began to put out multiple dissents as she was shifted further to the left relative to her colleagues, that I became aware of the US Supreme Court Justice Ruth Bader Ginsburg. Now 86, she has become an unlikely celebrity in later life, given the memorable nickname of Notorious RBG, largely by liberals who are hoping against hope that her career can outlast Donald Trump’s presidency.

While I now follow US politics fairly closely – certainly enough to be aware of Ginsburg’s positions and all around impressiveness – I hadn’t known much about her life and achievements prior to the Obama administration. It’s fair to call out Betsy West and Julie Cohen’s documentary for being pure hagiography, but also to say that it’s hard to imagine anyone who more deserves this adulation than Ginsburg.

Ginsburg comes across serious, but as though she’s developed an effective line in knowing humour since the Notorious RBG stuff began, and as still being one of the sharpest people you’d ever encounter.

The film tracks her legal career, her activism against gender discrimination and her lifelong marriage to her late husband Marty. All of this is clearly selective to reflect the best of everyone involved, but that’s not to say it isn’t enlightening. There is a fair amount of dry laying out of the facts here, but it’s leavened by the story of Ruth and Marty’s marriage, which seems like a perfect odd couple match. Any time we hear them talk about each other, the emotion is right there in every word. That spark, surprisingly, is also there in the section on her unlikely friendship with her polar political opposite, Antonin Scalia. In scenes clearly shot before his death, she talks of him with obvious warmth and affection despite their differences. This feels revealing, if not of how she has been able to conduct her business on the court then of how she’d like it to work.

Stylistically, it’s fairly standard issue stuff, with little to break the typical pattern of cutting between talking heads, archival footage and a few behind the scenes glimpses, but it’s all worthwhile information and Ginsburg’s ability, honed in her law career, to make a listener hang on every word, means that making her the driving force of the film works perfectly. I’d happily listen to her for far longer.