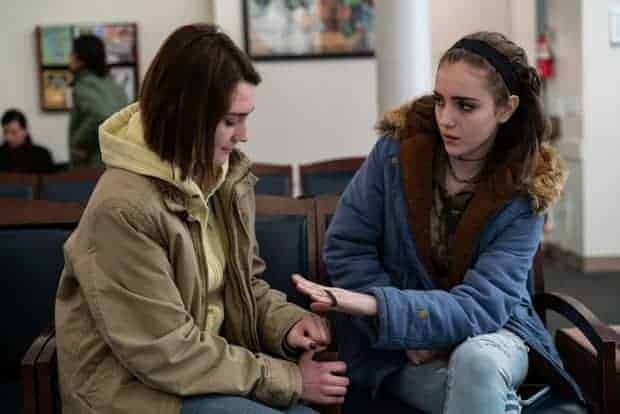 Director Eliza Hittman is carving a niche for herself as a formidable purveyor of hyper-realistic myopic personal tales of lost youth which irradiate damning commentary on broader societal issues. In Never Rarely Sometimes Always, the multiple-choice options on an assessment form at an abortion clinic; she details a probable journey for countless teenagers in Republican America, who resort to surreptitious and precarious methods of crossing state lines in order to get an abortion.

In this road movie of sorts, from rural Pennsylvania to New York City, Autumn (Sidney Flanigan) with help of her cousin Skylar (Talia Ryder) armed with a cumbersome wheelie bag make their way to a downtown Manhattan clinic where she will be able to terminate her pregnancy anonymously.

Autumns attempts at a DIY abortion are knowingly futile, whether it’s downing a whole bottle of vitamin C or punching herself in her lower abdomen. Simmering echoes of Mike Leigh’s Vera Drake, mostly in subject matter, where unsolicited pregnancies in the realm of financial scarcity and abusive husbands corners women into resorting to drastic measures. One would hope seventy years on matters would have changed somewhat.

Her local family clinic requires parental consent to carry out the procedure and it’s not before they make every attempt from deterring patients from doing so. This family planning practice sole aim is to push their pro-life agenda, coercing individuals into watching graphic videos about the medical and religious horrors of abortion. Even the doctor in the surgery conducting the ultrasound unprofessionally exclaims ‘this will be most beautiful sound she will ever hear’; a non-descript automated thud booms into the room, Autumn is unmoved, turning away from the screen without a second thought.

Hittman never allows for any maternalizing of the situation, keeping things clinical and detached. There is zero funfair, unnecessary elucidations are done away with as this pregnancy in unwanted; likely the result of repeated sexual abuse, maybe from someone close to home. Instead Hittman opts for locations, sparse dialogue, prolonged silences, facial and somatic expressions to narrate her story. In doing so, she intensifies the poignancy of the 17-year-old’s ordeal and the predictable inhumane obstacles put there by a conservative government.

Skylar comes to her rescue, willingly accompanying Autumn; stealing money from their float at their part time job in order pay for the operation and their travel. There is a lot inferred between the two but not much spoken, as if the two’s life-long familiarity allows for telepathic communication. Even in Autumn’s tacit off moments, Skylar remains unruffled completely understanding of her predicament. The camera remains up close and personal throughout, zooming in on the actor’s faces, letting simpers and frowns hold the conversation.

This methodological use of conversational restraint is prominent throughout. Such as in the film’s most pivotal scene, where Autumn is being psychologically assessed before her procedure by a social worker whose comforting high register is a rare moment of kindness. The scene confirms suspicions of more sinister hapennings, as the questions become progressively personal and penetrating, involving abuse and rape over a sustained period. Autumn becomes increasingly reluctant to respond, choked by the surfacing of unpalatable emotions. The visible discomfort and her inability to hold back the tears speak volumes, perhaps more than any verbal answers would.

Men are presented as perpetrators in both the young women’s world. From the very first scenes of Autumn’s guitar performance at her highschool talent show embarrassingly interrupted by a boy yelling ‘slut’ at her, or be it her unaffectionate creepy step-father, or their boss at the grocery store who inappropriately slobbers all over both their hands when they cash in at the end of their shift. On the coach, a young boy Jasper (Théodore Pellerin) couldn’t help himself but intrude on their girls’ space, by what he deems an innocent touch on Skylar’s hand. Jasper’s presence lingers on in the film, enchanted by Skylar’s beauty, transforming from lecherous teen to an eventual financial lifeline.

Never Rarely Sometimes Rarely is an exceedingly powerful movie demonstrating Hittman’s talent for moving, true-to-life storytelling. Composed with thorough detail and calculated reserve, it pulls all the punches without ever saying anything directly. Admittedly it paints a bleak picture, the greyness is ubiquitous; from the gloomy subject matter to the more visual aspects of its bland interiors to the featureless New York streets. But her observations couldn’t be more vital, stressing injustices that need to be address. Whether it be our imprisoning class system, rampant toxic masculinity to the pseudo moral compasses of authoritive figures, which in this instance forces individuals to risk their lives in a bid to make their own decisions about their own bodies.