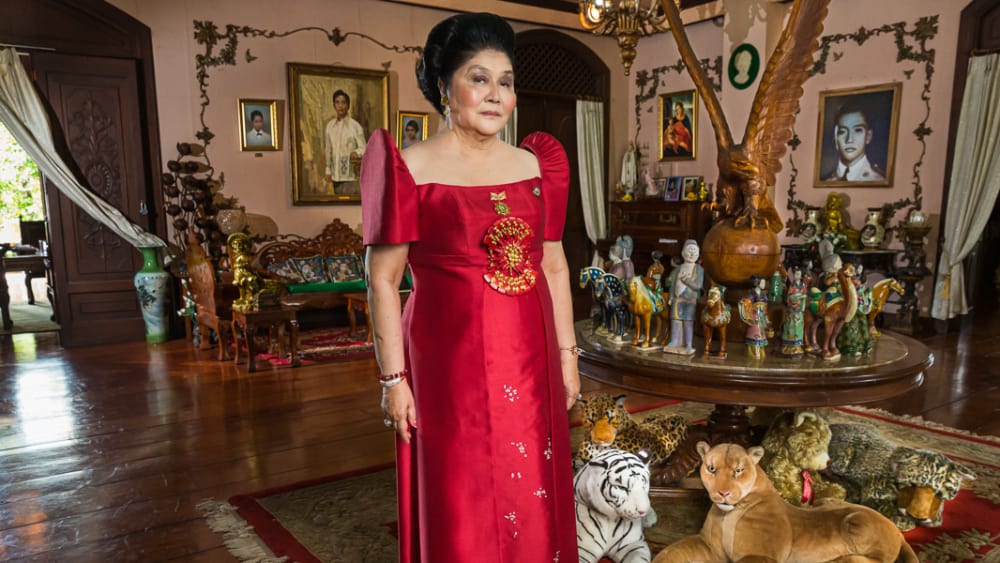 Lauren Greenfield is no stranger to making wealthy eccentrics the focus of a documentary. She’s actually made quite the career out of it. From her award winning second feature Queen of Versailles to the most recent Generation Wealth, Greenfield is an expert at squeezing her way into the closets, bedrooms and scandals of the über-rich, often with illuminating results.

In one sense, The Kingmaker isn’t a world away from Queen of Versailles. Both films focus on wealth and extravagance as a way of life, its subjects both slightly humbled and bemused by a relatively recent collapse in their economic state, the power and lifestyle they are so used to extinguished. Yet, The Kingmaker goes one step further, straying into investigative journalism territory to reveal objective horrors about the subjects that Greenfield has held up on-screen. It is a step up for Greenfield as a filmmaker, and a challenge to which she rises to completely.

Imelda Marcos, who might just be as well known for her vast shoe collection as her position as First Lady of the Philippines from 1965 to 1986, is the focal point of The Kingmaker. Filmed from 2014 to 2016, Imelda Marcos is in her mid 80’s when Greenfield begins shooting the film, seemingly an eccentric older woman who enjoys the finery that her position in Government has bought her.

Interspersed between shots of Marcos handing out wads of cash in poor areas of Manila to malnourished children, is Marcos’ life story. It’s a fairly conventional way to introduce Marcos, particularly as The Kingmaker begins under the guise of a biography, but as Marcos reminisces about the past, several unsavoury details begin to come to light. She speaks fondly of meeting Ronald Reagan (“he was misunderstood”) and how she asked both Saddam Hussein and Chairman Mao “what is your problem”. She holds up family portraits, beautiful jewels and repeatedly asks Greenfield if she looks fine on camera. She laments the loss of clout that came with being the First Lady. She describes herself as the mother of the Filipino people, at one point confusing the word mother with money.

Whether one has an understanding of Filipino history and politics or not, Greenfield’s film is easily accessible and engaging. The route into the horrors of the Marcos dynasty (which is still going strong today) is via Imelda Marcos, a woman who sits amongst gold chairs, in front of classical artworks paid for by embezzled funds. ‘Perception is real, and the truth is not”, Imelda says to camera – reminding us that fake news is not limited to one corner of the globe. In this way, the story Greenfield tells is closer to home than many could imagine.

Greenfield has constructed The Kingmaker in such a way that Marcos is initially quite charming (something that she acknowledges has come in useful when dealing with foreign powers), but the rug is slowly winched out from underneath us. As the film opens up to additional voices – activists, protestors, schoolteachers and others tortured throughout the military coup of 1972, instigated by Ferdinand Marcos – the facade of Imelda Marcos falls away.

Narratively, The Kingmaker has everything. A villainous dictatorship, displays of outlandish and, at times, disgusting wealth (including a personal safari park – just one of the more absurd aspects of the Marcos reign), government mandated assassinations of a hero figure who attempts to piece the Philippines back together (Corazon Aquino perhaps deserves a documentary of her own).

The Kingmaker never forgets that this is not fiction – these horrendous acts really happened and they are treated with the reverence and nuance that they require. The access that Greenfield has to the Marcos dynasty is almost unbelievable, but it perhaps more unbelievable when she asks Imelda Marcos directly about the 14 years of martial law which resulted in the torture and imprisonment of over 70,000 people. Shocking and brutal but above all else, impressive – The Kingmaker is a must-see documentary.