RelatedPosts Film Review: Monsoon Film Review: Cuties Film Review: Tenet Film Review: Koko-Di Koko-Da By Linda Marric One minute into the credits of Kong: Skull Island and you can’t help but smile, because you know this isn’t going to be one of “those” monster films with unending battle scenes and little else. So if you […] 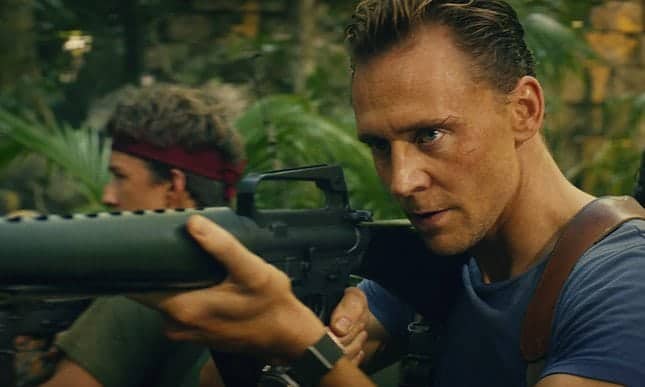 One minute into the credits of Kong: Skull Island and you can’t help but smile, because you know this isn’t going to be one of “those” monster films with unending battle scenes and little else. So if you were expecting a testosterone drenched blockbuster a la Michael Bay, rest assured that this is nothing of the sort. Produced by the same team who brought us Godzilla (Gareth Edwards, 2014), Kong: Skull Island not so much borrows but steals from the decade it is set in. From the lengthy expositional credit sequences, to the homage to anything analogue, Kong not only looks like a ‘70s movie, it actually is for all intents and purposes a ‘70s movie.

Set at the tail end of the Vietnam war, the film takes cues from every Vietnam war movie you’ve ever seen, and with its tongue firmly buried in its cheek, pays tribute to Apocalypse Now throughout the film. Starring Tom Hiddleston as the dashing ex military British hero James Conrad, and the excellent Brie Larson as “anti-war” photographer Mason Weaver. Larson is thoroughly likeable as the sometimes lone voice of reason amongst the group. The film is a playful origin story about the quest for a mythical creature on a mysterious island in the Pacific. A group of scientists, escorted by an army regiment on their last mission before returning home, find themselves trapped on the island after a disastrous crash landing. The group must not only survive attacks from the great ape himself, but also from other unsavoury creatures.

John Goodman is brilliant as the reckless scientist whose obsession with the island lands the group in hot water. Starring alongside Goodman is John C. Reilly in a scenery-chewing performance, as a marooned WWII pilot who comes face to face with the group as they make their way through the island. The film isn’t without fault, as the nods to ‘70s war movies start to grate after a while; having said that, Kong: Skull Island delivers a highly enjoyable 120 mins, and has more charm than the whole of the Transformers franchise put together.

Kong skull Island is on general release from March 10th.