By Stephen Mayne  @finalreel The problem with gaudy revenge flicks, the type Liam Neeson has been padding out the pension pot with in recent years, is the need to establish sufficient mythology around the near invincible hero. John Wick neatly sidesteps the issue starting Keanu Reeves’ title character as a living legend while filling in […] 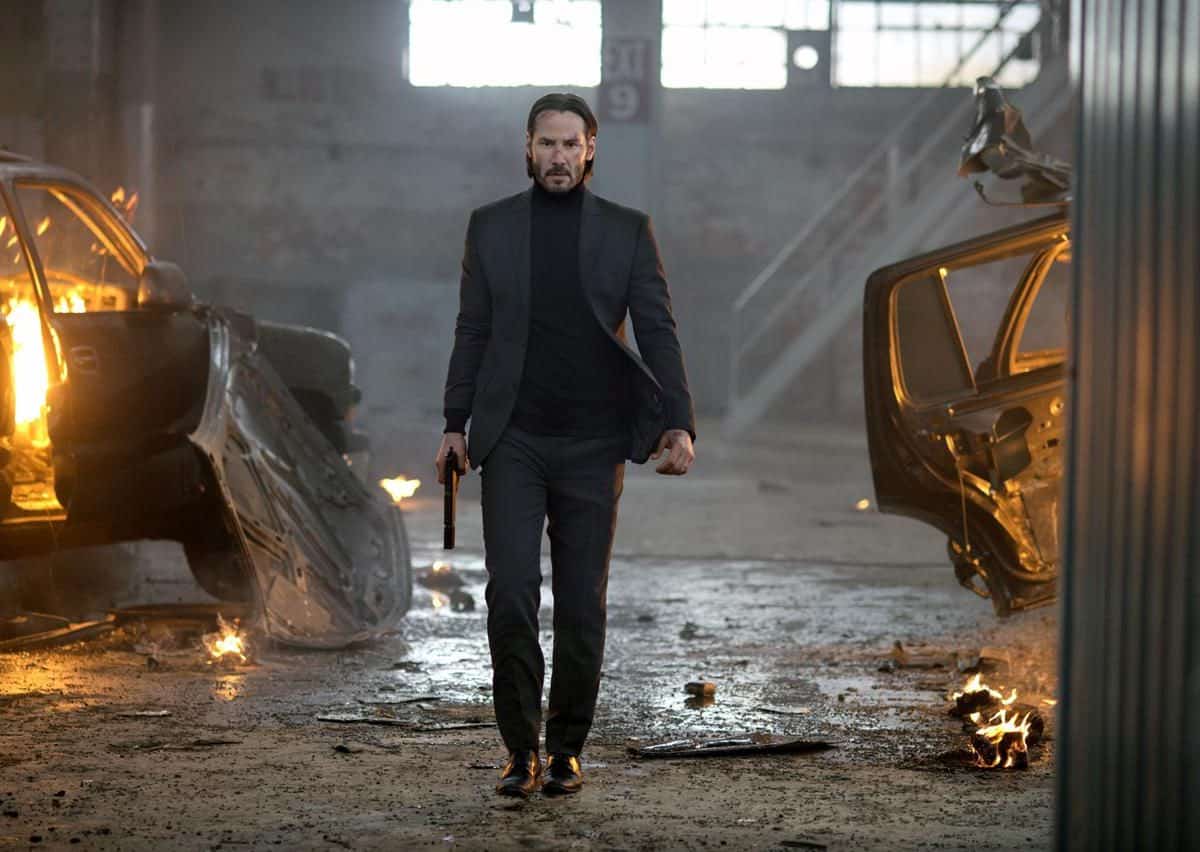 Wick, formally a deadly mob enforcer, first appears crashing a car before stumbling out to apparently die quietly in a puddle, though not before summoning up a video on his phone of a woman we later discover to be his deceased wife (Bridget Moynahan). This brief snippet signposts the madness to come, as if anyone really had any doubts. Now the film’s established it’s not going to be 90 minutes of a morose widower struggling to pull his life together, the story zips back to just a short period of time before when Wick was nothing more than a morose widower struggling to pull his life together.

What does it take to bring a man who’s left a career of death and destruction back into the game? Stealing his car is pretty bad, as Alfie Allen’s idiotic son of a mobster does. But the real kicker is the decision to kill his dog, a puppy recently sent from the grave by his dead wife. Allen and his small-time crew might be the only people who don’t know who Wick is. When he turns up to try and offload the car at Aurelio’s (John Leguizamo) chop shop, he gets punched in the face. Later when Michael Nyqvist’s crime lord Viggo calls to ask for an explanation, he can’t even summon a full sentence on hearing Wick’s name.

So the stage is firmly set. Viggo must defend his son out of family obligation. He gathers the biggest force he can and contracts a number of Wick’s former colleagues including Willem Dafoe’s sniper and Adrianne Palicki’s fast fighting assassin. And then the carnage commences starting at Wick’s house where he coolly dispatches a platoon worth of mercenaries. They nearly all get a bullet in the head to make sure. Wick’s not for taking chances.

The film continues to ramp up as the battle moves to the big city. Individual showdowns follow leading to an explosive finale. Nothing beats a wonderful nightclub set piece at the halfway point that warrants the entry fee alone. Moving methodically through grinding dancers and flashing neon, Wick clears floor after floor, firing off more bullets than it seems possible for one man to carry. He has pure cold rage in his eyes, pretty much the only expression to cross Reeves’ face throughout, and everyone is running scared.

This is why John Wick stands out. It’s not a grim revenge thriller. It’s a tongue-in-cheek actioner that’s found itself a high concept to die for and won’t let go until every drop of entertainment is wrung out. Sure, the action is fantastically choreographed, and Reeves’ deadpans with the best of them, but it works because it knows not to take itself too seriously. The screenplay revels in reactions to the name John Wick. He’s not the bogeyman as Viggo remarks. He’s the guy you send in to kill the bogeyman.

There’s a lot of fun to be had with this outrageous premise. Even were you to ignore the fact that he’s killing to avenge his dog, a number of comic asides are dropped in. There’s Lance Reddick’s concierge batting away a request for laundry straight faced and Clarke Peters’ fellow hitman chatting casually while Wick beats up an assailant. One moment sums up the entire film perfectly. After causing a ruckus while wiping out attackers in his house, the police knock on the door. Wick answers and they chat pleasantly until the cop spots a body in the hallway. Instead of arresting him, he simply asks if Wick’s working again. No the answer comes, just sorting some things out.

John Wick is stupid beyond belief, and completely disinterested in Wick and the world around him. Not that it matters. Watching him sort some things out is blissfully unrestrained fun.

John Wick is on general release from Friday 10th April.