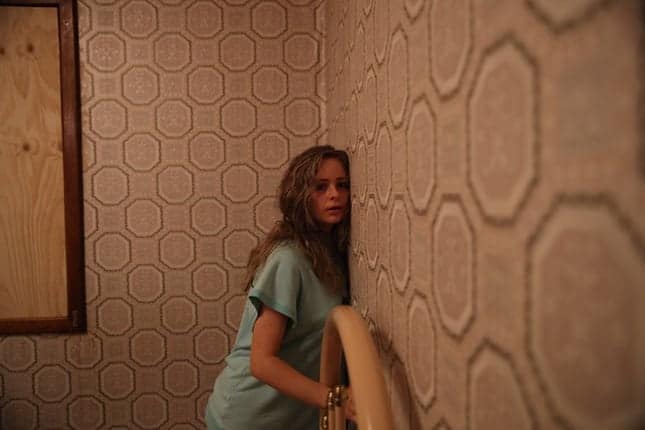 The sun baked streets of Perth shimmer in the December heat. A group of teenage high school girls play netball. Their movement to the leering eyes of John (Stephen Curry) and Evelyn White (Emma Booth), who sit spying on them from the sweaty interior of their car, an orgiastic ballet of short skirts and tanned skin, youth and innocence. The game is over and the girls head their separate ways. John and Evelyn offer a lone traveller a lift and not long later, wrapped in tarpaulin, she is being ditched in a shallow grave in the outback. So begins Ben Young’s debut feature film, Hounds of Love, a dizzyingly tense and layered serial killer thriller.

Vicki (Ashleigh Cummings), whose parents are divorced, blames her mother for the break-up of the family and one night, in an act of defiance, sneaks out of the house to attend a party. Walking alone in a crusty part of the neighbourhood she’s tempted by the promise of weed and a ride by the Whites. A glass of goon later and the nightmare of Vicki’s fate is sealed as she is dragged and chained to a bed in a spare room, the sultry song, “Nights in White Satin,” hauntingly mingling in the air above her muffled screams.

John, the king of his household, but nothing more beyond its threshold, is an insidious, bloodthirsty sociopath and master manipulator who takes a particular liking to Vicki. Emma is love starved and has been deeply affected by the removal of her children from a previous marriage. She is a victim turned co-conspirator, addled with jealousy and guilt and her vulnerability exposes an opportunity for Vicki to capitalise on. All three put in strong performances, Stephen Curry, Australian funny-man playing superbly against type. However, it is Emma Booth who is the stand out, she is the portrait of a broken women, a river of emotions, tenderness, cruelty and madness, existing behind a slowly deteriorating dam wall.

The stage is set and there are attempted escapes, mind games, and violent retribution, but Young confidently steers clear of cliché and never gives in to gratuitous violence. Hounds of Love gains all its power in the way it ratchets up tension until it is a boiling pot of palpable anxiety, before Young steps in and closes a door letting the imagination fill in what the eyes cannot see. It works to phenomenal effect and is toe curling horrifying.

More impressive still is how Hounds of Love can be read as a feminist metaphor on the dynamics of abusive relationships. Although the character you root for is Vicki, the film is about Evelyn, who equally suffers under the torment of John and one can’t help, but feel that the girl strapped to the bed, being raped and tortured, pleading for her freedom is symbolic of Emma’s, and many other women’s, struggle, trapped, helpless and desperate to be free too.

Ben Young proves that he is a talent to watch out for with this chilling thriller that is superbly crafted.

Hounds of Love is in cinemas from Friday 28th July.