By Leslie Byron Pitt If you have a quick glance at the IMDB page of Futuro Beach director Karim Aïnouz, you would find a substantial amount of award nominations. This includes Futuro Beach being selected for the Golden Bear prize at The Berlin Film Festival. However, after sitting through the beautiful yet vacuous 106 minutes […] 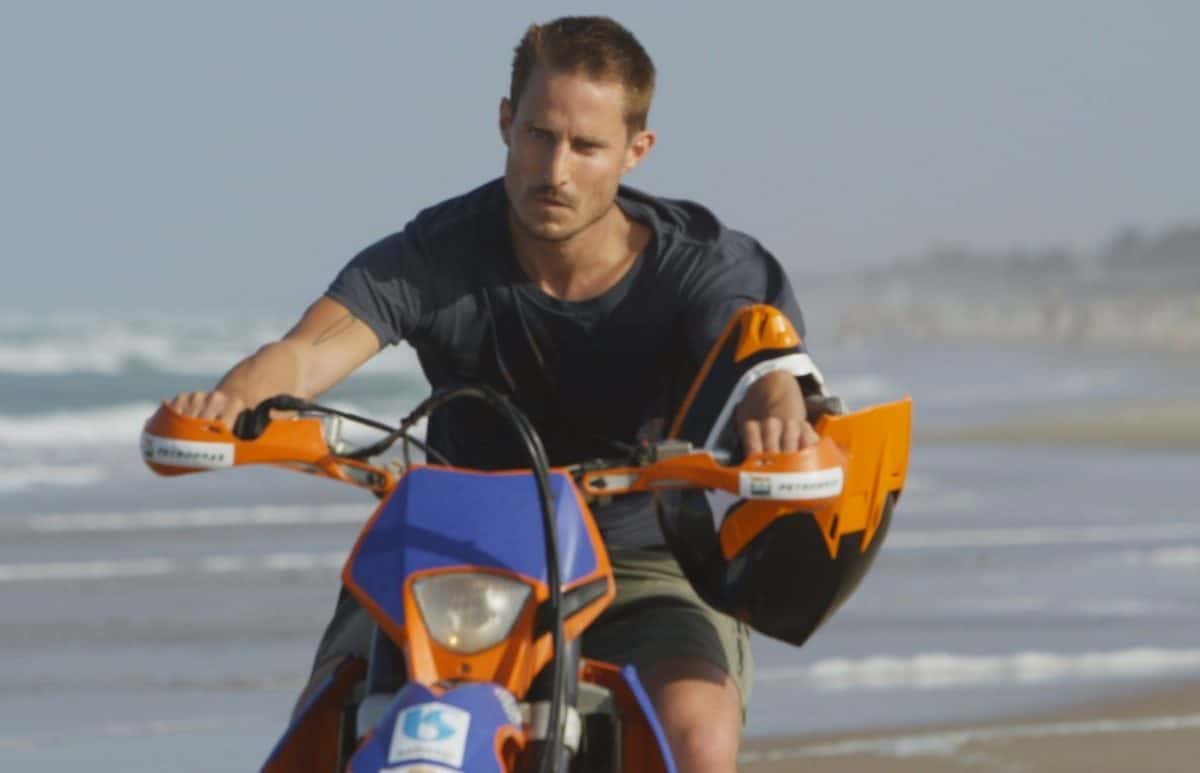 If you have a quick glance at the IMDB page of Futuro Beach director Karim Aïnouz, you would find a substantial amount of award nominations. This includes Futuro Beach being selected for the Golden Bear prize at The Berlin Film Festival. However, after sitting through the beautiful yet vacuous 106 minutes of abstract visuals and bland melodrama, it’s difficult to see why.

Opening with a vigorous opening sequence of vast areas of empty beach, overseen by hulking wind turbines, we follow two men energetically riding motorbikes along the coast before leaving their bikes and rushing towards the sea. It’s then, when the two men disappear out of view and into the big blue, that the film swiftly announces its obvious metaphor of being lost at sea. The film then illustrates this more explicitly. As one of the men begins to drown, a third man, a life guard appears and manages to rescue one of the men.

It’s the first time that the guard, Donato (Wagner Moura), has lost a life and it bears hard on his soul. He informs the survivor Konrad (Clemens Schick) of the tragedy, but the mixture of the incident and Donato’s attraction to Konrad allows Donato fall into lust. Leaving himself and his family behind. Or something.

Future Beach spends so much with its pretentious chapter titles and ponderous, long faces to actually care about giving us people we can stand by. Narratively, the film’s story spans over 8 years, but Aïnouz decides to be clever and chop out the drama. A drunken sing along hints at the sort of angst that often occurs in such a drama. However, such moments are fleeting and the film spends too much of its time with the characters either moping around Brazil or Germany (and it is moping) or hard cutting to aggressive sex. Something the likes of Brokeback Mountain (2005) used to greater contrast and effect. The film’s second and third acts are turgid affairs that are forgotten as quickly as Donato manages to clear his own memory of his former life. That the film is not surprising is one thing (the third act features two anticipated revelations), however, Futuro Beach is frustrating as it does little to add to its themes of loss, longing or family conflict. Characters don’t need to overreact to be entertaining, but the way Aïnouz allows scenes to drearily pass by with little or no real dramatic build is an irritation.

It’s clear that Aïnouz has talent. His keen visual eye picks up the landscapes of both Brazil and Germany in a way that both arrange and block the actors artistically. Aïnouz also has an ear for well picked pop music. The film’s opening is queued with the blazing distorted synth riffs of Ghost Rider by Suicide, while it’s finale gives us David Bowie’s evocative Heroes’ which also has its own subtext of “doomed lovers”. Unfortunately, by the end of the film, my patience for Futuro Beach was also as ill-fated.

Futuro Bach is out in cinemas and on demand from Friday May 8th.