RelatedPosts Film Review: Monsoon Film Review: Cuties Film Review: Tenet Film Review: Koko-Di Koko-Da By Michael McNulty Wake in Fright is a film with a more storied history than most. Credited as the film that kick started the Australian New Wave, it was nominated for a Palme d’Or and is one of only two films […] 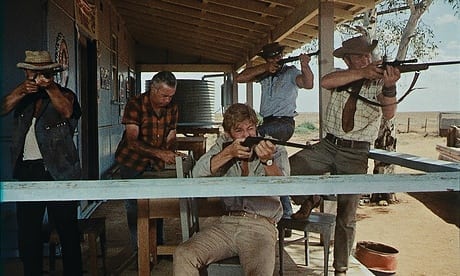 Wake in Fright is a film with a more storied history than most. Credited as the film that kick started the Australian New Wave, it was nominated for a Palme d’Or and is one of only two films to have ever been screened twice at Cannes. Directed by a Canadian, Ted Kotcheff (of First Blood) and scripted by Jamaican born Brit, Evan Jones, the film was celebrated by critics the world over. However, Wake in Fright was widely unpopular with Australia audiences and poor distribution by United Artists saw the film quickly disappear into obscurity. Not until 40 odd years later after Antony Buckley, the film’s editor, found the negatives stored in a box marked for destruction in a Pittsburgh warehouse, ostensibly saving them from the fire pit of forgotten film, was the print restored and the film finally given the attention it so rightly deserves.

Kotcheff’s film is a drunken fever dream that unravels into a sun baked, waking nightmare populated by sweaty, red faced men grinning widely between mouthfuls of warm beer. Seen as a scurrilous and unsympathetic portrayal of the value Australians hold most dear, Mateship, Wake in Fright observes the impact of isolation on civilization and the consequences of uncompromising environments on the human spirit. John Grant’s freewheeling weekend odyssey and quick descent into debauchery is a visceral exploration of the monster within man.

John Grant (Gary Bond) is the pseudo-intellectual, uppity, government bonded school teacher of Tiboonda, a one horse town in a dusty, forgotten enclave of the endless outback. It’s summer holidays and he is leaving for the civilized world – Sydney. Only a train ride, overnight stop, and flight before he is back in the arms of his beloved, Robyn. Or so Grant believes.

Pulling up in the mining town of Bundanyabba, known to the locals as the Yabba, a bigger, dustier enclave in another part of the endless outback, John Grant, with an evening to kill, heads to the pub for a pint. Before long he meets Jock (Chips Rafferty in his last film role), the beer guzzling sheriff of the town, who judges a man’s worth through the speed at which he can put away a pint and asserts his authority through the kind of casual interrogation that is only experienced in a town where everyone knows each other. Grant checks out and Jock proceeds to give him a guided tour of all the Yabba has to offer, introducing the teacher to the game of two-up.

Seduced by the promise of quick cash, Grant decides to give the game a go and a streak of good luck is quickly fouled by a greedy appetite for more and the possibility of buying his way out of his teaching contract. Waking up in the morning with only a dollar and half a pack of cigarettes to his name, Grant finds himself at the mercy of the good people of the Yabba’s hospitality.

Travelling from homes to shacks to pubs and going on a terrifying kangaroo hunt that plays out like a national geographic nightmare, the acrid smell of gunpowder and drunken heinous laughter linger long after the scene has concluded, Grant’s delicate middle class sensibilities are challenged as he slowly succumbs to a darker side he never knew he possessed.

Donald Pleasance puts in a skin crawling brilliant performance as Doc Tydon, a one-time practicing doctor turned full time alcoholic and one third of a trio of Grant’s adoptive drinking mates – the other two, Dick (Jack Thompson) and Joe (Peter Whittle). Pleasance’s Doc is a vile, philosophising, pisshead, sucking down tallboys of flat beer with his freshly fried kangaroo slop for breakfast, his

gross, sweaty, naked potbelly hanging over his trouser line. And yet Kotcheff refrains from painting these characters as villains, they are “decent blokes,” hard working men made from and the consequences of the land they work and the world they live in.

Kotcheff’s attention to detail coupled with Brian West’s cinematography do more than capture a slice of rural Australian life. The sweat, dust and flies, the endless horizons of thick red dirt divided by piercing blue skies and the existential pressure transcend the screen, placing you very much in the thick of this film. Don’t be surprise if you find yourself unconsciously sweating.

Wake in Fright is raw and uncompromising, the “great lost Australian film, so sit tight, have a pint, and give it a watch.