RelatedPosts Film Review: Ropes James Bond star Sir Sean Connery dies Film Review: Shirley Film Review: Mogul Mowgli By Michael McNulty There’s nothing forgettable about In the Mood for Love, but and be honest, when was the last time you thought about whacking it on the DVD player and settling in to watch it on […] 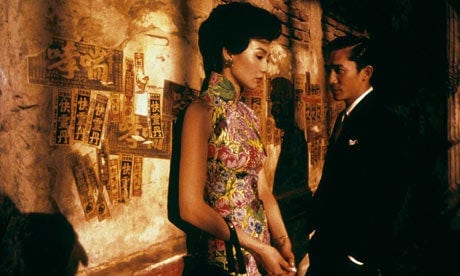 There’s nothing forgettable about In the Mood for Love, but and be honest, when was the last time you thought about whacking it on the DVD player and settling in to watch it on a Friday night?

Released in 2000, Wong Kar Wai’s film was fifteen months in the making and a largely unscripted and improvised affair. It was nominated for the Palme d’Or at Cannes and although it didn’t snag the festival’s top prize, it picked up the Best Actor and the Technical Grand Prize award and went on to become Wong Kar Wai’s biggest commercial success.

Tony Leung with his slicked back hair and suave grey suit, stands in an alley beneath a yellow street lamp, a thick cloud of cigarette smoke hanging in the humidity above his head as a heavy Hong Kong rain thrashes the pavement beneath his feet. A few feet away, the statuesque, graceful, and endlessly sexy Maggie Cheung dressed in her figure hugging, floral pattern cheongsam dresses stands, her too, lit by a yellow street light. So rarely do two actors look so good and their performances carry such nuance.

Their lives have become intertwined before they have even had the time realize it as Chow Mo-wan (Leung), a newspaper editor, and Su Li-zhen (Cheung), an executive assistant, move into neighbouring apartments in Hong Kong circa 1962. Their furniture is being incorrectly dispatched between both flats and the two have to correct and direct the delivery men. Both are married, but it is not long before they slowly realize that their respective spouses are having an affair with each other. And so, they become embroiled in an affair of their own. However, “we will never be like them” says Cheung as an openly sexual relationship is substituted for a dreamy, repressed romance that provides comfort and support.

The film is breath-taking in its visuals. A sensory delight that exploits all that cinema has to offer. Wong Kar Wai paints moving portraits that explode with deep, brooding and mournful colours, browns, reds, greens, blues and yellows, which drip with an untouchable melancholy. It’s an opera of restrained emotion, loneliness, isolation, sadness, anger, desire, passion and so much more.

Hong Kong, it’s crowded, bustling, and sweaty streets is reduced to a handful of characters and the cramped, intimate spaces of apartments, alleyways, and dining room booths that they inhabit. But, these spaces, for all their closeness, are divided by mountains on unspoken and repressed desire.

The exquisite musical theme that accompanies the tableaux like compositions that unfold in slow motion imbues a melancholy that sinks into the skin, enters the blood stream and heads straight for the heart. Nat King Cole softly crooning, “Quizas, quizas, quizas,” suggests in vain the promise of a possibility that they and we, the audience, cling to with a Hollywood born optimistic naiveté. “Perhaps, perhaps, perhaps.” Or not.

In the Mood for Love is a truly beautiful piece of cinema.