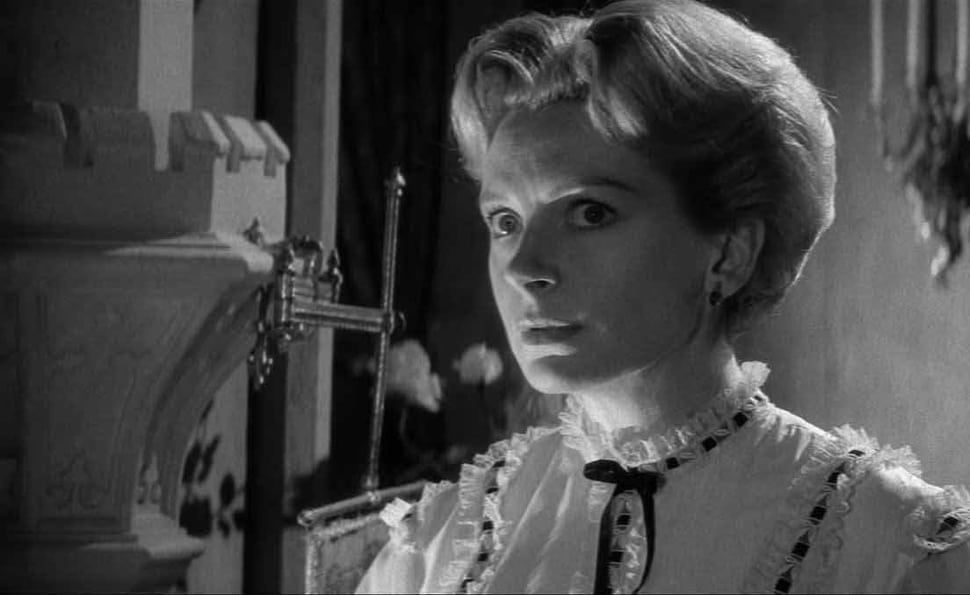 Jack Clayton’s horror classic The Innocents, released in 1961 and based on (by way of William Archibald’s play) Henry James’ 1898 novella The Turn of the Screw, is a mysterious and haunting classic Victorian ghost story. The script, which passed through a number of hands, finally ended up in those of Truman Capote who helped to deliver it in its final form.

Miss Giddens, played with a subtle restraint that belies an underlying sexual repression by an excellent Deborah Kerr, takes charge of Flora (Pamela Franklin) and Miles (Martin Stephens), two orphaned children, from their uncle (Michael Redgrave), a wealthy bachelor who is invested enough in their welfare to ensure that they are taken care of, but not so much that he involve himself with them. Armed with nothing more than a deep love for children (she has no experience with them or any of her own), Miss Giddens heads to a beautiful country estate in Bly and begins her tenure as loving child minder. But, it is not long before things begin to turn spooky, mysteries unearth themselves and slowly Miss Giddens begins to believe the children may be possessed by their former governess and grounds keeper. So follows a nightmarish descent into a ghostly mystery and uncertainty as Miss Giddens struggles to save the children from an evil that may just be a figment of her imagination.

The Innocents forgoes the twist and the theatrics of blood and gore that so often saturate the horror genre, instead it substitutes all this for a suggested horror, one that is hinted at, that is quiet and ambiguous. Clayton mixes Victorian sensibilities and the gothic creating a strange, ominous atmosphere that possesses an underlying sense of death. In one scene Miss Giddens reaches to touch a bouquet of flowers only for the petals to fall from their stems. In another Flora marvels as a spider eats a butterfly and then later a small black beetle falls from the mouth of a statue of a young boy.

Ghosts appear and disappear at the ends of dark corridors and through window panes, as are want to do in haunted houses and these are moments that force a tightening of your grip. However, it is moments captured in the light of day that are the most spine tinglingly frightening. The ghost of the former governess stands in the brush across a pond in the blinding light of the sun, her black dress floating in the soft summer breeze. The day light provides a stark contrast to her death and evil and gives the scene an added sense of horror.

Most terrifying of all though are the children. Stephens and Franklin’s portrayals of the precocious Miles and Flora are unnerving and played with startling confidence and verve and it is never knowing whether they are the victims of the ghosts or in some way aligned with them that creates the most discomfort.

Filmed on CinemaScope, an anamorphic lens used for shooting widescreen, cinematographer Freddie Francis was inventive, painting glass panes and placing them over lens so as to distort the corners of the frame and direct attention. The result heightens the stifling, eerie atmosphere and shadowy claustrophobia of the large gothic house in which most of the action takes place.

The Innocents is English Gothic at its best. Give it a go and see for yourself.