Horror, as a genre, is steeped in metaphor. Horror can be about politics, sex, disease, but it’s usually – when you get down to the bottom of it – about fears more real and more universal than vampires or zombies. The Dark Half isn’t exactly like that, in fact it may be one of the […]

Horror, as a genre, is steeped in metaphor. Horror can be about politics, sex, disease, but it’s usually – when you get down to the bottom of it – about fears more real and more universal than vampires or zombies. The Dark Half isn’t exactly like that, in fact it may be one of the most straightforward, face value horror films I’ve seen.

Based on the novel by Stephen King, the film follows author Thad Beaumont (Timothy Hutton). Thad’s books are literary and serious, but his lurid bestsellers are written under the name George Stark. When a man threatens to reveal his identity, Thad calls his bluff and reveals himself as Stark, killing off the pseudonym rather than paying the ransom. Soon, people around Thad begin to be brutally killed. The sheriff (Michael Rooker) thinks it might be Thad, but Thad insists that it is his alter-ego George Stark – angry about being killed off – who is the killer.

If you know anything about Stephen King then it’s fairly obvious how surface level The Dark Half is. In the 70s and 80s King published several books under the name Richard Bachman, with a picture of his agent as the author’s photograph. King wasn’t blackmailed, just discovered (he didn’t hide himself particularly well to begin with), but it’s clear that The Dark Half is a simple literalisation of the battle between his two authorial personae. This is probably why The Dark Half is a film that feels much more marked by the author of its source novel than it does by the writer and director of the adaptation.

Even if George A. Romero had stopped after his first film, Night of the Living Dead, he’d be one of the most significant directors in the history of horror cinema. 50 years later, that film continues to resonate politically and has been long respected as the genre founding classic it was. It’s also a film that, for me, Romero never lived up to. Martin, his revisionist vampire/serial killer film is also great, but otherwise I’ve just never been much of a fan. The Dark Half finds Romero on director for hire form. The most memorable images here don’t feel very original (the use of birds in a horror context calls Hitchcock readily to mind anyway, but Romero seems to lean in to that comparison with his frames), and there doesn’t seem to be a definitive authorial stamp here. I have to wonder how someone like Wes Craven, who always seemed conflicted about his identity as a horror director, would have handled this material. In fact, the film shares more than a little with Craven’s New Nightmare (1994) in the way it brings a fictional creation into the real world. Tellingly, in New Nightmare, Freddy appears because Craven doesn’t want to tell stories about him, while here Stark manifests because Thad, deep down, still wants to live vicariously in his world.

King’s storyline and Romero’s screenplay have interesting ideas about the relationship between a writer and his work. This is territory King also visited before The Dark Half. In Misery he looked at the relationship between writer and fan, also from the dark side of that relationship. Here he drills into the dark subconscious that a horror writer must explore, physicalising it as a monster that threatens to destroy everything good and normal in the author’s life. In this way you could also see the central metaphor as being about King’s once ragingly intense cocaine habit; a real dark side that, unlike Bachman, could have taken total control of his life. The real question of The Dark Half, though, is whether we want to let go of our dark sides. Thad’s dark side makes him money – his literary novels sell, but they take a long time to write, while the Stark books flow out of him fast and make more money. This is not the greed is good cinema of the 80s, rather Thad’s profitable dark half exacts a price when he tries to kill it. 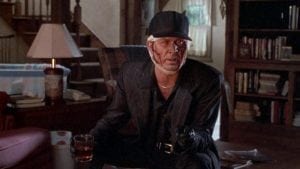 The ideas, ultimately, are more interesting than the film. Timothy Hutton is solid enough as Thad; the decent family man is something he’s well suited for, but he’s much less ideally cast as the evil Stark. Hutton hams up every scene as Stark, but it’s towards the end, when he’s bandaged up and under a layer of prosthetics, that he really goes overboard. I see the logic of casting Hutton in both parts – Stark is his dark side, after all – but it would make sense in this case to have a different actor in the role. Thad doesn’t put his picture on the books to represent Stark, so it would make sense that he wouldn’t see his alter-ego with his own face. There were plenty of actors in 1993 who could have made a great dark flipside to Hutton (in fact Michael Rooker, here cast as the sheriff, is one of them).

Unfortunately, The Dark Half is plodding and overlong at 121 minutes. It grinds through the various expected beats as Stark kills in a pattern that brings him ever closer to Thad and his family (his wife played by Amy Madigan and their twins, who aren’t yet a year old), the gore isn’t even especially imaginative, though it is well executed, particularly in the finale. The supporting cast are doing perfectly decent work here but are often underserved by the material. Amy Madigan, a talented actress, is stuck in a thankless wife role and Michael Rooker, while his soft-spoken performance is fine, also only has cliches to play.

There is enough here that is interesting to make me want to read King’s novel, or see a remake, but while what’s behind it is interesting, for me The Dark Half was a film that failed to play to its greatest potential strengths.