I was just the right age (8) when the cartoon series Teenage Mutant Hero Turtles started being shown on British TV (the word ‘ninja’ was removed from the UK version of the show, in one of many hilariously petty incidents of censorship that dogged the franchise on these shores). I quickly became an obsessed fan. […]

I was just the right age (8) when the cartoon series Teenage Mutant Hero Turtles started being shown on British TV (the word ‘ninja’ was removed from the UK version of the show, in one of many hilariously petty incidents of censorship that dogged the franchise on these shores). I quickly became an obsessed fan. I watched the show religiously, I had the toys, I would play Turtles with my friends and my four year old brother, my Mum even made costumes for me and my brother.

In November 1990, when I was 9 and Turtles mania was peaking, I remember being taken on a surprise trip to London, my first trip to a big cinema (either the Empire or the Odeon Leicester Square) to see the live action film. I LOVED it as a kid, it was everything I’d ever wanted the Turtles to be and in all honesty, it holds up even today. The first film has a surprisingly gritty vision of New York, fantastic animatronics and stunt work to realise the Turtles and their fighting style, a simple but effective story and decent performances from Judith Hoag and Elias Koteas as April O’Neil and Casey Jones. It’s still a fun watch.

I wonder whether the fact that my Turtles fandom didn’t last very much longer was down to the second film, which came out in the UK just nine months later. It’s a sillier, more kid oriented film, that ends with a whimper when Super Shredder collapses a bridge on himself and dies. It was a contrast to the down to earth take that made the first film feel like I was watching something a little more grown up. Whether it was that disappointment or just the fact that, at 12, I had simply grown out of what the kid friendly version of Ninja Turtles was, I never saw 1993’s extremely poorly received and widely fan despised Teenage Mutant Ninja Turtles III. I watched it for the first time for this column.

You can tell within minutes that Teenage Mutant Ninja Turtles III is going to be not just another step down for the franchise, but an absolutely dire film. Much like the Turtles themselves, the films seemed to undergo a progressive mutation: from the comic book influence of the first film, to the attempt to square the circle between the comics and the cartoon in the second, to going full cartoon in this installment.

At $17 million, the film cost a little more than the first, but considerably less than the sequel, and it seems that the savings were made in exactly the wrong places: the Turtle costumes. The second film had begun the process of brightening the skin tones of the suits. The third film pushes this much further, the Turtles are BRIGHT green and the dark spots on their skin, previously shaded and blended, now look like they have been painted on as thick as possible and make the main characters look like they are suffering from some amphibian version of chicken pox. The Splinter puppet is equally poor, not only does it look cheap, it’s only half a puppet. To save money only Splinter’s body and head were built, and his legs are always hidden behind something or framed out of shot.

All this awfulness comes before we begin to discuss the articulation and voicing of the characters. The animatronics on the first two films were excellent, with particularly good articulation of the Turtles’ faces, so it was credible that they were talking. Here the mouths seem to have a reduced number of points of articulation, but what’s even more distracting is that they move in a staccato fashion. If the heads in the previous films managed to convey the illusion that the characters were talking, here the impression is very much one of watching someone offscreen pull wires, at least when the effort is even put in, there are many moments in which, though the Turtles faces are clearly visible, their mouths do not move at all. It’s not the sort of miserable low that the costumes for the Turtles’ live music tours (yes, those were a thing) would hit, but it’s a huge step down. The problem also extends to Splinter, whose voice sounds like a dad who doesn’t really do voices trying to do a Splinter impression to get his kid to go to sleep.

I should probably talk about the plot, which is at once dumb and somewhat over-complicated for the six to eight year olds that this film is clearly pitched at. The film begins with April (played since the first sequel by Paige Turco, who looks more like the cartoon’s April, but has much less personality in the the role than Judith Hoag) buying the Turtles gifts. For Splinter she gets what looks like an old torch with an hourglass where the wick ought to be. It turns out that this device transports her back to feudal Japan (I know, I’m also sick of things I get at the flea market sending me back in time), trading places with a Prince who is against his Father’s alliance with the British. The Turtles go after April, trading places with four priests and get caught up in the rebellion against the local commander, who has teamed up with the British to try and keep hold of his power. At first the Turtles are feared as ‘demons’, but soon they are aiding the rebellion, and Michelangelo has taken a shine to rebel leader Vivian Wu. Back in New York, Casey Jones (Elias Koteas, returning having missed the previous film, wearing an awful wig and looking like he wants to use his hockey stick to separate his agent’s head from his neck) stays in the sewer with Splinter to look after the priests, while in Japan the Turtles come across a warrior who reminds them a lot of Casey (a shaven headed Koteas). In all honesty, the plot is nonsense and its British villain (a terrible performance from Stewart Wilson) is a non-entity.

The fight scenes are where this film ought to excel. Who wouldn’t want to see the Turtles in full Samurai gear, with authentic period weapons, kicking ass in order to rescue ordinary people from the lords running the feudal system? There are a few impressive moves, but like the rest of the film, the fights just feel slapdash, with a lot of missed blows and dull choreography. In the first film particularly, it felt like the stunt team put a lot of time into figuring out exactly what was possible in the suits, and how to utilise the moves they were able to pull off. These sequences look like the result of a compromised prep period. Whether the suits came in late, pre-production was short due to budget restrictions or the stunt team simply wasn’t as experienced or talented, the cut corners show here just as they do in the rest of the film. 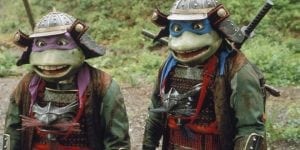 I’m aware that this is barely a discussion of Teenage Mutant Ninja Turtles III, but that feels oddly appropriate. The film itself is an afterthought; one last attempt to milk a cash cow that, by 1993, was receding massively in relevance, replaced in the affections of its audience by the Power Rangers. The whole enterprise feels desperate. It’s a shame, because with more time between the previous film and this one, and a genuinely great concept in sending the Turtles back to an important point in the lineage of their martial arts, this could have been a great culmination of and send off for this iteration of the franchise.

Of course the Turtles franchise has continued, with several TV shows, an underrated CGI animated film in 2007, and a pair of Michael Bay produced reboots beginning in 2012, which are mixed bags at best. They’ll be back again, and here’s hoping that when they are they might do justice to the central idea of this abject failure of a film.