I was always a movie guy. We had consoles (a Sega Master System, followed by a Mega Drive) in the house and I did play them, and some PC games, when I was a kid, but gaming was my brother’s thing. Despite that, and despite the fact we never had a Nintendo console, I was […]

I was always a movie guy. We had consoles (a Sega Master System, followed by a Mega Drive) in the house and I did play them, and some PC games, when I was a kid, but gaming was my brother’s thing. Despite that, and despite the fact we never had a Nintendo console, I was very well aware of the Mario Brothers. I had played the games only briefly (and badly) at friends houses, but I knew Mario (played by Bob Hoskins) was the plumber in the red overalls with the big moustache and that Luigi (John Leguizamo) was his taller brother and wore green. I knew about Princess Peach, who they always discovered was in another castle after reaching the end of a level (Princess Daisy, from Super Mario Land is used in the film) and I knew what Koopas, Goombas and Bob-ombs were. Super Mario Brothers, its sequels and spin offs weren’t just console games, they were a genuine piece of our culture. A movie adaptation must have seemed like a can’t miss deal.

Computers and computer gaming had, of course, been featured in cinema for years, in films as varied in their approaches as Tron, War Games, The Wizard and Weird Science, but Super Mario Brothers was the first time that a game had been directly adapted for the screen. It did not go well.

There have been plenty of films that have gone through troubled production processes, some classics were nightmares to make, other awful productions resulted in experiences that were almost as terrible for audiences. Super Mario Bros. seems, from its inception, to have been a special circle of filmmaking hell. The script went through many versions, ranging from what sounded like a reasonably literal, if comedic, take from Jim Jennewein and Tom S. Parker to a couple of darker and more action oriented versions by Dick Clement and Ian LaFrenais and a studio mandated more Disneyfied approach from Ed Solomon and Ryan Rowe. Eventual directors Rocky Morton and Annabel Jankel (hired on the strength of their TV show Max Headroom) favoured a darker vision for the film; a sci-fi dystopia in which they never wanted Mario and Luigi to wear their iconic video game costumes. The studio, on the other hand, seemed keener kid friendly action blockbuster that would appeal to the game’s core audience. The so called rainbow drafts that ended up as the shooting script seemed to have tried to square this circle. The screenplay apparently was in such flux that Dennis Hopper (who played King Koopa after Arnold Schwarzenegger and Michael Keaton passed) said that he ended up paying no attention to it, and simply doing the scenes as they were handed to him. Watching the film, this isn’t a surprise.

Super Mario Bros. is a film that seems not to understand the property it is based on or, much more damagingly, the kind of film it wants to be. There are vestiges of a goofy blockbuster here, but the downbeat tone and design that runs to a battered dystopia that is equal parts Blade Runner, Mad Max, and Total Recall rather than the cartoony visuals of the games series makes them sit awkwardly in the movie. This is particularly true when the film wants to evoke the games. Mario and Luigi’s bold red and green overalls (which they don, for no reason we are clued in to on screen, over an hour in) feel totally out of place in the film. There is no indication of where they come from, how difficult could it have been to show them as uniforms worn by maintenance workers in Dinotopia? This is also the case with cartoony props like the Bob-omb, the one mushroom that Mario uses during the film or the briefly glimpsed Bullet Bill, they feel entirely out of place in the film’s world, and it’s easy to see Morton and Jankel’s lack of enthusiasm for them, because they barely address even the limited elements of the game that they do include. 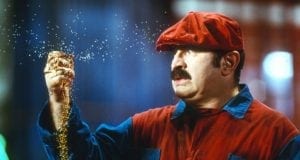 The Super Mario Bros. games may not have had an especially deep storyline, but what they did possess was a richly developed set of worlds and an abundance of mechanics and props that could have been excitingly exploited in a movie. The thwomp-stomper boots, for instance, seem to have been written in to explain why the game version of Mario jumps on his enemies to knock them out, but that’s never carried through. Even when he’s above a goomba and has to drop in to a room to rescue Daisy (Samantha Mathis) and some other women including his girlfriend, the film never has Mario stomp on an enemy to dispatch them. The mushrooms that grant Mario special abilities in the games are represented through a fungus that runs throughout the parallel world the brothers and Daisy are transported to, but they are used only once, and fire flowers and othe power ups are completely absent from the film. The missed opportunities are obvious and disappointing. Imagine, instead of a climax involving repainted SNES Super Scopes being shot at Koopa, a confrontation between him and Mario, who has used a growth mushroom and a fire flower. The there is such room here for new and fun visuals, but they are repeatedly shunted aside for a film filled with things we’ve already seen done a great deal better.

We’ve covered in some detail what Super Mario Bros. isn’t, but what is it? It’s a mess. The idea is that instead of the dinosaurs becoming extinct 65 million years ago the meteor that crashed to Earth actually split reality, with dinosaurs evolving into humanoid creatures in an alternate dimension. Mario and Luigi get swept into this reality when Luigi’s would be girlfriend Daisy is kidnapped because Koopa believes she is a long lost princess who is the only one who can fuse the missing piece of the meteor with the rest of it, merging our dimensions for him to rule.

On its own terms, messy though it is, Super Mario Bros. isn’t quite a complete disaster. Dennis Hopper may have been a total nightmare to work with, and have had little clue what he was doing, but he does sometimes come up with a gem in his delivery. One great moment finds Koopa in a mud bath (why? Well, that’s something you should get used to asking in this film, as is the fact you’ll never get an answer) “You know what I like about mud?” he says, “It’s clean and it’s dirty at the same time”. I like to think that was a brief moment of lucidity in which Hopper ad-libbed. Also impressive, though hardly faithful to the look they had in the game, are the animatronics for the goombas, they are fun and have real personality, especially the one that is ‘de-eveolved’ from Toad (who is nothing like the game character). 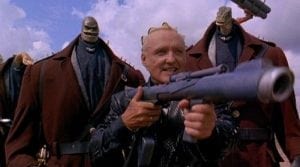 Unfortunately for every little thing that does work there are several big things that don’t. Chief among these is the frankly baffling casting. The first person approached to play Mario (in a deal that would also have seen him direct) was Danny De Vito, Tom Hanks apparently wanted the part and Bruno Kirby was also offered the job, but turned it down. Bob Hoskins looks the part, but his absolute misery on set is very clearly visible and his broad performance seems out of whack with the version of the film that Morton and Jankel seem to be aiming for. If you were casting the brother of Bob Hoskins, who was playing an Italian-American character, your first call would obviously be to John Leguizamo, right? The juxtaposition is absurd, again, in the weird cartoon comedy version of the film this might have been okay, but it simply doesn’t work in a film that begins by trying to ground itself in a real New York and then work as a reasonably dark dystopian sci-fi. Samantha Mathis, who made a strong debut in 1990’s Pump Up The Volume and gave a great lead performance in a film we’ll be looking at in a couple of weeks time, looks permanently confused as Daisy. She doesn’t have much to do (an insanely optimistic closing scene hints she’d have had more action and agency in the sequel), and to be fair to her I doubt anyone could have been good given the chaos of the production and the anemic part, but it is amusing to watch her in scenes opposite Dennis Hopper and the puppet of Yoshi and try to decide which she found more of a challenge to act with.

The studio, as well as something more accessible to the kids who played the games, clearly wanted something funnier and it seems that is where Fisher Stevens and Richard Edson came in as Koopa’s idiotic spies, sent to kidnap the lost Princess, who have managed to get the wrong person five times before taking Daisy. Again, in the cartoony version of the film their schtick might have been slightly less grating, but here it makes no sense and is intensely annoying.

The screenplay trouble shows through not just in the tone but in the lack of connective tissue. There are plenty of scenes in this film, but the way it moves from one to the other is haphazard and often confusing, speaking to the huge swathes that were apparently cut from the film without Morton and Jankel’s involvement (it’s also said that parts of the film were unofficially directed by cinematographer Dean Semler, though it’s hard to tell how true that is through the slow motion car crash unfolding on screen). The nonsensical storytelling is clearly something that was recognised, and attempts are made to patch the the film up through huge amounts of hilariously obvious ADR.

There is likely a book to be written on the production of this film – the fact that Hoskins and Leguizamo were apparently often drunk, the fact both can at some point be seen wearing casts from injuries sustained on set, the behind the scenes battles endured by the directors – you just wish that the experience of watching the film could be as interesting as that book sounds. I think people went into this film with the best of intentions, but it’s clear from what we ended up with that they didn’t understand the property they had and the result was an approach akin to throwing darts and using every idea that was hit. I can’t recommend the film as an entertainment, but it’s interesting as evidence of a creative process gone all the way off the rails.

Video game movies haven’t become renowned for their quality since Super Mario Bros., but this is still close to the nadir of the genre. It’s a pity, because there clearly is an entertaining movie to be made from the games, it’s just not the one that ended up being made.