It seems that every comedian with a movie or two under their belt turns pretty quickly to the romantic comedy, and with good reason. The rom-com is a fascinating genre, at once rigid in its long established rules and structure, yet infinitely malleable in the genre hybridisations that can be created within it. Mike Myers’ […] 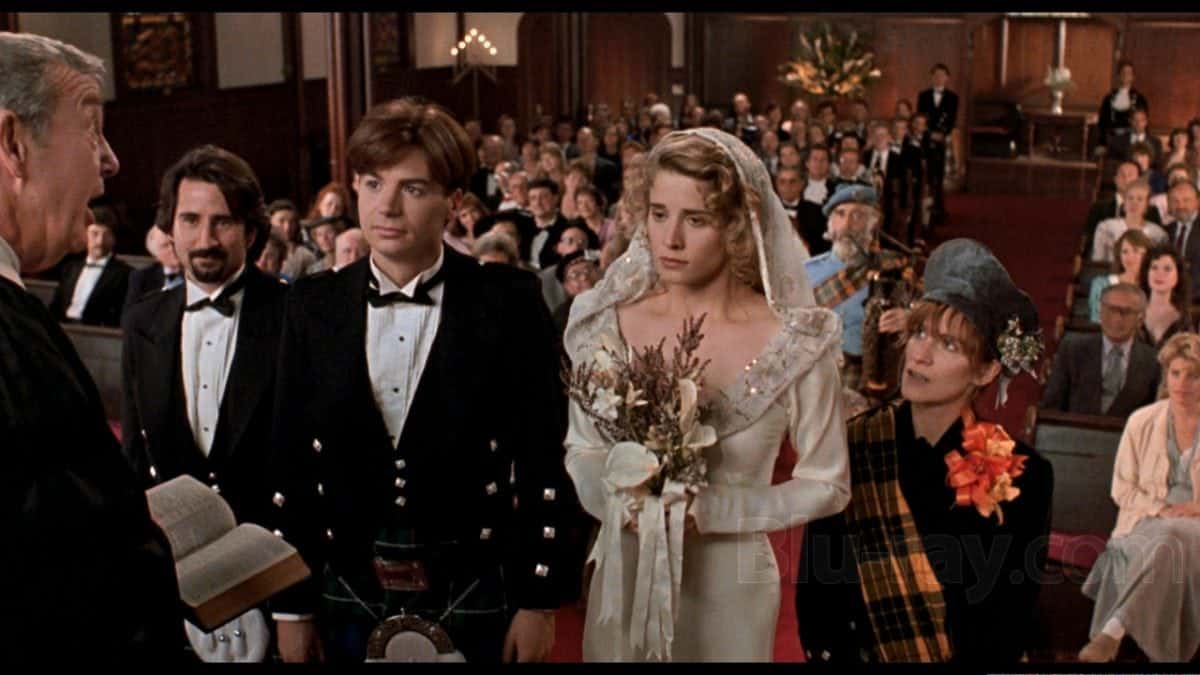 It seems that every comedian with a movie or two under their belt turns pretty quickly to the romantic comedy, and with good reason. The rom-com is a fascinating genre, at once rigid in its long established rules and structure, yet infinitely malleable in the genre hybridisations that can be created within it. Mike Myers’ attempt at this most mainstream of genres, So I Married an Axe Murderer, its title might suggest, falls on the darker end of the spectrum. Watching it though, there is a curious cognitive dissonance about the film, as if it can’t quite pick a lane and commit to it.

The film finds commitment phobic poet Charlie McKenzie (Myers) falling for local butcher Harriet (Nancy Travis), but as he learns more about her, Charlie becomes convinced his new love is Mrs X; a serial killer who has murdered three husbands on their honeymoon night. Charlie’s detective friend Tony (Anthony LaPaglia) convinces him he’s being paranoid, and Charlie proposes to Harriet, but has he made a fatal mistake?

Mike Myers is not the person you would immediately think of as a rom-com lead. This film tries to fit him into a quirkily charming box, but Myers had made (and after this would continue to make) his career as a grotesque, using his rubber face to contort himself into characters. Only his Wayne’s World host Wayne Campbell was close to what would be defined as normal, but even he was more a collection of exaggerated observations about grunge culture than he was an actual person. As So I Married an Axe Murderer’s Charlie McKenzie though, Myers is trying to convince as that one neurotic but funny guy you know. It doesn’t really work. Part of the problem is that we never believe in Charlie as a real guy. He seems to have a fairly comfortable life – so much so that he can take a day out of his schedule without consideration to help Harriet in her shop so he can have a chance to flirt with her – but he seems to have no work outside performing his (awful) beat poetry at a series of open mic nights. I know we’re in the 90s, and we’ll soon see the cast of Friends maintain huge apartments on what must be ludicrously small salaries, but still, the question of how Charlie survives niggles here.

A more pressing problem is that, stripped of his armour and seen almost entirely as ‘himself’, Myers seems to be forcing the comedy (and the charm) into scenes that land with a whimper and grate rather than amuse when he’s trying to set up a catchphrase (“Hello!”) or go into a comedic bit. We do see Myers get to play the grotesque here. In a dual role as Charlie’s father we get an early and less parodic version of Myers’ riff on his own dad, which would later evolve into Fat Bastard and Shrek. This is probably the best version of that character, as there is – once – room in the script for Myers to find in that character something beyond shouting in a silly accent (which isn’t to say that’s not funny, at least for a while).

When the comedy does hit it’s largely in the side story of LaPaglia’s detective, frustrated because his life isn’t what he thought it would be from watching cops on TV and in movies. In the film’s best running gag, frustrated because his boss (Alan Arkin) is too nice, too supportive, Tony asks him if he can be more like the Captain in Starsky and Hutch “You know, when you come in, and you haul me into your office, and you bawl me out because you’re sick and tired of defending my screwball antics to the Commissioner? Why can’t you do that?” LaPaglia and Arkin play this storyline brilliantly straight, and the writing (Arkin’s explanation of the fact he doesn’t report to a Commissioner, for instance) is always laugh out loud funny, without resorting to the crutch that Myers uses of Charlie always laughing at his own jokes.

While Myers charm feels forced at times, Nancy Travis – an actress unjustly overlooked these days – doesn’t have that problem. She’s ideal as Harriet; luminous, but with a quality down to earth enough that she doesn’t seem out of place when we first see her behind the counter at Meats of the World, as Sharon Stone or Kim Basinger, who were both in the frame for the part, might have. Stone was actually cast, but pulled out when she wasn’t allowed to also play Harriet’s sister Rose, which eventually went to Amanda Plummer, who is as off-kilter as ever. Travis, for her part, always seems like she’s having fun here, taking joy in the improvisation with Myers and in winking just a little at the camera during the moments we’re supposed to suspect she is the killer. If we ever believe in Harriet falling for Charlie it’s largely because we see Travis being amused and charmed by Myers.

By most accounts, So I Married an Axe Murderer wasn’t an especially happy or trouble free film to make. Robbie Fox gets sole credit for the screenplay, but his work was heavily rewritten by an uncredited Myers and Neil Mullarkey and there was friction over the final credits. There was also talk from director Thomas Schlamme (who would go on to be a producer and key director on The West Wing) that there were ‘personality clashes’ with Myers, who has often been said to be a difficult and controlling collaborator. The film, to some degree, bears this out for me. It feels as though there is a constant fight between, on the one hand, the darkness of the central idea which has blackly comic potential when combined with the concept of Charlie’s often spoken about, but never explored, fear of marriage and on the other generic jokes like Charlie’s riff about being given a very large cup of coffee, a gag as bland as a Starbucks Americano.

There is a darker, funnier, film here. It would probably lean more on Tony investigating his friend’s new girl, with Charlie disbelieving because Harriet seems so straight out of central casting for the nice girl next door. Of course, I shouldn’t be writing about that film, because it’s not the one that got made. While there are moments that amuse (cameos from Charles Grodin and Stephen Wright, for instance), there is a gaping hole at the centre of So I Married an Axe Murderer and that’s the fact that Myers simply doesn’t convince. The film never gets over this, and so there it sits, this odd anomaly in his filmography and in general.

In a way, the film as a whole is exemplified by one choice: the theme song. Throughout, we hear the track ‘There She Goes’. I love this song, in its original version by The La’s. Sadly the film begins with an abysmal cover version of it by The Boo Radleys (you remember the name from Wake Up Boo. Spotify it, I’ll wait), then later we hear the original in all its jangly Liverpudlian glory. Like the film, the song is a darker text (it’s about heroin) that has been misread as something much jollier. It’s more than just the choice of song though, So I Married an Axe Murderer has comedic moments that hit with a precision that, like the La’s version, makes me ridiculously happy, but much as including the original ‘There She Goes’ feels like an afterthought, those great comic beats only come in the side story. The main thrust of the film, like the version used as the theme tune, feels like a weaker version of something we know has greater potential.