High concept was a buzzword in 90s Hollywood, and they don’t get much higher than Indecent Proposal’s. David and Diana (Woody Harrelson and Demi Moore) are high school sweethearts who have been pretty happily married for seven years. Things seem to be going well; she’s in real estate, he’s an architect and they’ve just started […]

by Sam Inglis
in Articles and Lists, Film, Flashbacks To 93, Promoted

High concept was a buzzword in 90s Hollywood, and they don’t get much higher than Indecent Proposal’s. David and Diana (Woody Harrelson and Demi Moore) are high school sweethearts who have been pretty happily married for seven years. Things seem to be going well; she’s in real estate, he’s an architect and they’ve just started building their dream house. Then the recession hits and, down to a borrowed $5000 and with the bank calling in the loan and about to repossess the home David is building, the two go to Vegas hoping to make the money they need. They win to begin with but, eventually, lose it all. While at the casino, Diana catches the eye of billionaire John Gage (Robert Redford), who offers the couple a million dollars for a single night with Diana.

In 1993 I had just started reading film magazines each month. I remember the coverage of Indecent Proposal centering on the salacious question of the film: “What would you do?” If it was YOUR wife, would you take the money, would you let her do it? How I recall the question being posed in the coverage tells us a lot about Indecent Proposal. Its real theme, looked at today, seems less about a moral dilemma and more the idea of ownership.

Diana is absolutely seen as a commodity, and while the film attempts to give her agency, she is largely played as something to be traded between men. Over a game of pool, Gage first raises the idea of the million dollar deal, it is David he turns to, as if Diana is his property, to be leased to Gage for the duration of the contract. It’s interesting that when the question is finally asked of David, Diana replies: “He’d tell you to go to hell”. Yet Gage presses on. “I didn’t hear him”. The underlying tone is always clear—this is a deal between men.

It would be easy to accuse the film of misogyny, but it may not be that simple. It’s worth bearing in mind that the screenplay is by Amy Holden-Jones, who directed 1982’s Slumber Party Massacre; an early feminist parody of slasher films. It is certainly true, and was probably true to an even greater extent in 1993, that society is often given to seeing women—particularly beautiful women—as either prizes or commodities. This is especially true of Redford’s John Gage. He first sees and admires Diana as she is trying on a dress that she can’t afford and then asks David for her company to bring him luck at the casino tables. He sees her as a bauble, a beautiful adornment to stand next to him and impress and intimidate others just the way his wealth does. He gives a practical demonstration of the philosophy he lays out for David and Diana as they play pool; that given his level of wealth, it is possible to buy just about anything, and the price is always negotiable. “For a woman like Diana I could have gotten you at least two million.” 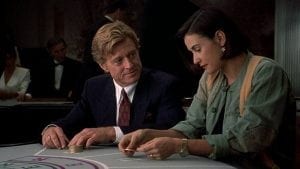 The troublesome sexual politics are probably the most interesting aspect of Indecent Proposal, and I think it’s safe to assume Holden-Jones doesn’t agree with Gage’s Trumpian thinking. While watching Proposal again for this piece, I also often thought of the prominence of ‘yuppie horror’ in the late 80s and early 90s. A lot of these films (Pacific Heights, Unlawful Entry, Single White Female) were to some degree about home invasion. There are unmistakable echoes of that theme here, though more insidious than literal. After he and Diana spend the night together, Gage is a constant in David and Diana’s home and minds. The violation of their marriage he passively allowed torments David, in many scenes, it’s almost as if Gage is standing just off screen, a looming presence in their lives. The invasion becomes literal, and closer to home, when Gage buys the land David’s dream house sits on out from under him, destroying the whole reason they went through with the deal. Ultimately, Gage has taken away David’s two most precious pieces of property.

The supporting cast is limited to Oliver Platt, finding a fairly amusing middle ground between affable and slimy as David and Diana’s lawyer. The rest focuses completely on David, Diana and Gage. Demi Moore was never best known for her exceptional acting skills or vast range, but she gives one of her best performances here. It may have made the sex scenes awkward, but the fact she and Harrelson were friends makes for a believable dynamic between them. We get a sense of the history behind David and Diana’s relationship, and feel that they genuinely like each other and have fun together.

Many of Moore’s best moments are silent. There is more in the way that she often shows Diana is aware she’s being noticed than in many of the dialogue scenes. There is power in beauty, and Moore, like Diana, is clearly aware of and able to use that power. It would have been easy to show her as the manipulator, but while Diana clearly understands the effect she has, she seldom plays up to it. Given that her beauty is so central to the film, it’s worth noting that Moore may never have looked better on screen than she does here, and that when Gage first notices her and when he calls her over to be his mascot, Diana is casually dressed and wearing what looks like very little make-up.

Woody Harrelson is interesting casting for David, a role many actors were considered for before him. Offers went to John Cusack, Johnny Depp and William Baldwin, among many others. Harrelson has more edge, a more unpredictable presence, than many of those actors. Harrelson’s ease with comedy helps in the early scenes of David and Diana’s marriage, but he’s an adept enough dramatic actor to carry off the scenes after Diana’s night with Gage and enough of a live wire to make you think, in the third act, he might be capable of a darker turn that would shift the film into yuppie horror territory. Sometimes, like Moore, he’s not brilliantly served by the script, which has a tendency to get a little overblown as the film goes on, but he acquits himself well in a role he clearly wasn’t the first thought for.

An early idea was that Indecent Proposal should be a star vehicle for Tom Cruise and Nicole Kidman, with Warren Beatty as Gage. I could see Cruise and Kidman working, but Beatty would, I suspect, have unbalanced the film. We believe in David’s jealousy, and in Diana’s eventual interest, because Gage is played by Robert Redford. Redford, 57 when the film was made, is still incredibly handsome, but that’s only half the story. There were plenty of good looking men of the right age for the part of Gage in 1993, but while Beatty could look the part he wouldn’t have had the same magnetism. Beatty seems too slimy for Gage. Redford works because he comes across as genuinely charming. When he first proposes the deal and David assumes it is hypothetical, his “let’s say it’s not” is one of many moments that could feel horribly sleazy, but Redford’s delivery is perfectly pitched. You understand how easily Gage shifts the conversation on to those grounds. This Gage as the character you imagine Donald Trump believes he is, practicing the true art of the deal. I can picture any number of other actors as David or Diana and imagine the film being no better or worse, but Redford is the only person I could imagine walking the tightrope of playing Gage as well as this.