In 1993, Sylvester Stallone was going through, shall we say, a challenging period. He’d had a few box office disappointments. The Rocky series seemed to have played itself out with 1990’s poorly received fifth entry, and Stallone had attempted to shift into comedy, making disastrous choices in Oscar and Stop Or My Mom Will Shoot! […]

In 1993, Sylvester Stallone was going through, shall we say, a challenging period. He’d had a few box office disappointments. The Rocky series seemed to have played itself out with 1990’s poorly received fifth entry, and Stallone had attempted to shift into comedy, making disastrous choices in Oscar and Stop Or My Mom Will Shoot! The latter is one of Hollywood’s great practical jokes, as Stallone’s longtime box office rival Arnold Schwarzenegger pretended to be interested in making the film to get Stallone to ‘swipe’ it from under him. Of course a few years later Arnie made Junior in earnest. Still, as ways to mess with a rival go, it’s a strong move. The upshot was that Stallone’s career clearly needed a recalibration.

In 1993 Stallone released two films. The glorious action sci-fi satire Demolition Man was by far the more radical. Cliffhanger, by contrast, was nakedly designed to put its star back doing what he did best. It’s uncomplicated by design, and that’s reflected right down to the imagery used to sell it. The poster is the tagline, boiling the film down to two words: HANG ON. The only other things on the poster are STALLONE, the film’s title and a tiny silhouette. It’s a striking image that promises a back to basics thrill ride. The film delivers.

Stallone plays Gabe Walker, a mountain rescuer who had left the job behind after losing his colleague Tucker’s (Michael Rooker) girlfriend in a tragic accident. The day Gabe returns to ask his girlfriend (Janine Turner) to leave with him, a gang of thieves led by Eric Qualen (John Lithgow) has crashed in the mountains, and needs help finding the $100 million proceeds of their mid air heist. Gabe and Tucker end up captured by the gang, with their lives on the line along with the money. 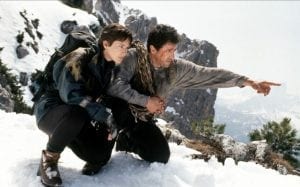 The first thing that strikes you about Cliffhanger is the scale of it. This, in many ways, is how it feels like a product of its time. Jurassic Park was about to change the game, the CGI revolution was just around the corner, but Cliffhanger is almost entirely practical. Shot mainly in Italy, on location in the Alps and at Cinecitta studios, the film often looks terrifyingly perilous. Among the very first images after the credits is a long helicopter shot that discover Michael Rooker and Michelle Joyner stranded on a peak. There’s no trickery here, but for hidden harnesses keeping them safe. That’s really the actors, that’s really a helicopter circling them and they are really 10,000 feet from the ground. This very apparent reality makes the rest of the film edge of the seat stuff, especially for someone like me, who suffers vertigo anyway.

The stunt work is the centrepiece of the film and over and over director Renny Harlin and his team deliver breathtaking work that nobody (except maybe Tom Cruise) would even be likely to attempt today, when stunts are often entirely digital. The most jaw dropping moment comes when stuntman Simon Crane, at 7000 feet, transfers himself across a wire between two planes. It’s one of those stunts you can’t quite believe you’re seeing. Combined with some incredible climbing work both by the actors and by their hugely accomplished doubles (all well shot by Harlin, maintaining the illusion that Stallone and Rooker are doing more of the work than is actually the case), it makes for some incredible spectacle.

Renny Harlin has a mixed filmography, but this is one of his best directed films. The sweeping cinematography of Alex Thomson emphasises the scale and space of the real locations. Harlin gives the action a real feeling of peril through his shot selections, finding ways to bring visual depth without the 3D process. I’m actually a little surprised (though relieved) that Cliffhanger hasn’t been post-converted yet, it certainly lends itself to the idea more than Predator or Terminator 2. Harlin also knows how to pace an action film, and within that an action sequence. The larger scale sequences, like the plane crash at the beginning or the bonkers helicopter sequence at the end of the film, sit well alongside more personal hand to hand fights, like the one Stallone has with Leon or Rooker’s face off with former Eastender Craig Fairbrass.

Along with the writers – John Long is credited with the story, Michael France and Stallone with the screenplay – Harlin sets a tone that is fairly tough. There is less emphasis here on wisecracks (Arnie would definitely have had a joke ready when he impaled someone on a stalactite). Cliffhanger strikes a fine balance between feeling realistic and traditional action movie silliness, perfectly illustrated by how it deals with Stallone losing his jacket and sweatshirt. Initially he has to give them up when, sending him to retrieve a case of money in an almost impossible to reach spot, the gang wants to make sure Gabe will come back. For a while the film engages with the consequences of Gabe having to run around on top of a mountain in just his T shirt, but by the end of the film it knows we’ll happily suspend our disbelief, even when he is submerged in ice cold water. This, for me, is just the right balance: serious enough for there to be stakes, silly enough to be fun.

This balance is something we also see in the performances. Stallone is Stallone, he’s doing his stoical traumatised hero thing and he does it well. Gabe isn’t the world’s deepest or most unique character, but the script and the performance hit the right emotional notes when it counts and otherwise Stallone’s presence drives the film well. Around his star Harlin puts a cast of solid character actors. Michael Rooker is always good value and here he’s an effective physical contrast to Stallone. You can see how these two would complement each other on a team. Janine Turner gets a bit short changed, she’s set up as an ace helicopter pilot and there’s a toughness to her Jessie that it would be fun to see pay off more in the third act. John Lithgow, cast late after Christopher Walken withdrew, is unusual casting for an action film, but he’s an appropriately bastardly bad guy, and clearly having a lot of fun. Also well cast is Rex Linn, who seems to have made a career playing that cop you’ve seen in something else. He’s totally credible as a career government agent who decided to take his chance at the big money when it came, but is regretting the company he’s had to keep.

As I said, Cliffhanger is, the setting aside, back to basics stuff. It’s basically Die Hard on a mountain (very literally in one scene when Stallone is pulled towards a cliff edge and has to break the rope tied round his foot). It’s the film that Stallone needed to deliver at this point in his career. It leaves behind much of the cheese factor of 80s action cinema and deliver big stunts, great action and heroes and villains drawn in broad black and white strokes for us to cheer for and hiss at. I don’t want all action films to be Cliffhanger, there needs to be room for more than a great stunt show, but this is high level genre filmmaking. It looks fantastic, thanks to the almost entirely physical action and the script and performances deliver exactly what we need to power the film between those moments. It may not be great art, but it is one of those films that I can put in the blu ray player just about any time and enjoy as a pure thrill ride. We shouldn’t undervalue that.