The love of movies seeps into all of Dante’s films, whether it’s that they fondly recall earlier films (Piranha (1978) parodying Jaws, Gremlins (1984) as a play on It’s A Wonderful Life or Innerspace (1987) as an uncredited comedic remake of Fantastic Voyage) or that movies are important to their characters (Gremlins again, with Billy’s love of movies and collection of Famous Monsters of Filmland, carrying right through to the horror movie loving main character of Burying The Ex (2014)). Matinee falls squarely into both camps, and is both Dante’s fondest homage and his most profound statement on cinema, its purpose, its meaning and its importance to fans.

Set in Key West, Florida, Matinee sees producer Lawrence Woolsey (John Goodman, playing what is essentially a variation on legendary B Movie producer William Castle) coming to preview his latest monster movie “Mant!” and his new process Atomo-vision during the Cuban missile crisis of 1962. Army brat Gene (Simon Fenton) is desperate to go to the screening and meet his hero, while navigating being the new kid at school, going on his first date with a girl from school (Lisa Jakub) and possible nuclear annihilation. 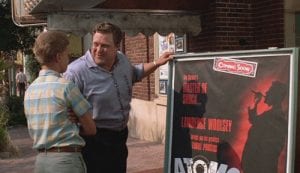 Matinee is many different films. It is to some degree a nostalgic look at small town life in the sixties, with the cuban missile crisis writ large as an acknowledgement that perhaps under the surface all wasn’t as swell as the public face America presented to the world. Dante also pokes fun at the panic surrounding the crisis, through vignettes like two grown men in the supermarket being told “one of you will have to go to the Atomic Destruction with no damn Shredded Wheat!” and larger plot points like the paranoid cinema manager (Dante regular Robert Picardo) who carries around a radio tuned to the emergency setting and has a fallout shelter in the basement. There are also jokes at the expense of moral panic, as Woolsey gets a couple of actors (Dante regular Dick Miller and John Sayles) to stage a phony protest against Mant! It’s interesting that this scene, while it certainly plays on the ridiculousness of such moral panics, also makes the right on hippie parents of Sandra (Lisa Jakub) targets of its joke.

It’s also a sincerely sweet and funny coming of age movie. Gene, the perpetual new kid, is the outsider at school, but his supposed inside knowledge thanks to his Dad’s position on one of the blockade ships wins him new friends, notably Stan (Omri Katz). Both of them are going through their own coming of age drama, Stan being threatened by his potential girlfriend Sherri’s (Kellie Martin, best known as Lucy Knight in ER) older boyfriend (James Villemaire) and Gene finding himself on a first date with Sandra, a smart girl who gets detention for protesting that ‘duck and cover’ won’t help in the event the bomb drops.

Gene’s coming of age story runs deeper than that nascent interest in Sandra. He is forced, at 14, to be the ‘man of the house’ while his father is away, expected to take on a lot of responsibility for his younger brother Dennis (Jesse Lee). Their relationship is one of the film’s best drawn and most touching, Gene clearly loves his brother and they both relish the monster movies that they go and see together, but at the same time a 14 year old doesn’t always want an 8 year old hanging around cramping whatever style they have, but of course when Dennis is in danger when Woolsey’s Atomovision system goes wrong, Gene steps up. The relationship between Gene and Sandra isn’t a major theme during much of the film, but their encounters at school are fun, take this exchange when they are talking about her getting detention:

Sandra: They put Gandhi away for a year.
Gene: I don’t know that many people around here.

Their date comes about by circumstance rather than arrangement, they see each other at the screening of Mant!, decide to sit together and it evolves into a proper, if unconventional, first date. One of the film’s most charming sequences comes when Gene and Sandra accidentally get locked in the bomb shelter under the cinema. Thinking the bombs are dropping, they ponder being the only people left alive, and their first kiss (which was also actress Lisa Jakub’s first kiss) comes after they talk about perhaps having to repopulate the world. This sequence is beautifully written by Charlie Haas, capturing something that is both a unique and a universal moment in a funny way.

Stan’s coming of age story concentrates on his infatuation with Sherri and the conflict with her former boyfriend Harvey Starkweather (the name is a nod to Charles Starkweather, whose crime spree with his younger girlfriend Caril Ann Fugate inspired Badlands (1973), among other movies). Harvey is one of my favourite characters in the film; an outrageously dumb man with a violent streak and a penchant for writing perfectly awful poetry (“Tomorrow’s a knife. Tomorrow’s a big knife.”) Stan is that kid we all knew in school who exaggerated both his confidence and his experience, something we see in the way that one threat from Harvey is enough to make him cancel a date with Sherri, using a thrown together and not terribly convincing lie. Omri Katz plays him with charm though, and it’s another nice step in both of their stories when, at the screening, Gene helps him smooth things over with Sherri.

Matinee is also a loving and hilarious homage to the B movies of the 50s and early 60s. We have to believe that the films Gene and his little brother go and see are real, but they also have to be just that little bit heightened. The film straddles that line perfectly, first with the spoof family film The Shook Up Shopping Cart, featuring a young Naomi Watts as a woman whose Uncle has been turned into a sentient shopping trolley, then with Mant! itself. We see quite a bit of Mant! The film’s third act takes place entirely at the screening, which descends into chaos. The film within the film is full of little homages to actual 50s monster movies, such as original Invasion of the Body Snatchers star Kevin McCarthy and other 50s sci fi stars turning up in the cast and images that recall well known films (the whole look of Bill as Mant! owes more than a little to the original version of The Fly, while the film as a whole owes a debt to Them!, among others). Again, Dante stays just the right side of parody. Things like the moment when a giant ant is attacking the Army and a general asks “what do you call that thing?” only for Cathy Moriarty’s character to say “Bill” are ludicrous in that way that some of these movies really were. Date pushes everything; the hammy acting, the framing, the hokey writing, just a little over the top. He satirises while keeping the film something you can believe an audience in 1962 sitting down to watch, and enjoying unironically (indeed the full 20 minute version of Mant! that appears on the Blu Ray releases as an extra is an absolute joy in itself.

Outside of the films themselves, Matinee engages with the joy of the experience of cinema. Woolsey is a producer and a director, but more than anything he’s a showman. That comes across in Goodman’s larger than life performance, he’s always on, and believes that everybody around him, from his long suffering and sardonic actress girlfriend (an hilarious Moriarty) to the kid who rips the tickets at the screen door should also always be on. John Goodman is perfectly cast as Woolsey. He has the presence to pull off the showmanship, but also the warmth for the scenes in which Woolsey lets Gene help setting up the performance of Mant! You get the sense that Woolsey sees a kindred spirit in the kid, someone who is as excited by the possibilities of movies as he is. Woolsey treats movies as a performance, the antithesis of the herding mentality behind the multiplexes of today. At least until things begin to go wrong at the screening, we too are seduced by Woolsey’s showmanship. The film may be hokey, and the same may go for the seat buzzers and the guy in the ant costume running through the auditorium, but it’s an experience few of us will have had at the cinema and it looks like great fun; the movies at their unifying best. 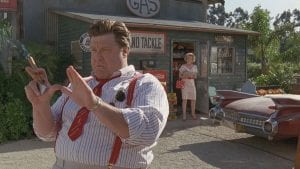 This is the other thing that Matinee celebrates: the power of cinema and the purpose and effect of cinephillia. This is where I feel the film at the most personal level. The year before Matinee’s release was when I became truly obsessive movie fan. It happened when I was in hospital for a transplant. I was in an isolation room for weeks, with no company apart from my parents and doctors and nurses, it wasn’t a fun place to be as an 11 year old. Movies were my escape, for an hour and a half or two hours at a time I didn’t have to be in that hospital room, because I could be off on an adventure with Indiana Jones or the Ghostbusters. That’s what I think Matinee is about at its heart. The Cuban missile crisis was an event that, at some level, put an entire country in that hospital room, lives were on pause. Matinee says that the value of movies, and especially scary movies, is that they can take us out of that reality and that once we’ve survived the fictional threat we can be less scared of the real one. It’s a powerful message, wrapped up in a film that is equal parts celebration, analysis and parody of its subject.