Okay, campers, rise and shine, and don’t forget your booties ’cause it’s cooooold out there today. It’s coooooold out there every day. On Friday we discovered that the winter of 2018 will continue for another six weeks, based on the fact that a Groundhog – a type of large ground Squirrel – saw its shadow. […]

On Friday we discovered that the winter of 2018 will continue for another six weeks, based on the fact that a Groundhog – a type of large ground Squirrel – saw its shadow. To be honest, it’s probably not the least accurate weather forecasting system we use. I’d wager that if you’re reading this anywhere other than the United States, you’ve known about this tradition for a maximum of twenty five years, thanks entirely to this film.

The setup is brilliantly high concept. Irascible weatherman Phil Connors (Bill Murray), his new producer Rita (Andie MacDowell) and his long-suffering cameraman Larry (Chris Elliot) are sent to cover the Groundhog Day festival in Punxsutawney, Philadelphia. Phil hates both the assignment and the place but, trapped by a blizzard, has to spend an extra night there. When he wakes up, it’s Groundhog Day again. And again. And again.

Comedy is tough to analyse, you can kill a joke when you dissect it, but Groundhog Day positively invites you to look at it in more depth than as the simple conceit – Man becomes better person by having to relive the same day until he gets it ‘right’ – it presents. There’s the philosophical level: what is the ‘right’ way to live a day? To what set of rules must Phil adhere, and how did those rules come about? Groundhog Day touches in only the lightest ways on religion, but it certainly has religious implications if you go down that road. All of this, of course, is before you consider what has happened to reality beyond Groundhog Day? Is the Matrix suspended in the background while this one guy gets to try to fix his life?

Then of course there are the practical questions. We see 38 days during the film, but it’s clear that Phil spends much longer than that reliving Groundhog Day. By the end of the film he has mastered ice sculpture, sleight of hand tricks and can play the piano at a professional standard. He also knows the minutiae of the lives of almost every other speaking character in the film, and exactly what is going to happen at any given moment, just about anywhere in town. Imagine how long this must have taken. The initial plan was to have Phil trapped for 10,000 years, but that was dropped during rewrites. Estimates of how long he actually spends living Groundhog Day range from Harold Ramis’ guess of 10 years to an exhaustive analysis that suggested it was closer to 30.

Of the ways to kill a joke, repetition can be just as successful as over-analysis, but Phil’s varying reactions to being trapped in Groundhog Day manage to keep the film’s comedy fresh even as the setups remain exactly the same. Ramis and Murray play well on this idea for laughs (as in the series of scenes with Ned Ryerson) and for Phil’s growth as a person (the series of dates with Rita as he tries to re-create a perfect day they had once).

Apparently, Bill Murray wasn’t the first choice for the part of Phil, which is understandable, his look doesn’t exactly scream romantic comedy lead. Tom Hanks was a name bandied about, a much more conventional choice but one rejected on the grounds that audiences might not buy him as the more irascible Phil we see for the bulk of the film, before he concentrates on wooing Rita and becoming a better person, initially as a tactic and eventually as a result of that pursuit. Hanks can play more than just the aw shucks everyman, but it is tough to envision him executing the “I’m a god” conversation in the diner with anything like Murray’s hilariously matter of fact delivery. Ultimately Murray is perfect casting. He has a natural tetchiness about his comic persona that works for Phil, but also a certain charm that he can play either as oily or sincere. Murray strikes a lot of different comic notes here, from the baffled reaction to the first time the day repeats to stinging cynicism as he begins to resent being trapped more and more to a gentler wit as he begins to understand how he’s meant to live this day ‘right’.

Chris Elliot also scores a lot of laughs as Larry (his super dry reaction to Phil kidnapping the groundhog and driving off a cliff is a highlight), and a lot of the supporting players get their moment to shine (Robin Duke as Doris the waitress, trying desperately to get out of having to take Phil’s order while he’s explaining to Rita that he’s not THE God, may be my favourite). Unfortunately there’s still something of a hole at the centre of the film for me. Andie MacDowell has more hair than personality, and that’s a real problem. Rita just isn’t an especially interesting or inspiring character, beyond the fact she’s attractive it’s hard to see why Phil falls for her and thus why the universe seems to feel the need to conspire to force this match to happen. Does falling for her make Phil a better person? Sure, but do I buy that lasting once he’s back in the normal space time continuum? I’m not so sure about that. It’s not that MacDowell is bad in the film, she’s just not that interesting. You could lay that at the door of the screenplay which, beyond a veneer of 90’s career woman cliches, gives her little more to play than the idealised object to pursue, but her blandness does seem to be a recurring theme in her work. 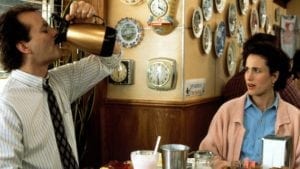 One of the film’s most important characters is Punxsutawney itself. In how it presents the town, Groundhog Day is much like staring into an unusually detailed snow globe; it’s pretty, quaint, and you get the feeling that even if the glass walls surrounding it lifted, it would remain much the same. The town provides a lived in backdrop for the film, and as it goes on we begin to get a sense of the place and a feel for the people. The nature of the story means that the characters around Phil don’t always have much depth, but they’re not just archetypes either. When Phil takes the time to interact, whether it’s with Nancy (Marita Geraghty), who he takes on a day long date before shifting his focus to Rita or Debbie and Fred, a couple of young newlyweds (Hynden Walch and, in his first feature film, Michael Shannon), we get enough of a glimpse of them to have an idea of their lives and personalities beyond this one day. This is a perfect indicator of just how beautifully made Groundhog Day is. The script is perfectly pared down, but rich enough to give the actors something to play, even in small roles, but it’s in the casting that I think much of the film’s richness lies. Michael Shannon is a perfect example of this, he has two tiny scenes, both are memorable, but it’s the first that sticks out for me. As Phil is demonstrating to Rita how much he knows about everyone in town he introduces Debbie and Fred, telling Rita they’re getting married, but “Debbie’s having second thoughts”. For the rest of the scene we can see Shannon in the background, playing the aftermath of this moment with all his customary intensity. It’s this and other moments like it that give Punxsutawney its pulse in the movie.

25 years on, Groundhog Day is, for me, enhanced by its familiarity. It’s a comfort movie, a warm hug on a winter’s evening. We know the characters and the jokes like old friends and a certain level of repetition keeps them in the back of our minds until next time we need theem. I’m not sure I’d want to watch it every day until the end of time though.